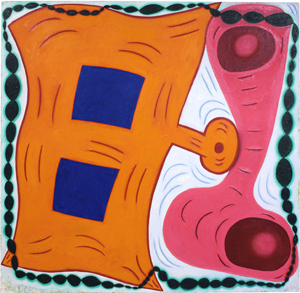 From the very beginning of her career through the monumental retrospective last year at The Museum of Modern Art, Elizabeth Murray has never lost sight of the humanity and dignity of her work. Unlike some of her contemporaries, whose relationship to art history amounts to borrowed sources for superficial personal pastiches, Murray’s art has become a true conduit of the past into the present through her humility, ambition and love of art.

Unlike her landmark paintings of the 1980s, in which Murray employed an arduous system of modeling that freely mixed local color with earth tones to create a strangely acidic and unnamable pitch, her recent work (on view at Pace/Wildenstein from October 13 to November 11) is both a personal breakthrough and a return to the flat surface. She confidently overcomes cubist structure and Cézanne’s anxiety. Take “So Long Maryanne,” a straightforward canvas that revisits some of the familiar biomorphic forms from the late 1970s (usually seen in pairs). The forms, at first glance, are animatingly playful, though one senses a symbolic importance. In my personal reading, they present a family portrait: the blue squares represent the painter and her two daughters, while the shapes on the right resemble a pipe / pencil configuration that suggests her husband, the esteemed poet Bob Holman. A string of beads, not unlike the one that once appeared on top of similar shapes in “Joint” (1980), here rotates around the painting’s edges. This is one of the most compelling paintings in this show, bursting with the artist’s courage and enthusiasm for life.

“Kind of Blue” (2004) resonates with a musical range that, for me, hasn’t been captured in painting before. Unlike Mondrian’s boogie-woogies or Stuart Davis’ jazz tropes, Murray’s sound is a hybrid of opera, jazz, blues, rock n’ roll, and even hip-hop and rap. There is no hierarchy in the painting’s constructed parts, because each is equally essential to the image as a whole. “Baby Snakes,” “The New World,” and “Ai Yi Yi,” all painted this year, embrace the pictorial brilliance of pop culture: Spiderman; Keith Haring’s Pop Shop; a hip-hop dancer in the street. Murray has never seemed more free, more colorful or closer to the urban spectacle of crowds, traffic, flashing lights, noise and music.

Dr. Edward Young, the 18th century British poet said, “Why is it that we’re all born originals but die as copies?” Murray has persevered as an original, infusing her art with a joyous anarchy, incorruptible and indomitable in the face of time and worldly calamity.

Each morning for 28 days, performance artist Kyoung eun Kang inhabited the late Elizabeth Murray’s upstate New York studio. These sessions, recorded with a stationary camera, have been edited into a two-hour single-channel wall-sized video projection that makes Murray’s studio seem like a continuation of the physical space of A.I.R.’s darkened Gallery II.