This is the third collection of American composer Morton Feldman’s words to appear in print. Valuable though it is, it suffers from the same general omission as its predecessors: It fails to reproduce Feldman’s monumental jokes. The strongest one in my head recalls his having dinner with the over-inflated German composer Karlheinz Stockhausen on 57th Street. When Stockhausen suggests that “Germans and Jews are very much alike,” Feldman replies, “Yes, there’s nothing I’d rather do more than put three million Germans in concentration camps.”

This wisecrack has not appeared in print before, to my knowledge. I think I heard it around 1980 from my fellow composer Charles Dodge, who was seeing Feldman frequently at the time. Indeed, every time I saw Dodge he had another Feldman joke to retell. Everybody hearing his classic cracks passed them on. Even in the highly articulate world of contemporary composition, Feldman was very much king of the hill. 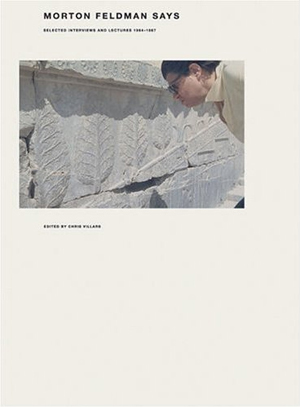 When the editor of an earlier Feldman collection told me of his intention, I suggested that he, roughly the same age as Feldman and his friends in the 1950s and 1960s, would do this late friend the greater favor if he collected these jokes in addition to reprinting writings and interviews. He didn’t, short-changing their friendship and his own love for Feldman’s wit. Nor did the current editor, who lives in England and apparently didn’t know Feldman. In nearly three hundred pages, double-columned with small print, the only quotable quip holds that “one of the tragedies of music education is that it doesn’t produce composers” (which was incidentally almost totally true of his own tenure; no Roger Sessions was he). Perhaps Feldman’s biographer will reprint some of them, but he or she had better hurry, because the informants are disappearing. (The worse fate would be to publish a work like Anthony Tommasini’s “definitive” Virgil Thomson biography, which misses its subject’s monumental wit, which can incidentally be found in biographies and memoirs of Thomson’s friends.)

Though Feldman and Cage are commonly lumped together in histories of contemporary music, they were fundamentally quite different. Whereas Cage aimed for invention in composition, impersonality in execution, and trust in performance, Feldman’s music depends upon his claims to superior taste and precision in performance. Whereas the best Cage is maximal, Feldman is minimal. Also, once Feldman became a professor in his forties, he began to compose impossibly long pieces, such as a string quartet lasting six uninterrupted hours, that none other than students, preferably graduate students, would initially perform.

One problem with Feldman the funnyman was that though he made jokes, he didn’t accept jokes made about him. When I solicited his permission to reprint John Cage’s replies to their classic 1966 dialogues (in my Conversing with Cage), he responded, only if I used his words as well. Since my book included questions only insofar as they prompted Cage’s replies, I suggested to Feldman that if I made an exception for him readers might think me his lover or drug dealer, which I thought at least amusing. I never got a reply, alas.

This past summer, the Seattle avant-garde poet Nico Vassilakis did two New York performances of Mort, as he called it, with himself as the composer. Dark-haired, bespectacled, broadly built, and hulking, he certainly filled the silhouette far more memorably than he spoke the lines, eschewing his model’s classic Brooklyn accent. My sense was that Vassilakis too could have made a better selection from Feldman’s words.

Motherwell, Drawing Between Painting and Print

Because drawing was Motherwell’s medium of greatest immediacy—as fast as a bullwhip, he said—its capacity for speed of execution allowed him to set down multiple ideas in quick succession and therefore to work out those ideas over a more extended period of time.

What To Do When You Grow Tired of Words

In her luminous and searching essay, theatermaker Jeesun Choi uses her multifaceted identity as a springboard to explore the social justice-oriented words, acronyms, and phrases that have flooded our world over the past year—and how these words might be, and only be, shorthanded expressions unable to fully unpack increasingly complicated issues.

The mask made it difficult to see his smile from ear to ear, but you could see it in Miguel’s eyes. Colorful large-scale prints covered all the tables at Brandywine Workshop and Archives’ (BWA) studio in South Philadelphia. The happiness and satisfaction of the completion of a successful project was hard to miss as he stared at the project he had just completed.