In Capote—last year’s filmic recreation of Truman Capote’s sojourn to Kansas to write what became In Cold Blood—the lisping, diminutive man in fedora and furs wins over the skeptical middle Americans in khakis and crewcuts with the help of a childhood friend, the novelist Nelle Harper Lee. With her soft-spoken Southern kindness, she puts the Kansans at ease, giving Capote the entrÃ©e he needs to get answers. 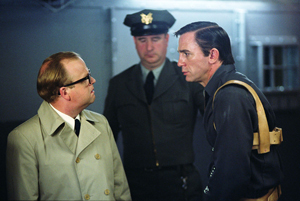 Toby Jones as Truman Capote and Daniel Craig as the object of his affection, Perry Smith. © 2005 Warner Bros. Entertainment Inc.

In Infamous,2006’s filmic recreation of Truman Capote’s sojourn to Kansas to write what became In Cold Blood, Harper Lee comes along, but she isn’t much help. Truman wins the trust of the locals by boasting that he once out-arm-wrestled Humphrey Bogart.

In Capote, when Truman opens the morning paper and reads about the gruesome murder of a Kansas family, he calls his editor at the New Yorker to propose an article. In Infamous, the first person Capote calls is one of his high society “swans.” He asks her to lunch.

Together, these scenes typify the difference between the two films. They cover nearly identical chronological ground, and include some nearly identical scenes—Truman in his Kansas hotel room, going over the day’s notes with Nelle; the manacled murderer Perry Smith staring blankly out a car window on the way to the hangman. But Capote was about a writer, and, by extension, the story he wrote. Infamous is about a man—a damaged, conflicted, tormented man—and the story he lived, reenacting, at his peril, his mother’s tragic ambition to be a Park Avenue socialite. Both movies aspire to be a Faustian parable about the artist who sold his soul for a masterpiece and never quite recovered. The hard-boiled, creepy Capote of Capote deserved whatever he got. The Capote of Infamous is harder to fault. Barely hiding his insecurities beneath a caviar-and-scotch veneer, this Capote doesn’t stand a chance in negotiation with the devil.

As Truman, the British stage actor Toby Jones surpasses Philip Seymour Hoffman’s chilling, Best Actor Oscar-winning turn. This is in no small part because Jones bears a remarkable resemblance to Capote. For Hoffman to play Capote so successfully required a physical transformation; for Jones it seems natural, though hardly effortless. That voice alone demands hours of training.

An unusually dowdy Sandra Bullock is especially poignant as Harper Lee, projecting her insecurities about her own writing upon her every assessment of Truman. In contrast, Catherine Keener’s serenely confident Lee was a moralizing cipher. As the gaggle of socialites with whom Capote gossiped, drank, lunched, and gossiped some more, the quartet of Juliet Stevenson, Sigourney Weaver, Hope Davis, and Isabella Rossellini are as lovely as Tiffany baubles—and as impenetrable. Unfortunately the acting in the smaller parts is uneven, in particular the remarkably unconvincing Jeff Daniels, as the small-town detective Alvin Dewey, and Lee Pace, as Dick Hickok, the less interesting of the two killers. Pace splashes lamely through scenes with Jones like a swimmer who can’t keep up with the tide. A film with so many bravura performances makes mediocrity stand out all the more.

Visually the film is quiet but rich, made with a painterly attention to color. In nearly every scene a single, tantalizing detail stands out, whether for purely aesthetic satisfaction, as with the powder-blue telephone in Truman’s glintzy red-and-gold apartment, or to make a thematic point, as with Truman’s bright red coat on a whitewashed Kansas porch. The stunning panoramas of a cloud-swirled Kansas sky are as meticulously composed as the interiors, including a painstakingly recreated Club Morocco.

But for all this attention to detail the film as a whole seems incoherently conceived, in places a faux-documentary, complete with mock interviews; in others a film-as-novel, the vision of an omniscient third-person consciousness, complete with childhood flashbacks. And it veers towards melodrama when it links Truman and Perry through a shared connection of childhood abandonment and adult pain. Certainly the connection can be made, but by attempting to make it through cliched flashbacks and insufficiently developed personal history, Infamous feels at times like an exercise in oversimplified pop sociology.

The bond between Truman and Perry Smith was also, of course, at the center of Capote, which went so far as to have Truman say, “It’s as if Perry and I grew up in the same house, then one day, he walked out the back door, and I walked out the front.” But in that film Truman remained aloof and manipulative to the end. Capote may have cared deeply for Perry, but he never lost sight of the book at the end of the tunnel. And the book needed an ending: Perry had to hang.

Infamous, in accordance with its vision of a more vulnerable Truman, suggests that his interest in Perry was romantic, even sexual. Perry (the charismatic Daniel Craig, recently cast as the new James Bond) has almost as much control over Truman as vice versa. In Capote, when Perry Smith—imagined by Clifton Collins, Jr., as a sniveling loser—learns that the book is to be titled In Cold Blood, he feels betrayed. Truman placates him by lying, saying the title was given prematurely to the book-in-progress by sensationalist publicists. When Perry learns the book’s title in Infamous, he is furious to the point of violently assaulting Truman; Truman’s response is to convince Perry that the title refers to capital punishment as much as to murder. Truman even allows Perry to read a sample chapter or two, and waits breathlessly for his approval.

There’s no evidence of any romantic involvement between Truman Capote and Perry Smith, but there’s also no evidence that there wasn’t any. The suggestion of such an affair concretizes Capote’s obsession in a way that Capote does not, thereby seeking to motivate his crippling sense of loss. The Truman of Infamous is destroyed by Perry’s death. The Truman of Capote was destroyed, in a way, only by the extent to which Perry’s death did not destroy him, almost as though Capote felt it should have. Tellingly, the Truman of Infamous runs out of Perry’s execution, unable to watch.

To ask which film is “truer” is a dead end; the real question is how both movies got made in the first place. When two studios are making the same film at the same time, one usually caves. Apparently Warner Independent believed that there would be sufficient interest in another Capote film to let Infamous proceed. They may be right; the past two years have seen a flurry of fascination with Capote even beyond the two movies, with new editions of his collected stories and letters and early novels. You don’t have to like Truman Capote or admire his writing to see that his life is full of dramatic opportunity.

Exploiting anyone’s life for drama raises ethical and aesthetic questions about the line between fiction and truth, especially when it’s the life of someone who blurred that line in his life and work. Capote accepted Truman’s claim to have invented a new form of literature, a “nonfiction novel,” giving its ludicrously fictionalized New Yorker editor William Shawn the line, “This book will change how people write.” In Infamous, even the gossipy swans have qualms about Capote’s journalistic methods. What bothered people about In Cold Blood, both in life and in Infamous, was not Capote’s blurring of boundaries per se, but his supreme confidence in his approach and his unwillingness to consider any arguments against it. “His claim to an unprecedented art form gives cause to wonder,” wrote Ned Rorem, the composer. “An artist must, at any cost, expose himself: be vulnerable. Yet Capote the man, in his recent work, is invisible.” Capote made the man visible but Infamous exposes him. One can guess which film the man would have preferred, but the Capote of Infamous is, ultimately, the more human.

SARA MAYEUX is a student of 20th-century history and sometime writer who lives in Brooklyn.