A campsite in the woods, strewn with an orange couch, a gold Volvo station wagon, and three people, each involved in their own action, but working together—the composition of a photograph, of a film being made.

The warmth of this image in the New York Times caught my attention. As I read on, I learned that the film was Old Joy, directed by Kelly Reichardt and adapted from a short story by Portland-based author Jonathan Raymond. According to the profile of the filmmaker, the film “mourns the vanishing of Utopian ideals—a loss that it views as a consequence of advancing age and a sign of the times.” The photograph invoked the warmth of the reality on set: three people, each involved in their own action, but for the most part, friends (she works with a small, close group of collaborators). After reading more about Reichardt’s past work, River of Grass (1993), Ode (1999), And Then A Year (2002), and Travis (2004), I developed an interest in her choices. 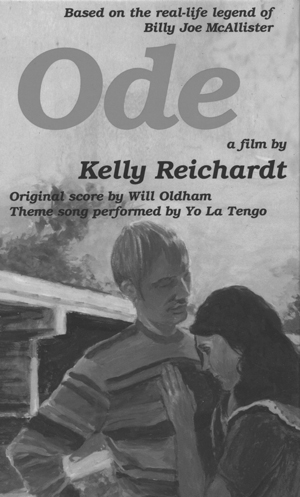 Reichardt’s choice of material, the origins, and her approach, gives me a feeling similar to the work of other contemporary artists such as Amy Cutler and Marcel Dzama. The original story for Old Joy was a collaboration between Raymond and photographer Justine Kurland, who is known for her staged tableaus. While Cutler and Dzama work with a variety of characters and morph them, cut them up, Reichardt’s characters are allowed to embody a wide space, drawing out a number of interpretations.

I decided to find out more about Ode. It turns out to be a fifty-minute film with an accompanying instrumental score by Will Oldham, titled Ode Music. The film is based on Herman Raucher’s 1976 novel and screenplay, both commissioned by Warner Brothers, called Ode To Billy Joe. All of which spawned from the eponymous 1967 original folk song by Bobbie Gentry. Reichardt’s film Ode was hard to find, so while I waited for a copy to come in the mail, I decided to start by listening to the original song, reading Raucher’s novel, and watching the original film.

“Billy Joe McAllister jumped off the Tallahatchie Bridge”: the sixth line of the song, and the quote on the paperback and VHS case. A whole narrative in one line; you might just think you have the whole story.

Bobbie Gentry, born and raised in Chickasaw County, Mississippi, places her two young lovers in the same state in 1953. She focuses her lyrics, recorded with raw vocals, on the isolation that Bobbie Lee experiences due to a rural setting, a sheltering family, and forbidden love for Billy Joe. The isolation is sung as innate to her experience, more than a reaction to Billy Joe’s suicide. And the reason for his suicide is evoked with the overall feeling that Billy Joe had a hard life, often knocked as a degenerate, without a lick of sense, and because of this, he could never have the one girl he loved. The song circles around the same melody for its roughly 4 minute length, creating an air of a slow southern town, when falling in love and touching each other is the better thing to do, until the end of each refrain, when Gentry sings, “...Off the Tallahatchie Bridge”, dipping low into a bluesy, melancholic sound, signaling the loss ensued by such feelings, from such two people as Bobbie Lee and Billy Joe.

Gentry’s song won four Grammy’s the year it came out. In the ’70s the story became a pop phenomenon. Several covers ensued, from Ella Fitzgerald (1967), Howlin’ Wolf (1973), and Clarence White (1978) among others. Though the story continued to be interpreted in songs, it was Raucher’s novel (though packaged perhaps more as an afterthought for the original movie) that grabbed my interest. The book is full of nostalgia, but it’s retold for a different era. The story still takes place in Mississippi, 1953, but in retelling, Raucher adds a new reason for Billy Joe’s leap from the Tallahatchie Bridge: homosexuality. After a drunken encounter with another man, he finally has his chance with Bobbie Lee, but he can’t go through with it because of the guilt. Billy Joe feels the burden of religion and a life he can’t live.

Raucher’s other addition is a further emphasis on the female experience. Bobbie Lee becomes more hyper-mature and feistier than the girl in the song, and she reacts to the indifference expressed by her overbearing family. Written in the ’70s and marketed toward ‘70s kids, the story succeeded with its audience by using both the nostalgia and exaggerated teenage repression of the ‘50s era. And with a character named Belinda, a stripper who is shunned by most people in town, Raucher keeps her frame of mind contemplative and in control, even when Bobbie Lee’s brother James roughs her up for sex. As women rarely had substantial roles in ‘70s films, and were viewed more as sex symbols, Raucher’s portrayal mirrors the status quo in a sense, though he shows the female characters as vibrant and strong willed, with voices of that contemporary social climate.

Now that the story has been told once again for a different era, this time by an avant-garde, low budget filmmaker working with super 8 film, there are glimpses of the present. Bobbie Lee now has dial-up Internet, not to mention indoor plumbing, and flirts with Billy Joe by email. However, Reichardt maintains connections to previous threads of time. Using the soft focus, the division between past and present is blurred. The visual sensation of looking at an undeveloped photograph is a cinematic parallel to the first film’s nostalgia.

The stretch of road in Reichardt’s production that includes the Tallahatchie bridge is seen several times before the bridge is referred to by name, but even then it’s hardly seen; no more than a short concrete-barrier stretch with no rise. Whether this reduction of scale is a metaphor, or merely a budget issue, is unknown. But when Bobbie Lee and Billy Joe first walk across the bridge, we see how small these characters are, on a road where a bridge is nearly unnoticeable. And not only smaller, but more overtly lonely, passive, and marginal. You feel Bobbie Lee’s loneliness because of Reichardt’s choice to isolate her in most of the scenes—one image has her smoking a cigarette in an empty schoolyard. She’s never really around any of her friends, the ones that surround Bobbie Lee in Raucher’s narrative.

Billy Joe, as in the original film, is oppressed by religion, but no longer bothers with the social grace to cover it up. To win the heart of Bobbie Lee, he runs across town looking meet her at the Baptist church, where her father happens to be a deacon. Excitedly, he stops at the Catholic church and asks if he has the right place. The priest says “No, but you’re welcome to come in here.” Next we see Billy Joe painted as the typical outsider, troubled beneath the steps of the establishment, as he broods on the ground with his back to the church doors.

Taken just from the film, Oldham’s album consists of four songs repeated, plus one climactic Ode, making an album of ten Odes, that invoke the walk slowly back and forth across the bridge that Bobbie Lee makes to get home from school. The film, narrated with the music, captures the original song’s dreamy repetition and droning pace.

In her choice to do this film, I see Reichardt drawn to retell stories of forgotten or misplaced characters because of an urge to fuse them with a contemporary landscape. Her way of doing this creates a quality of timelessness. In both Raucher and Reichardt’s stories, Bobbie Lee is hyper-aware of her age. “It destroyed Bobbie Lee to be fifteen. She had the sickening feeling that she’d be fifteen for thirty-five years.” Aware because her family and religion wouldn’t let her grow up at the pace she saw fit. I recently read in Susan Sontag’s journal: “The fear of becoming old is born of the recognition that one is not living now the life that one wishes. It is equivalent to a sense of abusing the present.”

Kelly Reichardt’s film Ode is showing at Anthology Film Archives on October 22, in addition to her films River of Grass, Then A Year, and Travis. Old Joy shows at Film Forum through Oct. 26.