Action director Panna Rittikrai toiled away in the Thai film industry for over twenty years before scoring big with the martial arts opus Ong Bak: Thai Warrior. Rittikrai, (who describes his previous cinematic efforts as low-grade B action films popular among taxi drivers and food vendors), formed his own stunt team, Muay Thai Stunt, in 1979, placing an emphasis on fight choreography. Rittikrai and his protÃ©gÃ©e Tony Jaa utilized Ong Bak to showcase Muay Boran (the ancient form of Muay Thai). Jaa’s incredible prowess in this exotic art made Jaa a superstar and put Rittikrai on the map. 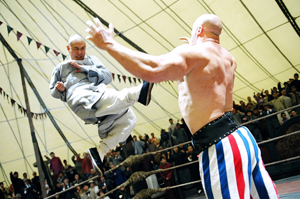 Both Jaa and Rittikrai took their inspiration from the top three: the explosiveness of Bruce Lee, the gymnastic innovations of Jackie Chan and the unequalled grace of Jet Li. Ong Bak tipped the hat to Chan, not so much in mirroring his sense for martial tomfoolery or Keatonesque physical comedy, but in the way Chan integrates sets, props and acrobatics into his stunts. Like Chan, Jaa likes to climb up walls and spring off of everyday objects while beating down foes. Jaa, however takes things one step farther, with a youthful spirit that allows him to literally walk across opponents heads, leap over fire, or do a complete body flip, then kick an adversary in the head before making a solid landing. Moreover, as the Japanese trailer advertised: ‘There’s no need to cheat with CG or wires, and tell the body doubles to go home and take a nap.’

The Protector, Jaa’s latest vehicle, follows the same plot as Ong Bak. This time, instead of a sacred statue head, Jaa must retrieve an elephant. It’s not clear if the elephant is sacred, but it’s very, very important, ok? This is one important elephant. While Ong Bak opened with a fierce tree climbing competition that set a dynamic, fun-loving tone, The Protector gives us overwrought nonsense about elephants as symbols for noble warriors. Even though Jaa comes from a family of elephant herders, the filmmakers should have realized—that with the exception of Dumbo—films about elephants don’t fly.

Jaa’s pachydermic pursuit takes him to Australia (conspicuously resembling Jackie Chan’s Mr. Nice Guy, which was also shot down under) and face-offs with various caricature henchmen. Mum Jokmok, the show-stealing comic relief from Ong Bak, is wasted here as a local cop, with half of his dialogue dubbed into English. To its merit, The Protector features Jaa turning pedestrian environments into makeshift jungle gyms on which are played games of trounce or be trounced. One particularly breathtaking moment has Jaa squaring off with an adversary under a street lamp only to scale the lamp, break into a flip, kick out the bulb and land back in front of his foe who is left mouth agape and powerless.

Jaa’s opponent’s expression in that scene should mirror the audience’s response to the non-stop action throughout the film. But The Protector seems content with recycled ideas—often informed by Jackie Chan’s later, less inspired films—and we’re instead left numb. Yes, Jaa can do a double flying knee kick onto a human target hanging from a hovering helicopter before plummeting to god knows where, but so what? Let’s get back to the real thrill—how Jaa is able to kick ass efficiently and theatrically, making the fights authentic, dramatic, practical and balletic. Underlining the film’s failings is a Chan cameo. The two martial princes bump into each other at the airport and square off as if about to fight, but then share an awkward ‘Don’t I know you from somewhere?’ gaze. The timing is off and the shot, for what should be a simple sight gag, feels too long, reflecting the often rickety production.

Muay Thai purists admired Ong Bak for featuring moves that really work. Jaa eloquently wielded the eight weapons of Muay Thai: two hands, two elbows, two knees and two shins: brutal and to the point. The Protector’s fights are sadly perfunctory. The lack of build-up to the action is underscored by the slapdash editing. Most of the centerpiece fight in the villain’s citadel—imagine the Guggenheim turned into a tawdry Chinese restaurant—ends up more exhaustive than awe-inspiring, with Jaa felling an assembly line of baddies as he ascends to the top floor. Where he’s going or why is never clear.

The more daunting baddies awaiting Jaa on that top floor turn out to be garish, brawny, steroidal ‘foreigners,’ who poses a curious metaphor for the globalization that is taking place with these films’ growing popularity. And what better way to represent the West than with egotistical, ‘bigger they are, harder they fall’ thugs ho lacks any fighting grace or refinement. Curiously, the same crude dumbass types appear as Jet Li’s featured challengers in Fearless, what Li claims will be his last martial arts film. Yet in Fearless, Li’s character exudes such honor and humility that he gains the respect of his most outwardly fearsome adversary, a bald tree trunk of a man in red, white & blue trousers.

Fearless is ‘inspired’ by real life kung fu master Huo Yuan Jia (also the original Chinese title of the film) whose legend stems from confronting arrogant foreign fighters when China’s dominion was threatened by the growing influence of Westernization. Seasoned Hong Kong director Ronny Yu gained cult status with his phantasmagorical masterpiece The Bride with White Hair only to crossover to Hollywood with exploitative fare like Bride of Chucky and Freddy vs. Jason. Yu weaves an epic that feels western in scope yet retains a Chinese tone, evident in the values extolled by its characters. At worst Fearless veers clear of manipulative Last Samurai territory, at best it vies for transcendence through its engaging mythical structure.

The crux of the film’s drama stems not from good versus evil and might equaling right but also from the protagonist’s hubris. Li portrays his character’s varied emotions with the same verve and flair that are trademark of his fighting skills. And Yu ensures that this solid story features plenty of action. Starting the tale at the end and going backward allows us to get straight to the goods, with Huo facing a variety of opponents in the first five minutes. While there are moments of CG effects, they never impede the pure martial brilliance of Li and master choreographer Yuan Woo Ping.

There is almost nothing more cathartic in cinema than ass-kicking with style. Jaa may not have the same poise as Li, and the added brutality of his art may seem crude, yet he is strongly informed by and respectful of his predecessors. Jet Li, meanwhile, has matured into a performer worthy of playing heroes defined not only by their martial artistry but by humanism and restraint as well.

Three recent books on scale throw a sharp light on attempts at human-based measurements. Each book induces a humbling sense of the limitations of human efforts to understand themselves in relation to their environment, an incipient awareness that also suggests the possibility of imagining alternatives.

Cristina BanBan’s Del Llanto is the perfect answer to the tedious, inevitable question, “And what have you been doing during the pandemic?” She’s been mighty busy, so much so that she’s filled two venues, 1969 Gallery in Tribeca and albertz benda in Chelsea, with her efforts: over 30 works in oil, acrylic, pastel, and charcoal.

In 2021 the emphasis is on unity, yet this obvious hit piece aims to unnecessarily create division.