Black Dahlia opens by announcing the logic governing its universe. In the midst of the notorious Zoot Suit riots (conveniently repositioned into the late 1940s), two Anglo Los Angeles police officers beat the shit out of some Mexicans and become allies. They then beat the shit out of each other (in an exhibition boxing match) and become friends. The Zoot Suit Riots, a complex World War II nativist panic that struggled to reassert a racial and cultural status quo, is distilled into the message that the Other can and should be contained by force. Such a reminder comes as close to foreshadowing of the film’s unconscious themes as De Palma is capable. 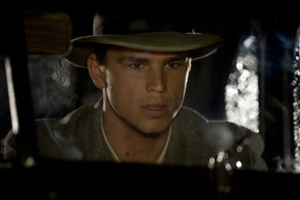 The boxing match—which brings together Josh Hartnett (Bucky) and Aaron Eckhardt (Lee)—asserts that male on male violence provides order in the personal as well as social world.

However, the violent act at the core of Black Dahlia brings not order, but disruption. The real life Black Dahlia murder was certainly a sensational crime, a sexual morality tale. The hideous death of hopeful starlet Elizabeth Short proved the template for pretty much every episode of Law and Order: Special Victims Unit: that is, she was found naked, mutilated, disemboweled. But De Palma’s Black Dahlia rids the corpse of its morbid erotic power, and meaning. Generally, Short has been disinterred by those interested in examining how la petite mort grows. Lust, we know, is dangerous, but how dangerous, we sometimes forget. The surrealist image of Short splayed open amidst nature has time and again been trucked out as reminder. Not in Black Dahlia though. Here, (unlike even in the novel by James Ellroy on which the film is based) Short’s body asserts that womankind, simply by its presence, causes chaos. Since no woman in De Palma’s film acts as a moral agent, the film can’t pass judgment on Short’s supposed hyper-sexed ways. Of course she’s base, she’s a woman. This attitude turns Dahlia into a marker of cultural misogyny rather than sexual hegemony. The historical Dahlia had her eviscerated form plastered on newspaper covers for years and the story that she was a social climbing actress was invented because it so well fit the newspapers’ dual purposes of scandalizing and moralizing. DePalma isn’t interested in those wages of sin. His Dahlia is in the way, just another woman, making trouble. The Black Dahlia isn’t about The Black Dahlia, and it isn’t about sex.

The story centers on the relationship between Hartnett and Eckhardt, and Eckhardt’s girlfriend/Hartnett’s love interest, Scarlett Johansson (Kay). Kay is neither the beard for their homosexual desires, nor a fire that threatens to undo their friendship. She’s the well-dressed girl who cooks for them as they engage in homosocial bonding. In this capacity, Kay’s believable, ‘cause she’s one cold fish. Johansson plays Kay as an under-ripe Lana Turner-type. The role shatters the myth of Johansson as an actress wise beyond her years—when she’s called upon to play an adult woman at turns exuding and inhibiting sexuality, she looks like Christina Aguilera doing an impression of Marilyn Monroe at the Video Music Awards. Perhaps our idea of female sexuality has skewed so pubescent of late that Johansson can’t provide a convincingly sexy performance without channeling Lolita, but the anachronism is disheartening and leaves me nostalgic for the real Lana Turner. De Palma doesn’t care, since the women in Black Dahlia are consistently peripheral.

The particulars of the fictional conspiracy uncovered during the investigation of the Dahlia murder are too incomprehensible to recount. Still, they are not incoherent. Corruption is everywhere, and the universe is amoral. All roads to damnation lead back not to corruption (it’s a given, and even sometimes a virtue to De Palma) but to woman. Dahlia’s first pivotal scene occurs in a lesbian cabaret. Hartnett comes in, searching down a lead, and looks around, bored. There are sufficient chicks kissing to titillate the more sheltered 2006 viewer, and enough shots of Hartnett staring dead-eyed into space to show 1)— that his jaded character doesn’t shock easily, and 2)—lesbians in 1947 weren’t co-opted enough to be hot. Historian Lillian Faderman writes of the late 1940s that “disdain for same sex love spread in a war-exhausted country that wanted only to return to normalcy…” For De Palma, the threat to normalcy comes not only from lesbians but from all visible women. Rather than do his job (suppressing non-whites at every turn) Eckhardt goes after Johansson’s old pimp, and he dies. Because he’s cuckolded by his certifiable wife (Fiona Shaw), an old school tycoon (John Kavanagh) falls into ruination, turning all those around him into murderers. “She made me do it” all the fallen men cry. But the women themselves don’t do anything. They agitate by refusing to disappear.

And the most stubborn of these women is Dahlia. Eckhardt has an irrepressible need to solve the Dahlia murder, and Hartnett an overwhelming desire to ignore it. Both feel that the murder, and the hysteria which followed, are keeping them from their jobs of protecting the streets. The lifeless presence of a woman decimates priorities. For Eckhardt, who spent his career trying to keep Kay’s old pimp off her back and repressing the memory of a dead sister he couldn’t protect, Dahlia is a crucible. If Eckhardt can rescue Dahlia posthumously, he can exorcize himself of the burden of womankind. But of course he can’t. He’s too deeply poisoned by the world of woman to conquer it.

There is something of Macbeth in the story. In the end it takes a Macduff not born of woman (or later tainted by them) to bring order back to the kingdom. Hartnett, it is made clear, lives with his father and has no real connection to women. He may have lusts, but when he acts on them—with a weekend-lesbian heiress played by Hillary Swank—he is not yielding to a woman, he is reasserting the primacy of his heterosexual norm over her disobedient sexuality. Besides, eventually Hartnett shoots her dead. Likewise, when Hartnett takes up with Kay after the death of his partner, he’s suppressing her independence, thus preventing her from becoming a threat to the social and sexual status quo. He makes clear he owes Kay nothing, but she keeps making him dinner. She pretends his own darknesses (screwing lesbians, lusting after his partner, being at turns a coward and an idiot) don’t exist. He has killed the woman who would have used his secrets to control him, and turned the woman who will hide them into his domestic chattel.

Hartnett, though he can’t act, is a natural choice for the MacDuff role. Time and again, he is picked for slightly deficient tough guy roles. He has traditional “rugged good looks” but he hasn’t quite grown into them, and so is always awkward on camera. Here, in the mess of Black Dahlia, playing a character whose only strength is his lack of attachment, the quality is useful. Throughout the film, one or another character thinks that the joke’s on Hartnett: that he’s a punch drunk boxer cop who remains a step behind the conspiracy. When Hartnett finally puts the pieces together, he still can’t suss it out. It’s all over his head. So he shoots the woman who has the answers, which in the end, are as subversive as the murder itself. Dahlia is forgotten, and in one closing shot Hartnett finally holds the camera, solidly sure that another dead broad is no thing to fuss over in the world of men.

As human beings, we collectively have acknowledged that our species was given the gift of higher consciousness, a far greater ambition than the kingdoms of the animals, vegetation, and everything else that exists in our natural world (including our ability to invent machines that would replace our hand labor, even our ways of thinking, which we now can legitimately refer to as our artificial world).