Andy Warhol’s fear of death as “the most embarrassing thing that can happen to you,” appears to be unfounded in the wake of Ric Burns’ operatic four-hour film. Andy Warhol: A Documentary which opened theatrically at Film Forum and aired September 20th and 21st on PBS as part of the “American Masters Series,” is the anti kiss-and-tell portrait of an icon. In the mode of Burns’ previous documentary work, the film presents a collage of ideas, images and sound bites that urge the viewer towards the acceptance of the film itself as the definitive authority on its subject. Warhol is presented as the ultimate cultural barometer—a visionary artist who shaped our sensibilities and popular culture to such a profound degree that we remain unable to recognize the impact that Warhol’s art and life exert on our cultural landscape. 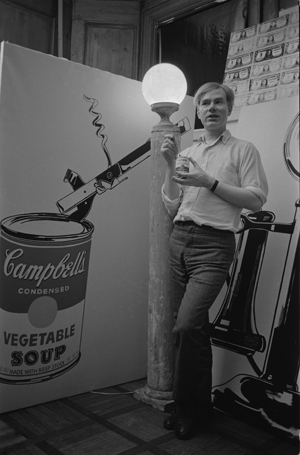 Dramatically culminating in Warhol’s 1968 near-fatal shooting, the film shies away from Warhol’s collaboration with 1980s artists, or his mutable importance to contemporary art, opting instead for a portrait of the artist as an insouciant enigma, knowable only through a recognition of his genius. However, understood within the context of Warhol’s oeuvre, the film’s foreshortened narrative is not a miscalculation on the part of the filmmaker, but instead a demonstration of the ground Warhol broke in the 1960s. Throughout the 1970s and ’80s Warhol energetically copied himself, essentially doing a “Warhol” when he silk screened famous faces or schmoozed with the jet set; activities that he had thrown himself into in the 1960s as a radical union of art and life now became the air the artist breathed and shared with us.

Critical analysis has never resembled a cheerleading squad quite so distinctly as in Burns’ film. The word “genius” is poured over the specter of Warhol, brushing aside questions that address the possibility of radical change in contemporary art, as well as Warhol’s loaded significance for artists and critics functioning in the art world that he handed down to them.

The film is held together by several persuasive themes that are skillfully articulated by extended clips from Warhol’s films, readings from his diaries and on-point critical analysis from Dave Hickey, Wayne Koestenbaum and Stephen Koch. Warhol as the consummate “American Artist,” the consumer-creator who spun the detritus of our mass media into gold; Warhol as psychoanalytic case study; and finally Saint Warhol, the artist who transcended the rarefied art world and provided us with a gripping hagiography for future generations.

The film brings to life Warhol’s childhood amalgamation of 1940s Hollywood culture with his mother’s quirky Eastern European crafts and religious faith. Julia Warhola’s devotion to and pride in her artistic son is restated throughout the film with a seriousness of purpose that belies sentimentality. Warhol’s mother’s warning that he will “end up dead in the gutter” if he goes to New York, coalesces the storybook, rags-to-riches narrative. Dave Hickey focuses on the maternal reinforcement of Warhol’s early art-making, describing Julia’s “secret kitchen workshop” as more important to her son’s burgeoning vision than a critical understanding of Duchamp, Warhol’s obvious artistic predecessor.

The basic premise that Warhol was first and foremost an artist from his earliest childhood into his graphic design career, allows us to understand a thread of continuity in Warhol’s methodology. As a student in the late 1940s Warhol used the “blotted line technique,” a method of ink drawing and painting that resembled mass-produced printed graphics. Curator Donna De Salvo links the popularity of this style to the fact that the images looked like they were both hand-made and mechanically reproduced—a duality that Warhol experimented with for the rest of his life. Equally important to his visual breakthrough was his unceasing emotional and conceptual hungering for fame.

Warhol’s sublime art of appropriation and his “non-artist” sensibility are deftly conveyed by tracing the birth of the Campbell Soup Can paintings. After a series of unsuccessful riffs on comic art, one of Warhol’s friends suggested a soup can (“something you see everyday”) as an appropriately banal subject, prompting Warhol to experiment with methods of depicting the cans. This is the textbook example of how pop art was the first mass-produced conceptual art that transformed an “original idea” into an impersonal dream vision. The medium of film perhaps best elucidates the “newness” of this form of art-making, because pop art emerged from the first decade, which constructed its visual culture primarily from the moving images of film and television.

To lend tension to its narrative of a steady art world ascent, the film offers tantalizing details of Warhol’s personal life, such as his thwarted attempts to befriend Jasper Johns and Robert Rauschenberg, a replay of his obsessive desire to connect with Truman Capote in the mid 1950s. Without overtly psychoanalyzing Warhol, the film posits the theory that his art is a sublimation of a emotional response to life’s unquantifiable mysteries: sexuality, death, time and fame. Warhol is described as a confused and sad child the day JFK is assassinated (“I didn’t understand what was happening”) who translates his media-saturated experience of the horrific event into the obscurely tragic Jackie series.

In an interview from the 1960s, Ethel Skull, the first patron to commission a portrait from Warhol, recounts how she was prodded by the artist to ham it up in a Times Square photo booth, resulting in a faux film strip of her “acting” for the camera. The sensibility is cool, utterly “real” yet fabricated, and unconditionally modern. The episode describes how Warhol turned a normal person into a “famous” person, as he would in turn transform famous people into immense phantom deities. In a sense the early silk screens were a visual manifestation of the Factory, a space in which junkies, drag queens, and socialites, bourgeois society’s perennial outsiders, vied to be transfigured by Warhol’s fame.

In uncountable ways today’s art world lives in the aftershock of the seismic vision Warhol unleashed. The seamless union of mass celebrity culture and the elite world of art that we take for granted, had its origins in Warhol’s embodiment as a “living sculpture” of this idea. A close reading of Burns’ film allows the viewer to understand the contradictions that Warhol embodied as both a seemingly passive participant in his art as well as a mastermind of his own artistic legacy. By sending his dealer Irving Blum a “do-it yourself” roll of un-stretched Elvis silk screens, Warhol shares the blessing of authorship with another. A decade later, Warhol keeps his commissioned “portraits of society” a uniform size so that in the future they could be exhibited in an aesthetic totality at the Metropolitan Museum.

The delicate and shifting relationship of an art object’s intrinsic value to its capital value is revealed when Irving Blum, the first exhibitor of the Campbell Soup Can paintings, describes his initial transcendent experience of inhabiting the Ferus Gallery with the paintings. Blum describes how Warhol sold him the set of 32 paintings for $1,000—a surreal exchange perhaps rivaled only by the “buying” of Manhattan for the equivalent of twenty-four dollars. Blum’s estimation that today the set would be valued at 100 million, prompts him to declare, “in other words they’re invaluable,” stamping the art with an official seal of cultural significance. What Blum’s story describes is the initial moment of contemplating art that occurs in a space outside of capital, fame or history, and how that moment, through time, is transformed, and tamed by the gradual accretion of a capital value.

In the early 1960s, Warhol felt that he was riding the tidal wave of his culture in its unique moment in time: “There’s going to be a new movement and a new kind of person, and you could be that person. They always say that time changes things, but you actually have to change them yourself.” If a catharsis is possible after four hours in the mirrored funhouse of the 1960s, it would surely be found in the strangely soothing words of Andy Warhol. The unwavering energy and vision that Warhol possessed, at once childlike and horrific in its totalizing possibilities, can now be translated into a simple treatise to the future artist to work through time to make it your own.

On Wolfgang Tillmans: To look without fear

From 2018 to 2019, the Rail published a column titled “1 by 1,” edited by Thyrza Nichols Goodeve, featuring original writing on singular works of art. On the occasion of Wolfgang Tillmans’s retrospective at the Museum of Modern Art, To look without fear, we felt compelled to revive the section.

Death of a Theater

On the fortieth anniversary of the destruction of two legendary Broadway theaters, the Rail takes readers to the moment of demolition, spotlighting the activists who tried to stop it.