Ed.’s note: The following talk was delivered at the closing-night party for CBGB’s Gallery, on Saturday, September 30th. 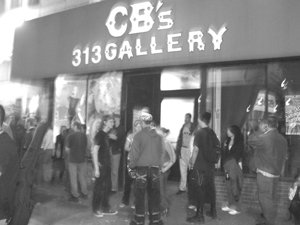 I want to honor this sacred hall of resistance by rallying the troops against the gentrifying herd turning NYC into a corporate theme park. But there are no troops to rally. And if there were troops, we’d have to attack ourselves. Because when you get past the hipster packaging, we’re just yuppies without the cash.

You think it matters to a Dominican which version of Whitey moves into the ’hood? Why should anybody fucking care that you can’t afford an apartment in the city? What have you done to make anyone give a shit that you lost your apartment to a stockbroker or your favorite cafe got replaced by a 7-11?

Hipsters are to gentrification what fluffers are to the porn biz: we get the area ready for the big pricks to come in and blow their load. We make everything cute and furry. Our communities, our culture, our country and our world is being exterminated and what’s been our response? We’ve run from the challenge and regressed into adolescence. Oh the joy of being around a 35-year old who acts more smug and sullen than my 12-year old cousin! Oh the joy of hanging out with a 34-year old who talks constantly about cartoons! Oh the wonder of pretending that the world doesn’t exist outside of our little kickball scene! Oh the fabulousness of sarcasm as we step over a homeless man on our way into the book launch party!

We are at the end of a cycle. We’re imitating people and things that happened 40 and 50 years ago. Hipster culture today is harmless culture. And that’s an epic tragedy because being hip used to mean that you were heroic and dangerous. That you waged war on soullessness and greed through art and resistance. That you were passionate and not afraid to show it. Being hip meant that you had dirty sex in dirty bathrooms and wanted upheaval in society. Being hip meant you were intense lower class, not detached upper class. Being hip meant being revolutionary.

But now hipsters have succumbed to the fear and apathy same as the rest of the country. Now we hide in safe and exclusive MFA programs, rather than staying on the outside and creating art that speaks to the disenfranchised streets. Now we wear t-shirts that indirectly mock and in a thrice-removed way comment on the gentrifying, SUV-driving, consumer capitalist yuppie pigs, rather than simply hitting the streets with a banner that says: Go Fuck Yourselves You Sold Out Scum!! Get Out Of Our Neighborhoods You Make Everything Boring and Ugly!!

I question what economic class the subculture comes from these days…Because the first thing you learn in the lower class is that if you don’t stand up and fight, then you get beat down and shut out. That if you choose smug bullshit over passion and sincerity, you get slapped and pushed around. That if you choose trivial abstractions over serious thought and action, then you get marginalized and railroaded. Fantasize and identify more with cool magazines and the elitist art world than you do the evicted and dispossessed, then you yourself will be evicted and dispossessed. Fail to stand up and defend those things that are important to you, then those things get co-opted and destroyed.

Look at tonight. This isn’t a metaphor. You don’t have to draw inferences or study media ecology to see what’s going down. This is the death of hallowed ground. I got off the Greyhound bus from Albuquerque in ‘88, walked straight here from Port Authority with my taped-up suitcase, scored a hit of acid and sat right there on the sidewalk tripping for four hours before a shitfaced sculptor from the Rivington School said I could come to their party and crash on their floor. This is where Richard Hell and Joey Ramone took on The Man. The punk rock values that came out of CBGB’s made me who I am. And now it’s gone. One more chunk of our lives handed over to bourgeois jerks who think rebellion is doing a line of blow in the bathroom on a Friday night.

They say the ’60s exploded because the draft directly affected its youth. Doesn’t losing our living spaces, our jobs, our venues, our communities, our culture and our identity directly affect us? Doesn’t unjust war directly affect us? Doesn’t the pain of living in a plastic country of lies and hypocrisy directly affect us? What are we clinging on to? Was it your dream to be a temp worker in the Financial District, taking the train in from Edison, New Jersey every day because that’s the closest you can afford? Was it your goal in life to collapse on the couch and watch TV every night because the day kicks your ass so hard? Was this how you envisioned your adult life? Did you ever think that you’d be here at the closing of CBGB’s? What’s it going to take for us to mobilize? What’s it going to take for us to engage? And I’m not talking about endless meetings, boring collectives and lameass political correctness—because that kind of uptight political activism has reached its end as well.


Where Did Our Lust Go?