In the final story of Charles Yu’s collection of short stories entitled Third Class Superhero, the narrator laments that “Someone has beaten me to the punch and I am left to find another way to tell the story…” Yu has clearly succeeded in finding new ways in this debut collection. By playing with form and genre, from Sci-Fi to soap opera, old themes are rendered newly relevant by a voice that is as original as it is hilarious. 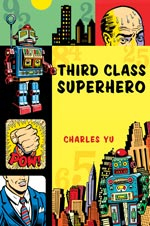 Several of the stories in the collection deal with an assortment of disillusioned, alienated underachievers approaching mid-life. They are struggling to come to terms with who they are versus what they have become. They’ve reached a point where “Things go fast. The decades, they get away from you… Mistakes count permanently.” They wrestle with “A swirl of yearnings” fed by an endless barrage from the consumer driven, media crazed culture they live in, and an internal sense that there has to be something more to life than “Leather, Safety and Comfort Starting at Under $32,000.”

Realism is the most revealing story in terms of the principles Yu plays with in crafting his pieces. The narrator is attempting, as in the final story, to write his mother’s biography. “I want to have an epiphany,” she tells her son. He responds “there is no such thing…those are made-up features of realism. Illusory. Like time, like meaning.” She presses him to include details and expresses frustration with his abstractions. To this he responds, “Your life is not what you did, what you said or wore or ate or drank or noticed out of the corner of your eye… I have to find the essence… I have to keep this general.” Yu does this by restraining details, stripping language to the point of being technical, even scientific, or as in 401(k), a meaningless string of sound bites. Proper names are frequently dispensed with in favor of “Man,” “Woman,” “A,” “B,” and “Pretty Girl in Import Beer Commercial,” to name a few. Time does not always flow evenly and events do not necessarily follow a logical order. His characters are iconic. Yet despite, or as Yu might argue, because these precepts of realism are repeatedly broken, the stories that emerge are both idiosyncratic and familiar.

Yu writes about issues of identity and true self, as in The Man Who Became Himself (an interesting nod to Kafka’s The Metamorphosis) and My Last Days As Me (about an actor who plays himself on an episodic television show). There are themes of loneliness and cosmic musings about time and distance as in Florence, which is set in the future when the human population has been spread out one person to a planet. The Man of Quiet Desperation…”wants so bad to just stop running from place to place to place, never any beginnings, never any endings…” He is stuck in a story with only middles, “trapped in the static present, the desperate moment of right now, and right now, and right now.”

The title story, Third Class Superhero, is the tale of an almost forty wannabe who year after year applies and is rejected for superhero status. The best he can manage is a good guy card. At one point, suffering the humiliation of yet another test in an overheated, overcrowded exam room at a local high school, he looks around at his peers. “Burnouts, all of them.” Each thinking, “I’m the diamond in the rough,” the one the world has underestimated, the “late bloomer.” Straddled with a moniker and a power not the least likely to strike fear in the heart of bad guys, the hero is faced with a moral quandary. It is a tale of the good, the bad, and most of all—the mediocre.

This is a point Yu keeps returning to, the notion that most of us are not born superheroes. We are ordinary by its very definition, born with ordinary talents, and ordinary souls, and for the most part, we live ordinary lives. Yet our contemporary culture chides us to want more, be more, consume more, and in this pursuit we’re transformed into the quietly desperate who can’t stop running. Yu sifts through his characters’ lives for “the missing middle…the secret at the center” in what he knows to be a futile attempt to uncover some extraordinary essence that ties it together and makes sense of it all. In the end, what he succeeds in doing, is to rescue his third class superheroes, not from their ordinariness, but rather from their anonymity.

The Story of No One From Sri Lanka

Sri Lanka is just an island of 21 million people, still colonized by capital, still culturally self-colonized, and thus our sufferings are not unique. We are all ultimately just leaves in the stream, and right now the water is churning.