Carnage in Iraq, high water in New Orleans: the twin disasters of George W. Bush’s second term. Both remind us of the perils of bureaucratic incompetence, of a laissez-faire attitude towards earth-shaking events, and of governance without foresight. We’ll ponder how these catastrophes could have been prevented, or at least mitigated, for decades (and other presidential administrations) to come, but for now, we might settle for a simple answer to both problems in Robert W. Fuller’s All Rise: Somebodies, Nobodies, and the Politics of Dignity. The book is not about either event, although it does mention each briefly. Yet Fuller’s argument—that the next step in realizing a true democracy is to focus on the dignity of each person—should have reverberated around the White House during its decisive meetings. While Fuller, a former president of Oberlin College, refuses to direct his argument towards partisan ends, he illuminates how the abuse of power and rank is rampant in American society, compromising the country’s ideals. By channeling our energies into promoting individual dignity, Fuller believes, we will promote a truly equal society, and improve our personal, political, economic, and even our environmental well-being in the process. “By protecting the dignity of others as if it were our own,” he writes, “we not only give them their due but simultaneously protect ourselves by preempting the desire for retaliation.” Sage advice, and timely. 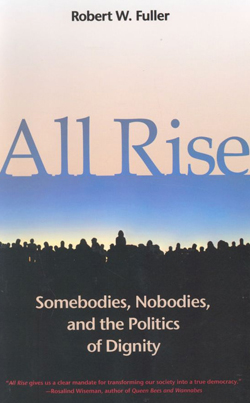 Now, reduce Fuller’s idea to its most elemental premise—that each person deserves respect and acknowledgment—and you might dismiss this entire project as an exercise in either the redundant or the naive. Fuller knows this: He readily admits that we’ve had the Golden Rule for two thousand years. But as he elaborates on it, it’s clear that he’s on to something a little more complex and far more interesting. The simplicity of his project is its greatest virtue, as it provides a handy key to unlocking many problems: sexism, racism, ageism, and all the other narrow prejudices railed against in isolation by special interest groups are really different facets of the same fundamental disorder. And to these we must add the seemingly more trivial harm when the abuse of rank and hierarchy creeps into areas like the hospital, the lecture hall, or the corporate boardroom, where authorities who refuse to listen to their “inferiors” might contribute to a stagnating educational system, a policy that exploits workers, or the death of a patient.

To achieve what he calls a “dignitarian” society, Fuller advocates “model building”—the construction of hypotheses which can be tested by observation—a technique ordinarily associated with science. Fuller holds that such models should be entertained in political and social contexts as well. We create elaborate intellectual schemes and allow them to engage with the ideas of others. Whether these ideas collide with or complement one another, a unified concept, strengthened by testing, advances, and each of us acquires a more profound sense of reality and more respect for each other. And instead of attacking one another personally, our ideas rise and fall based on their own merits. As Fuller puts it, “The idea of partial, ever-evolving truth is a keystone of dignitarian culture.”

Had Donald Rumsfeld, for instance, entertained the counter-models to his doctrine of a small, fleet force, Iraq might well be under control and free from the decimating attacks of terrorists. The initial prognostications—from people who actually had battlefield expertise—were for an occupying force of more than 300,000. Instead, the Secretary of Defense held to his own pet ideas, and we’ve all been living with the fallout. (This includes the president, whose refusal to countenance recommendations of Rumsfeld’s removal is another instance of rankism. “I’m the decider,” he’s reminded us). Ideas don’t evolve here, they just stagnate. And this attitude works at a collective level as well: the United States’ refusal to sign on to environmental treaties because they might burden American consumers and businesses is a clear case of one nation assuming greater license than others, especially given that Americans are vacuuming up more of the earth’s resources than others.

So how to remodel our culture? Start with yourself, Fuller recommends, and this is where All Rise takes a strange turn. He retreats—retreats far, in fact—from talk of bureaucracy, economic dependency and even simple prejudice, moving into the nebulous world of identity, the ego, and the soul. He invites us to view personality as a changing aggregate of ideas and models. So, instead of each of us existing as a solitary, powerful ego, we are mute witnesses to a fluid construct called “I,” a series of successive personalities. “Each of these evanescent selves,” Fuller writes, “deserves to be received, well treated, and when the time comes, bid farewell with dignity.”

As with his reframing of the Golden Rule, Fuller’s argument here isn’t new. It is familiar to anyone who has read Buddha or Plato or Heraclitus or Emerson. But Fuller makes it clear that he himself has realized this transformation personally, first with a high-school “epiphany,” then with what seems to have the earmarks of a minor midlife crisis. First, he says, “one day, standing alone in my bedroom, it struck me that beliefs of every sort were fallible, and by the same token, subject to improvement. And that meant it was impossible to demonstrate beyond doubt that anything was true, once and for all.” Then, in his late thirties, after what he describes as a “burnout,” “I had accumulated enough personal history to see that over time I had indeed presented several rather different ‘selves’ to the world. Like the … science models I had studied in school, I now saw that my identity, too, had undergone periodic metamorphoses…. I’d been a nobody, a somebody, and then a nobody again, with no end in sight to the cycle.”

We could perhaps wish for more specific details of the “burnout,” the sources of this personality crisis, but must be grateful to Fuller for bringing his argument down to the personal level at all. It lends his book authenticity, and keeps it from seeming merely pedantic. And where some might dismiss a high-school profundity as just another earnest teenage daydream, Fuller is willing to acknowledge it as a critical step in his personal development—at least one part of an old personality worth keeping.

It remains for Fuller to expand on his subject, and discuss at greater length concepts touched on in this primer. He briefly mentions the problems presented by religious fundamentalism, for instance, but can’t quite dispatch them altogether. Creationism, after all, is a model that has persisted for thousands of years and continues to thrive without having any factual basis. How do you press the validity of observation on people who steadfastly refuse to acknowledge the claims of science?

So the debate continues. But Fuller’s way suggests that we protect the dignity even of our enemies. Who knows? By avoiding the violent partisanship these debates encourage, by according intellectual opponents respect, and by focusing dispassionately on the argument itself, we might encourage the most radical of all outcomes: truth.

Water Out of Nowhere:
Technological Solutions to a Legal Failure on Salt River Reservation, 1910 – 1939

In a modern impulse to perfect nature and make it as productive as possible, either through spiritual or conservationist principles whose mandates dovetailed nicely, the settler population changed the environment of the area forever and severely limited indigenous water supplies in the process.

Jeffrey Perkins’s George is an important new addition to the twin canons of art and anti-art.

Smoke and Water, ideology and viewer

A reimagined signification of ash swirling in water broadly reveals the hegemony of the coal industry and the way that its power serves the pursuit of capital through the dispossession of land, water, clean air, health, property value, and financial stability from surrounding communities.