Alice Notley’s newest collection of poems, Alma, or The Dead Women, is a pure expression of rage and grief. It is a direct response to the rise of international violence following the events of September 11, but it does more than mourn the deaths of soldiers and citizens—it defines the Iraq war as the product of an inherently violent, phallocentric culture. Notley directly links the tragedies and blunders of current global politics with male dominance, and grieves for women who have, throughout history, been helplessly drawn into misery by their male counterparts. Invoking the Greek story of a young child slain by her father during war as an offering to the gods, Notley cries: “the sacrifice on the altar, everywhere, is still Iphigenia.” Now residing permanently in Paris, Alice Notley is a poet of the New York School and author of more than twenty collections of poetry, including the acclaimed Descent of Allette. Her writing reflects the creative intellect of a woman surrounded by poetic minds, a woman whose husband and children are writers themselves, a woman whose personal experience is inseparable from her work. Notley’s poetry links aesthetic, political, and intimate life, blurring the lines between waking and dreaming, drawing all knowledge and all experience together seamlessly. Her primary concern, however, is not the fusion of political and confessional poetry. She instead focuses her efforts on a battle to advance female voice in literature, to grapple with the Western male canon and undermine it by appropriating and deconstructing its established forms. In her most notable and most breathtaking piece, Descent of Allette, Notley seizes upon the male epic tradition. She draws from the Sumerian myth of Inanna’s descent, among others, and re-imagines the epic form by casting a female as the titular warrior-hero on a quest to locate and confront a male enemy. Allette resists the male voice. Notley creates and employs her own grammar, her own narrative style and, most importantly, her own system of symbols unique to the book. She resists the male-oriented storytelling tradition, she rejects “the phallocentric symbolic order”; in so doing, Notley explores where other authors fear to tread. Laura Hinton suggests in “Centering Margins,” an essay on contemporary poetics, that estrangement from the masculine canon encourages female poets to break new ground in their works. “Women are ‘allies’ of the avant-garde,” she writes, “Indeed… women often find themselves most at home among its strange and stretched linguistic landscapes.” In this respect, Notley is one of the most daring, and has clearly become a powerful voice in creating a new literary establishment: the feminist canon. 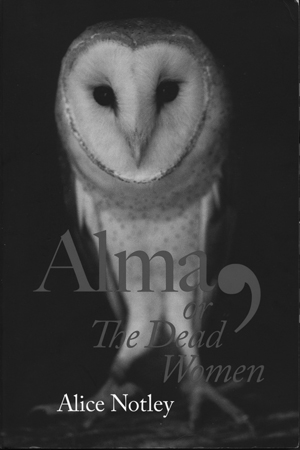 The subtle power of Notley’s voice, however, shown so strongly in Allette, fails to surface in her most recent book. As a whole, Alma seems suffocated by the intense sorrow and rage that initially inspired its creation. The collection centers around the grief-stricken spirit of Alma—a dead goddess, “thrashing in her death sleep offended”—whose furious voice magnetically attracts the voices of other dead women. Though her presence seems more than human, Alma identifies herself to the reader as an unremarkable woman who shoots heroin into her forehead as fuel for mournful visions, visions that leave her incapacitated, “moaning in [a] two story working class structure.” From Alma’s exhausted mind pours the rage of a being trapped not only by the violent constraints of her society, but by her own apoplectic anger. Far from being the thoughtful, adventurous Allette, Alma shrieks against what offends her from the first page of the book to the last, lying passive all the while. “WHO CAN HEAR / OVER THE OIL SLOP WAR,” she cries, “CHANCE THEY SAY / MADE WOMAN SLAVE.” Furthermore, Alma accepts the male/female binary without question, casting man as master and woman as slave, masculine as oppressor and feminine as oppressed. She simplistically perceives the complex power dynamics of gender as a dualistic struggle. When she asks: “is it fate that women have been in such a fix for thousands of years?” she answers herself: “no, men did that.” Alma accepts powerlessness, accepts victimhood, and doing so leads her to attribute all aspects of human progress, particularly the negative, to the flaws of maleness. She overlooks the flaws of her own passivity. She sees the physical world itself as a helpless object, oppressed by the male desire for dominance. “[T]he river has been selected its shape has been modified it has been dredged it has shrunk,” she mourns, “the sky has been selected it belongs to men who say what it is.” In perceiving man as tyrant, Alma resents the submissive roles into which, she believes, women have been forced; she grieves for a singer who cannot sing until embraced by a man; she grieves for a “hooker” whose “vagina [is] not part of her body,” who can take no action without instruction from her pimp. Alma grieves for those she thinks enslaved as she thinks herself to be; she hates for those who do not themselves hate. She upholds for women the male doctrine that she claims to loathe so much: “either you’re with us or you’re against us.”

Why does Alma’s rage seem so different from Allette’s? Perhaps the degree of rage has not changed, but the manner of its communication, unfortunately, has. Unlike Allette, Alma fails to rise from her grief, to actively seek out and face her opponents. Instead, she lies rigid with hatred of an unseen enemy, and incites other dead women to join her here. Throughout the collection, Alma’s voice emphasizes the other-ness of masculinity, underscoring her sense of enmity between male and female. Such polarization endangers productive discourse, regardless of context. Virginia Woolf warns against such polemics in her landmark essay A Room of One’s Own, arguing that female writers do themselves great disservice when they dwell on the socially-constructed gender binary. According to Woolf, female writers for whom “the human race is split up…into two parties,” with men standing as the “opposing faction,” produce work that is “harassed and distracted with hates and grievances.” Notley here struggles—her book is impeded by its complaints, and the pointed nature of her attacks leave the reader little room to analyze the more timeless, universal implications of her otherwise compelling verse. As Woolf writes, it is a “thousand pities that a woman who [can] write like that, whose mind [is] tuned to nature and reflection, should [be] forced to anger and bitterness.”

Notley’s Alma, however, cannot be dismissed by any means. Despite the force of her rage, her unique imagism produces symbolic visions of staggering beauty, and her helpless humanity often glows through her general anger. Yes, she grieves the oppression of women, yes, she grieves most deeply that “the sacrifice on the altar, everywhere, is still Iphigenia,” but her compassion for all living things occasionally surfaces in Alma’s final poems. In the end, the collection stiffly moves from the polemic form and hints of a more sensitive plea for compassion between enemies, both political and social. For all those who have died in these years of war, Alma cries: “why don’t you just grieve for them just stop and grieve as if they were anyone? why can’t you say they’re just anyone, a grasshopper, a hummingbird?” Indirectly, Notley awakens the reader’s compassion. For though her screams against male dominance continue well into the final chapters, those screams become tired, and other, lesser, cries take the foreground. Above all, Alma must be praised for uttering, quite simply, the few words that must be heard in this era of imperialistic violence: “STOP… PLEASE STOP.”

Johannes Göransson is the author of eight books, including Transgressive Circulation: Essays on Translation and POETRY AGAINST ALL, and the translator of several more, including Sense Violence by Helena Boberg. Together with Joyelle McSweeney he edits Action Books.