Only after cinema has freed itself from linear narrative can it do justice to the multifaceted, fluid and metacritical phenomenon we define as reality. Or so goes the premise of the alternately frustrating and fascinating book, Broken Screen: Expanding the Image, Breaking the Narrative: 26 Conversations with Doug Aitken. The interviewees who share their insights on the potential of nonlinear aesthetics include figures as diverse as Richard Prince and Rem Koolhaas, Gary Hill and Pipilotti Rist, Claire Denis and Alejandro Jodorowsky. While such an inspired list of participants might have been mined for interlacing veins of speculation and theory, no such connections are made. Instead, their conversations are arranged alphabetically (Eija-Liisa Ahtila to Robert Wilson), as if grouping them by generation or medium would have been too manipulative or deterministic. 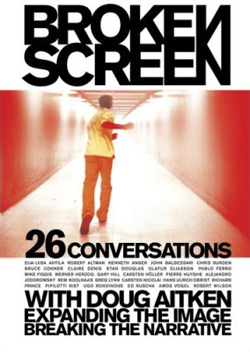 The only scheme that Aitken, an artist and filmmaker, imposes on his subject is found far in the back of the book, where a fancifully drawn “Diagram of Nonlinear Film” assigns various classic works into sectors designated as “Manipulation of Structure and Story Line” (Sherlock, Jr.; Persona; Zabriskie Point), “Structural Manipulation” (Cat’s Cradle; Breathless; Scorpio Rising), “Story Line Manipulation” (8 Â½; The Mirror; Lost Highway), “Broken Image” (Napoleon; Chelsea Girls; Media Burn), and “Immersion,” which includes architectural and multimedia works such as Kurt Schwitters’ Merzbau, Stan VanDerBeek’s Movie-Drome and Labyrinthe by Roman Kroiter.

Yet even a loose and overlapping framework like this helps to build correspondences among artists. Aitkin’s conversation with Eija-Liisa Ahtila, whose multi-screen installations utilize both time and space, would have been more illuminating if it were placed under the heading of “Immersion” with the likes of environmental artist Olafur Eliasson, for whom the location of the viewer’s body is essential to the experience of his work, and Rem Koolhaas, who cites Hitchcock’s montage as a peak influence on his approach to the sequencing of architectural space.

These quibbles aside, taken as a whole, the book is an up-to-the-minute meditation on the inherent tension between the implied truth of documented reality and the manipulation of that reality in pursuit of a more subtle, yet more suspect, concept of truth. And, if the ideas expressed in Broken Screen are any indication, cinema’s umbilical connection to the real world seems to have endowed its most self-aware and forward-thinking practitioners with a sense of accountability toward the streams of perception influencing every aspect of human behavior. Recognizing linear narrative as visibly simplistic, they disrupt it with free association, layer it with shifting panoramas of sound, and/or compound it with consciousness-saturating visuals.

The ongoing experiments of Jean-Luc Godard, especially such late, uncategorizable masterworks as Notre Musique and In Praise of Love, hover behind many of the aesthetic positions staked out in this book. But, in a certain respect, Aitken’s klatch of artists and theorists (to risk a generalization) are really the children of John Cage, who, rather than selecting, organizing and refining sounds for concertgoers to enjoy, played with chance happenings (and in the process elevated reality’s cruel randomness to a form of ecstasy) and strove to open listeners’ ears to the entire sonic world.

A movie like Timecode, written and directed by Mike Figgis, can be taken as a touchstone for the kind of liberated cinema envisioned by Aitken and his chat-mates: four separate stories, shot on video in real time, unfolding simultaneously on a four-part grid. The viewer, though nudged toward one quadrant or another by fluctuations in the audio, is nonetheless free to follow whichever storyline he or she prefers. While Figgis, originally a musician, states that he “actually structured the entire film on musical paper” and commentators have likened its interwoven narratives to a string quartet, the differences in how the brain processes aural and visual information would seem to set an outside limit on cinematic complexity.

A concert of Cage’s music, while shredding commonly held notions of rhythm or melody, can still be a visceral experience thanks to the abstract nature of sound and the physical effects of vibration on the human body. Visual overstimulation, however, is often too much to download, so to speak; as our intellects play catch-up, our emotions lag behind. Timecode is engaging to watch, but by the end feels chilly and flat. Even masterful editing and sound design (think Robert Altman) can become overly concerned with its own brilliance, to the detriment of character and story.

This is not to suggest that diverting from linear narrative is a dead end; as affirmed time and again by the contributors to this book, it is essential to the survival of the art form. “But,” as Werner Herzog tells Aitken, “the real question is how you wrestle meaning from film and meaning from life.” Our relationship with media is in constant flux, and to keep up with its increasingly fragmented discourse, artists invent formal correlatives that are perforce more disjointed and complex. Yet these innovations aren’t solutions in themselves, and they sometimes stand in the way of a more organic approach. As Amos Vogel, cofounder of the New York Film Festival and author of the landmark study Film as a Subversive Art, puts it, “I am constantly taken aback by the total misuse of the wonderful creative function that human beings possess to create new forms, new shapes and new ideas. There is a certain purity to expressing your own inner self, you know?”

Destination Out: Cinematic Illumination, More Than Cinema and Japanese Expanded Cinema and Intermedia

Cinematic Illumination, More Than Cinema and Japanese Expanded Cinema and Intermedia: Critical Texts of the 1960s enrich our understanding of the political and intellectual contexts for the disparate strands of the Japanese film avant-garde.

Every Situation Calls for Its Own Language: Gilberto Perez′s The Eloquent Screen

The process of identification is at the heart of Gilberto Perez’s posthumously published book The Eloquent Screen: A Rhetoric of Film. Perez writes that audiences identify with more than characters, “we identify with an action, a situation, an emotion, a motive, an interest, a point of view, something the character represents.”

Subterranean Cinema: A Return to the Geo-Imaginaries of the Hollow Earth

We are in desperate search of spaces that offer us greater degrees of darkness—be that the cinema or underground caverns or possibly the greater cosmos. These alter-territories hold the promise of maximum separation from the 7.5 billion other people on the planet. In gravitating toward sites of absence, specifically the mine, the cave, the hole, where cameras are insufficient tools of capture (if not rendered entirely useless), film artists have found overlapping themes that go beyond traditional ecological concerns of diminishing resources and compromised landscapes.