Throughout Susan Abulhawa’s timely, fact-based novel, The Scar of David, a profound question resonates: Why have the Palestinians been forced to pay for the Jewish holocaust?

The novel centers on the Abulheja family. Originally from Ein Hod, a small Arab village east of Haifa, it chronicles the lives of several generations of household members from the mid-1940s to the present.

The story opens as Jews fleeing the Holocaust begin to arrive in the region—where for more than 40 generations, Arab farmers have cultivated fruit trees and olive groves. Suspicions grow, but for a short while co-existence seems possible.

A new settler, an incredulous Jewish boy, first reports the worldwide campaign to create a Jewish state in what the Zionists call “a land without a people.” Most of Ein Hod’s villagers scoff at the warning, unable to fathom the evisceration of long-established communities. 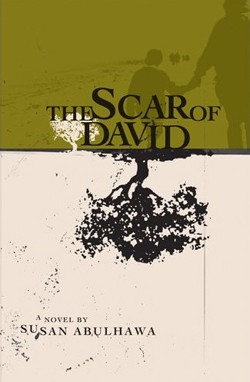 But the evisceration happens. Abulhawa’s descriptions of militant incursions into Ein Hod are riveting, and the novel vividly depicts the unprovoked attacks on Arab villages that compel families like the Abulhejas to relocate.

“Their march was a one-way trek, guns behind them, up and down unforgiving hills, the sun merciless,” Abulhawa writes. “The weak fell and died. Women miscarried and the dehydrated bodies of babies went limp in their mother’s arms. Jenin was as far as they could go… Jordan, Iraq and Syria gave out a few tents, where sprang a refugee camp, not far from the homes to which the villagers of Ein Hod could never return.”

Amal Abulheja is the vehicle through which we learn about the Palestinian settlement at Jenin and witness the development of a new community. Through Amal’s eyes we view the personal impact of Israeli atrocities and see how non-stop violence can presage depression, detachment, and murderous rage. We also see the resourcefulness of individuals as they attempt to accommodate repression, forging relationships, gossiping, and passing cultural history from one generation to the next.

As Amal comes of age, we see her mourn deaths and disappearances, cheer the creation of the PLO, revel in crushes and friendships, and get a full scholarship to an American college. Later, when Amal reunites with her childhood friends in Lebanon and meets her future spouse, it seems as if this tale can have a happy ending.

Sadly, political turmoil makes a mockery of personal pleasure.ââIndeed, shortly after her marriage, air strikes on the Sabra and Shatila refugee camps irrevocably alter Amal’s life. The violence is stunning, beyond anything previously experienced. “Israel’s stated aim was self-defense. To dislodge the PLO, a 6,000 member resistance. By August the results were: 17,500 civilians killed; 40,000 wounded; 400,000 homeless; and 100,000 without shelter,” Abulhawa writes. Her account draws on journalist Robert Fisk’s reporting and is harrowing, if heinously familiar.

Not surprisingly, the massacres deplete Amal. Back in the U.S., she gives birth surrounded by strangers. Shell-shocked, she rears her daughter in self-imposed isolation. In the end, it is a 2003 visit to Jenin, prompted by her daughter, which pokes holes in Amal’s armor. Still, a redemptive denouement is impossible, and the novel is unable to escape the tragedy that surrounds the region.

By asking pointed political questions, The Scar of David raises consciousness and gives us a family to root for. Illuminating and deeply moving, Abulhawa’s epic resonates with compassion, not only for Palestine, but for the millions who died in the Holocaust and terrorist attacks like September 11. You can’t ask more of historical fiction.

Before I consider a personal book, perhaps I should offer a personal story. My first substantive encounter with David Shields, following some long-distance business, was an interview for his 2017 selection of essays, Other People.

In the Field: Sharon Lockhart, James Benning, and People

In a conversation between filmmakers James Benning and and Sharon Lockhart after a screening of their films L. Cohen (2017) and Rudzienko (2014), Benning starts things off with a little joke. He sets it up. Two planets. The first planet says, “I have people,” and the second responds, “Don’t worry, that will pass.” The joke is over. The audience laughs. We can derive humor from the idea (the fact?) that the human race is a blight on any environment unfortunate enough to appear bountiful before us, but I suspect that Sharon Lockhart actually kind of likes people.

It takes a few turns around the gallery to ascertain the layers encoded in David Row’s crisp and brainy abstractions. His fractured canvases, plywood assemblages, and faux-assemblages, are puzzles that question the act of puzzling.