Since James Thomas’ Sudden Fiction anthology was launched in 1980, flash fiction has at least made guest appearances in established literary journals.Now, with the proliferation of online sites and printed journals such as Sentence and Quick Fiction, prose poetry and flash fiction work has fortunately inundated the desks of editors. Having dubbed this movement as PP/FF (prose poetry/flash fiction), Peter Conners (one of the founding co-editors of Double Room: A Journal of Prose Poetry and Flash Fiction) has compiled PP/FF: An Anthology, a collection of 61 of the most daring contemporary writers of this mixed genre. Included are established authors such as Brian Evenson, Gary Lutz, George Looney, Diane Williams, and Noah Eli Gordon, and younger up-and-comers such as Joanna Howard and Aimee Parkison. 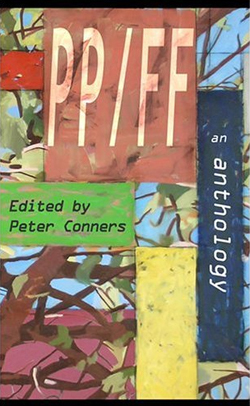 Amazingly, many of the writers in Conners’ anthology commit to a new level of strangeness. Ted Pelton opens “Kitchen on Fire” with this bizarre description:

The fire / the guitar / the kitchen / the cowboy hat

I was making an omelette in the kitchen. I was using

the guitar to break eggs.

Throughout the work, Pelton’s speaker resides in a dream-like state. After the kitchen mysteriously becomes torched, the speaker envisions a man with a banjo possibly before the fire, along with another man donning a cowboy hat and a yellow suit “sprinkled with large black musical notes” which could slip from their space and land in a pile capable of igniting. Next the kitchen hallucination conjures up a woman in a cowboy hat, and the fire is in her heart and her nerves. By piece’s end, we are not sure what exactly occurred in the kitchen, if anything. The whole story repeats and circles itself both in subject matter and language, and we are left with bizarre temporal definitions of the space around the narrator.

Common to many of the works in the collection, this surrealistic approach is invigorating. Christine Boyka Kluge’s “Falling Moon, Rising Stars” has an alien posing as an 18 year-old male who ties ribbons of his poetry in the trees and uses an eighty year-old, pregnant woman’s placenta to breed super beings to send back to his planet.

Critics argue that PP/FF merely depicts our fast-paced, web-surfing society, but almost every work here demands several readings to wholly grasp the meaning and complexity of language. Many of the pieces (such as Brian Evenson’s comparison—in “Story Bakers: A Report from the Field”—of Iowa’s writing workshop attendants to workers who feed short stories into machines to trim off all creativity) comment on the importance to write against the grain of current literature. Lydia Davis is one writer who has made a career out of this stance. Often associated with the “Language Poets,” Davis has fused prose poetry and flash fiction since the mid-1970s.

In PP/FF: An Anthology, Davis’ “The Mother” could very well symbolize (among other things) the contempt flash fiction has repeatedly encountered:

The girl wrote a story. “But how much better it would be if you wrote a novel,” said her

mother. The girl built a doll’s house. “But how much better if it were a real house,”

her mother said.The girl made a small pillow for her father. “But wouldn’t a quilt be

more practical,” said her mother. The girl dug a small hole in the garden. “But how

to sleep in it. “But how much better if you slept forever,” said her mother.

When Conners served as PP/FF guest editor for American Book Review in 2005, he ended his introduction to the issue by stating:“PP/FF is a urinal that I invite you to hang on your wall. You can piss on it if you like, but perhaps you will find some aesthetic value in it as well.”

Readers will not yawn through PP/FF: An Anthology, and they will definitely find much of aesthetic value. In Conners’ collection, many outstanding writers are attempting to place this mixed genre in the foreground of American arts and letters, where it rightfully belongs.

DOUG MARTIN is a contributing writer for the Brooklyn Rail.

This volume collects the most representative pages of the performance artist’s diaries from 1965–83, which allow us to intimately approach her thoughts during these seminal years.

In his eulogy for Robert Motherwell the English critic Bryan Robertson remarked, “No other artist in this century could have been quite so much in love with literature, and, above all, poetry.”

Cindy Juyoung Ok teaches university and nonprofit creative writing and translates Korean poetry. A MacDowell Fellow, she has published poems in journals like the Nation, Poetry, and the Massachusetts Review, and a chapbook, House Work, is forthcoming in March from Ugly Duckling Presse.