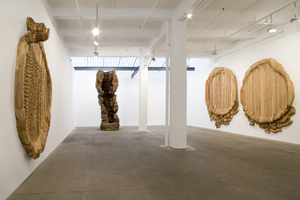 Ursula von Rydingsvard’s commanding new sculptures in natural, rough-hewn cedar are captivating in their correspondences to and departures from the awe-inspiring and warmly welcoming works that have defined her thirty-year oeuvre. Upon entering the exhibition, entitled Sylwetka (‘silhouette’ in Polish), one’s eye is drawn deep into the sky lit back of the space toward a lofty, 13-foot, cave-like sculpture with undulating, rhythmic surfaces darkened by graphite. Making one’s way toward “Wall Pocket” (2003-04)—pulled as if by some ineffable, spiritual force inhabiting its internal cavity—another work occupying the wall close to the entrance seizes attention. Set against and literally incorporating the white expanse of wall it occupies, “Large Ring” (2005-06), along with several other sculptures in the show, marks the first time that von Rydingsvard has installed her works directly on the wall and refrained from adding graphite to the natural wood. In a process transparent to the viewer, long strips of cedar have been curved, bent, layered and glued to form a circle of spiraling, concentric rings that encloses the white space of the wall plane. As much drawing as it is sculpture, “Large Ring” is open to diverse readings, among them the growth rings of a tree or the incised frame for a mirror whose mute surface reflects the thoughts of passersby.

Born in Germany in 1942 to a Polish mother and a Ukrainian father, von Rydingsvard spent her childhood in labor camps for dislocated persons before moving to Connecticut with her family at the age of eight. Much of her work over the course of her career has drawn on memories, objects and rituals from her past. The carved balls on the 10-foot-high “Plate with Dots” (2006), as well as “Spreading Blue” (2006) and “Dubeltowa (Double)” (2006), for instance, have their roots in the knitted “popcorn” stitches von Rydingsvard remembers fondly on a treasured childhood sweater. “Plate with Dots” and the diptych, “Weeping Plates” (2005-06), are key works on opposite walls of the main gallery that exemplify and expand upon von Rydingsvard’s ongoing interest in functional, domestic objects as metaphorical jumping-off points for sculptures that are largely abstract. Her so-called plates, tables, combs and vessels reverberate on literal, formal, geological, architectural, organic, spiritual and mythic levels. A plate, universally used for eating, is amplified—literally and figuratively—in von Rydingsvard’s sculptural language to invoke all that sustains and nourishes life. The balls have a playful, decorative quality but also a dark side, as evidenced by the tumor-like bulge in “Plate with Dots” that swells out from the plate and onto the wall. Carved by hand, these protuberances covering the surfaces of von Rydingsvard’s new sculptures produce a sense of languid movement and transformation suggesting an array of associations ranging from folk art to geological formations to digital pixilation.

Approaching the towering, primeval-looking “Wall Pocket,” one is slightly wary of its forbidding presence while enticed to take shelter within its dark, inviting recesses. Like a pilgrim arriving at an architectural ruin or sacred shrine, one feels strangely at peace in the shadow of its enveloping majesty, moving up close to examine the placement, rhythm, and patina of layered cedar blocks and stepping back to take in the overall, constantly shifting surface and contours. From the side, a vague impression of a woman’s profile emerges against the white ground of the gallery walls and, suddenly, one comprehends the source of the sculpture’s nurturing spirit.

Von Rydingsvard is a master of context, be it the pristine white walls of a Chelsea gallery or an outdoor, public space. At Madison Square Park, on view at the same time as the exhibition, she has created a colossal sculpture in transparent resin, which captures and emanates light. The sculpture incorporates the relationship between daily and seasonal light phenomena as it filters across the lawns, trees, and surrounding architecture of the park, accentuating an awareness of the enchantment of one’s surroundings.

Lofty yet down-to-earth, narrative yet abstract, von Rydingsvard’s ambitious sculptures are in concert with the humble materials from which they spring and the spaces they occupy. Through the sculptures’ fissured surfaces and organic forms, von Rydingsvard releases an energy latent in nature, in art and in the body for viewers to tap into and experience firsthand.

Susan Harris is co-president of the Board of the International Association of Art Critics, United States section (AICA-USA). She is an independent scholar and curator. Her most recent project is Managing Editor, Unfinished Memories: 30 Years of Exit Art, Steidl, 2016.