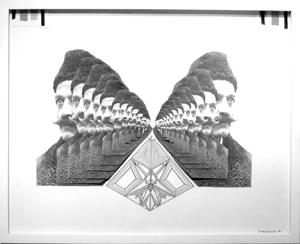 This young artist’s first solo show immerses itself into the aura surrounding G.I. Gurdjieff, a Russian mystic who achieved a cult-like following in Europe in the 1920s. This obscure figure makes a fascinating subject, particularly since his devotees included some of the most notable literary expatriates of the day, among them Jane Heap and Margaret Anderson, founders and co-editors of the Little Review, and the celebrated writer Katherine Mansfield.

There are a number of portraits of Gurdjieff and his circle, drawn in pencil or ink or tooled into thin aluminum sheets, in a striated and heavily patterned style. But rather than settle for the common conception of an exhibition as a collection of discrete objects, Hull fashions it as an extensive environment, applying collaged constructions of photographs, drawings and tape directly to the walls. Sculptures doubling as prayer altars and planters sit on the floor, and the smell of anise (from essential oil on a hot light bulb inside one sculpture) permeates the room, as does a slightly distorted audio track of the artist playing an organ score composed by Gurdjieff. Other small discoveries, including tiny fetishistic constructions and modest printed materials free for the taking, are peppered throughout the show.

Hull’s all-inclusive approach is reminiscent of the modernist quest for a Gesamtkunstwerk, or total work of art, while evoking the avant-garde movements of the twenties, from Russian Constructivism to Dada, with his fondness for monochromatic geometric forms, collage and photomontage.

Some of Gurdjieff’s teachings are transcribed into works bearing such statements as “He must first AWAKE” and “Life is real only then when I am.” The text in these dense drawings is difficult to read, and their illegibility appropriately reflects the elliptical nature of their meaning. Gurdjieff’s actual philosophy was just one aspect of his mystique, and Hull conjures up a fittingly fantastical, hybrid spirituality of pyramids, prayer rugs, mystical numbers and hex signs.

The press release insists that the exhibition is intended neither to praise nor condemn Gurdjieff. But one can sense from Hull’s larding on of exotic adornments that he is approaching his subject with a healthy dose of skepticism. One cannot help but note that the anxiety and uncertainty of wartime Europe, which led to the embrace of the supernatural by otherwise highly intelligent people, resonates in contemporary pursuits of New Agey, water-downed versions of spiritualism—from yoga and hot stone spa treatments to Kabbalah bracelets—to ameliorate or own sense of dread and panic.

Can medieval art find a niche in the contemporary art world? Gothic Spirit: Medieval Art from Europe organized by London dealer Sam Fogg and now on view at Luhring Augustine embraces this question.

Artist-endowed foundations (“AEFs”) are increasing in number due to the convergence of three factors—demographic trends in the artist population, the continuing rise in the global art market, and artists’ desires to provide for their creative works and philanthropic interests in the long-term.