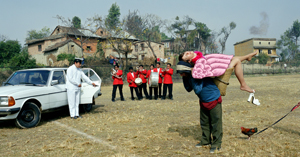 In the hands of an artist like Stuart Hawkins, photography sings with a global voice. The New York/Nepal-based artist has taken a Technicolor look at the uneasy relationship between foreigner and native—a binary reality at the core of identity politics, but one that is increasingly about imagined narratives rather than facts. Hawkins’ latest show confronts those fictions and manipulates them in a sublimely entertaining way.

Her second show at Feuer, Customs, includes a 22-minute DVD entitled “Souvenir” (2006) that attempts a futile search for “authentic natives” and a forgettable sculpture entitled “‘Oriental’ Rug” (2006). But the meat of the show is a series of photos saturated with highly charged narratives and symbols.

In Hawkins’ epic “Day Driver” (2006), the artist, wearing stylized angelic wings while dangling a white platform shoe from her right foot, is carted away on the back of a porter. On the opposite side of the photo, a chauffeur (or kidnapper?) in a dazzlingly white uniform opens the back door of a white sedan. In between these two discordant elements a red-jacketed brass band plays as spectators watch from distant houses. In the right-hand corner, a leashed rooster completes the scene. Pregnant with elusive meaning, the tableau is fresh, vibrant and good-natured, yet the scene is virtually hermetic. Its symbolism shares a common vocabulary with dissident Soviet art, a silent rebellion of absurd actions and pregnant metaphors.

The artist enlisted Nepalese people to stage and shoot all the photos in the show. Chance plays a part as passersby make unplanned appearances in the images; everything and nothing seems random simultaneously.

“Handiwipe” (2006) is a difficult, textured and stunning image bearing a virtually indecipherable narrative. The artist, on the lower left, dries her hands on a Handiwipe in front of an artificially blue pond while glancing at a man dressed as a tiered wedding cake in the upper right. Three pairs of pants dangling over a wall, three men applauding, and a couple of barely interested bystanders heighten the odd tension in the work. The photo confounds verbalization but it is unquestionably enchanting.

In “Welcome Drink” (2006), the artist spoofs the colonial image of a dark-skinned man serving a white woman a cold drink. Hawkins is bent over, buttocks facing the viewer, while the waiter looms over her, his face cloaked in shadow. Formally, the two bodies are abstracted into a rigorously symmetrical image of delicate stripes and cool whites, as a far-off airplane glimpsed above the waiter’s head completes the photograph’s uncompromising verticality. This image is reminiscent of Hawkins’ older work, in which she displayed a knack for capturing moments that transformed her subjects into something altogether mysterious. In “Welcome Drink,” she has retained her formalist taste but injects the image with racial, economic and sexual provocations.

Hawkins’ pictures cherry pick from global and local visual lexicons to marry disparate cultural traditions. Explaining her work is difficult, since it refuses to settle into easily communicable categories.

Her “Disposable Camera” (2006) is the most beguiling of her works. The scene is arranged in a manner that seems more imagined than real. The artist stands front and center, holding up the camera to take her own picture before an idyllic landscape, complete with an elephant and rainbow, painted on a drooping backdrop. Meanwhile, a boy pokes his head through a torn gap in the backdrop and a group of men look on from behind a metal railing high above. A dog pawing the dirt in the middle foreground seems to mimic the stalking elephant in the painted scenery. The artist seems to be inviting us to look through the viewfinder as collaborators in capturing an irreproducible moment. This image, like all the work in the show, feels ephemeral yet tense.

That said, I also want to question the gallery and catalogue write-ups suggesting that her work directly approaches questions of cultural imperialism. I think it is dated to suggest that the juncture between Nepal and the West is a one-way street, and Hawkins’ work is too sophisticated to be reduced to a manifesto. But dogmatic arguments aside, Customs projects a fascinating body of work that makes me think that globalization might lend artists as talented as Hawkins a rich new vocabulary to help us understand the silent transformations changing our lives every day.