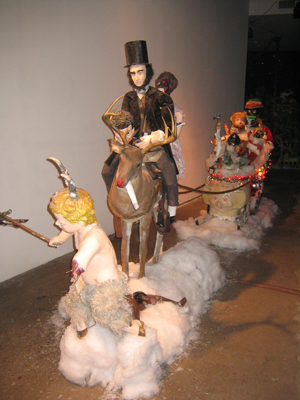 Peter Caine, “Rudolph and Friends” (2006). Installation at Jack the Pelican Presents. Courtesy of the gallery.

Time was there were things that one just didn’t discuss in polite company: bodily functions, religion, and politics. Culture, at large, was supposed to filter out the grosser elements of life, but now we brandish our expertise in the latest and greatest outrages with pride. Aw shucks, doesn’t the obscene shock and awe us any more?

With this, his fifth New York solo show of animated sculpture, Peter Caine welcomes us into the new millennium. In his “George Washington Crossing the Delaware” (2006), a rollicking Marquis de Sade, with a face like a pile of gravel, straddles the bow of a battered rowboat beside an economy-sized jar of Vaseline and a Bible open to Deuteronomy 23:24. Britches undone, his erect penis spews an endless flow of simulated semen, while a silver-faced George Washington dangles Barbara Bush’s decapitated head over the frothing fountain, “I don’t know if I can fit that in my mouth. That’s naughty, so naughty, lip-smacking naughty,” squeaks Caine’s voice in his best First Lady imitation on an endless tape loop. Behind them, an aroused Honest Abe in blackface flails a Confederate flag over the portside gunwale. Other crewmembers on this macabre boating party are Dorothy from the “Wizard of Oz,” her head a cluster of flashing, gyrating gadgets, the axe-wielding Tin Woodsman, and Prince Whipple covered in a skin of Wheat Chex.

After “Crossing the Delaware,” we pass through “Cabana Boys,” a grove of tall, irregularly cylindrical columns that mock Giacometti and Brancusi by twisting and jutting like fabric-covered hoochie-coochie dancers. In “Rudolph and Friends” (2006), our red-nosed hero is a dope-smoking reprobate taking a stovepipe-hatted Lincoln, who’s brandishing a Hitler mask, and a chocolate-brown Shirley Temple for a ride on his back. But Shirley’s been shot in the head, with her eyeball popping out. Rudolph’s sleigh is a ratty shopping cart filled with white fleece and trashcan pickings, and bringing up the rear is a green-lipped, hip-swiveling Rasta-Santa toking a huge joint and singing Christmas carols.

But “USS Sperry” (2006) is the showstopper. Its black lights and fluorescent paint engulfs the entire back gallery, submerging the viewer in a cartoonish, radioactive lagoon. Glowing barrels imprinted with nuclear symbols litter the ocean floor between rock outcroppings and coral blooms. A frogman monitors atomic levels with a Geiger counter among schools of tropical fish, floating bubbles and anchor chains. Based on Caine’s own experiences in the Navy while serving aboard the USS Sperry, this scene, aside from a bug-eyed sea horse, should be viewed as a serious take on radioactive waste disposal by way of his trademark insouciance.

As a child, Peter Caine dreamed of three career paths. One was to be a veterinarian, which he’s pursued through a love of, and caring for, animals. Second was to be a stand-up comedian. He’d stay up late and tape comic routines from the “Johnny Carson Show,” then work up his own acts. Third, after visiting a Van Gogh exhibition, the child Caine knew he wanted to be an artist. (Poor Vincent. If he could see what his work inspired, he might well chop off his other ear.) A fourth career the artist might have picked is cinematographer. Each of his ambitious tableaux is designed with an eye for the dramatic. Characters are cast, the staging is blocked, actions programmed, costumes chosen, props selected, lighting devised, dialogue written and recorded. Smoke and bubble machines, electric balls, antique fans, and mechanical gizmos of all kinds lend the shebang the sensation of a grungy mad professor at work on some diabolical passion play.

After a couple of visits and a period of Kantian contemplation to clear my aesthetic palette, I concluded that much of Caine’s staying power springs from a double-edged nostalgia. To one side are innocent memories of visiting Christmas window displays featuring Santa and his elves making toys, Mrs. Claus baking cookies, and reindeer flying over rooftops. The darker, more magnetically disturbing side recalls the bawdy humor of bathroom joke books—or the pioneering, sexually explicit provocations published in Zap by the great underground comic artists S. Clay Wilson and R. Crumb at their most puerile. Childlike ingenuity and the desire to create a fantasy world slam up against an over-the-top indecency that rivets the viewer with an almost masochistic challenge to probe his or her levels of personal propriety.

The recently closed Dada exhibition at MoMA, with its rugged materials and abundance of repugnant subject matter, exposed one root of Caine’s anti-aesthetics. Pollock’s piss-like dribblings or Twombly’s fecal-like globs, which morphed during Proto-Pop into Peter Saul’s garish cartoon heads, might be another. Satirizing racial stereotypes has been acceptable when it comes from established African American artists like Robert Colescott or Michael Ray Charles, but what kind of response is appropriate when these jibes are posited by a white guy?

Among the questions nettling the viewer is whether Caine is a cutting-edge transgressive bad-boy, tweaking both the middle class and the intelligentsia while making a mess of art market civility, or is he just some wacky, overly energetic hayseed with a perverted sense of humor? Whether the world beyond the precincts of Williamsburg is ready to validate Caine’s vision, who can tell. Meanwhile, we can amuse our selves by taking bets on whether the avant-garde’s covenant with unbridled creative expression trumps its current commitment to the politically correct.

A Time of One’s Own: The Struggle Against One-sided Narratives of History

The relationship to time escapes me regularly, and vice versa, due to a chronic desynchronization—an incompatibility of cruising speeds, even—that I experience in my ordinary quotidian life and in my artistic practice. Moreover, the gap between the measurement and the evaluation of time varies significantly according to cultures, eras, and perspectives, and is also reflected in elements of language and in current prejudices that consist, in particular, of praising the strong allure of the great powers as opposed to celebrating slowness.