As the title of Nicola Lopez’s current exhibition Overgrowth suggests, much of her work is devoted to the negative transformation of the environment by our glorification of technology and the ever-accelerating pace of urban development. 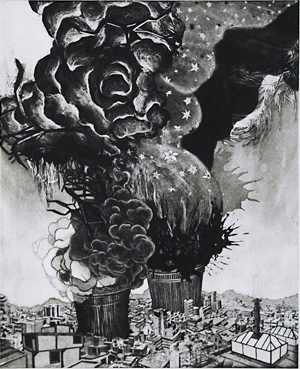 Lopez presents several large works on paper depicting familiar yet bleak and unsettling landscapes. In these collaged, composite images, chaotic multiple perspectives aggravate a sense of vertigo, while dark, acrid colors intensify feelings of anxiety and (dis)-ease. Unstable and collapsing worlds seem overrun by technology. “A Little Fallout” (2006) features industrial buildings under attack from cannons apparently operated by machines falling from the sky, while “Silver Lining” (2006), a small intaglio print on paper, offers a singular, less dizzying point of view that enables the artist to be specific about a particular technology. Here she depicts two menacing nuclear reactors ludicrously located in a densely settled urban center, spewing filthy dark smoke like ancient coal furnaces into the sky. The reactors dwarf the city below, underscoring the monumental threat lurking in nuclear energy, as the two inky plumes, seductive in their crisp, velvety detail, dominate the image. But in a clever twist the artist includes some small elements of relief. Floating amid the smoke are flowers and fragments of reticular branches, perhaps signaling that the reactors may be “giving up the ghost.”

Five woodblock-on-Mylar collages, shaped into three-dimensional mutant hybrids of communication towers, space stations, and electrical generators, are installed throughout the gallery. Individual pieces with satellite dishes for heads ooze from the ceiling and cling to the exposed heating and ventilation systems and gallery walls. “Mirage” (2006), a large woodblock print pinned to the wall, resembles a horse with lattice-like towers for legs and monitors for a head and body. It appears to be carrying a rider of similar design on its back. Lopez once asked the question: What would happen if technology developed the ability to evolve? Well, it appears at least in this case, that it would behave not much differently from its flesh and blood counterparts. In the robot world, some creatures would be mules and some would be masters.

Beyond the Janus-Faced Typologies of Art and Technology

This column aims to focus on art that engages technology as a medium or a topic. We live in a digital culture and I have found that I better understand the technologies I use, as well as what to reject, in no small part through the thoughtful efforts of artists. I’ve grasped the subtleties of coding and computational design by hearing about how artists struggle with it. I’ve reconsidered the history of art because it suddenly seems so strange that the last five hundred years of creative practice could be presented as if these artists were not responding to, discussing, and adopting technologies ranging from perspective, gross anatomy, printing, navigational charts, biological categories, camera obscuras, trains, electrification, photography, moving image, and here we start to get into the more recent technologies that are so easily disdained: television, computers, the internet, social media