After September 11, images of the Twin Towers began to appear everywhere. Not just on television or in newspapers, as one might expect, but in previously overlooked places, noticed for the first time in the aftermath of the catastrophe: painted as part of a logo on a commercial van, for example, or in a cityscape mural on a restaurant wall.

Matt Freedman looks beyond these literal representations to explore deeper connections between September 11 and ordinary life. The artist writes that Twin Twin II, an ongoing work about the World Trade Center, “began with the pedestrian observation that we are reminded every day in some specific way of the attacks….” Initiated in 2004 and filling the rear gallery at Pierogi, the installation includes such common objects as two stacks of shortbread cookies in a cookie jar; a pair of upended crutches leaning against the wall, with one missing a rubber tip; two belts hanging from a wire rack; and dual stacks of CDs and newspapers. Freedman also modifies existing objects—adding two monochrome stripes to thrift-store paintings or cutting rectangular slits out of a suitcase—and affixes small statuettes of the towers (made of epoxy on Styrofoam) onto others, such as an armchair. Most items are placed on tables close to the floor or low against the walls. The effect is disorientating—walking along the installation’s curving path, I felt like a moving skyscraper in a low-rise city—but also deeply moving. Overwhelming in their sheer abundance, these uncanny objects are initially unnerving but ultimately cathartic. 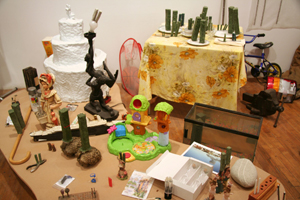 Compared to the $500 million memorial planned for the World Trade Center site, Freedman’s project is not only more cost-effective, but it’s also more effective emotionally. Twin Twin II demonstrates that remembrance doesn’t take place on a designated day or place; any object or image, however mundane, can trigger it anytime and anyplace.

Like Freedman, Matt Marello also focuses on September 11 in his exhibition, 1968 | 2001, using a variety of media: slide and video projection, DVD, lenticular images, and ink-jet prints. As a whole, the work (all 2006) explores the psychological condition of apophenia, the experience of perceiving relationships in random or meaningless data. This is best expressed in one work, “Jeopardy,” in which the artist digitally inserts himself into the game show—he plays all three contestants—and competes for one round. The six categories on the board—the World Trade Center, 1968, Apes, 2001, the Moon, and 2001: A Space Odyssey—summarize the connections interrelating all nine works in Pierogi’s front gallery.

A digital print on watercolor paper depicts a single astronaut boot imprint on what looks like the surface of the moon, but the work’s title is “Footprint in World Trade Center Dust.” “Slides: 2001 A Space Odyssey | Ground Zero” pairs stills from the 1968 Stanley Kubrick film with photographs from the World Trade Center worksite; the iconographic similarity between the movie imagery and the documentary photography is striking. In a single-channel DVD clip, King Kong climbs a WTC building to reach the moon; this scene is paired with another, taken from 2001, showing a band of apes frantically confronting the black monolith. (Since Marello uses several films as material, it bears repeating that witnesses of the plane crashes said they “looked like a movie.”)

Like Mark Lombardi’s intricate drawings, which map political, economic, and social networks, Marello’s work asks the question: Just what do these linked phenomena mean? The answer, in Marello’s case, is that they don’t mean anything. Consider the work “Jeopardy” again. The question to every answer is the name of another category. The contestants tie at the end of the round, but there’s no Final Jeopardy, no end of the game; the six-minute DVD simply loops back to the beginning.

The aloof, occasionally irreverent 1968 | 2001 seems to question the common wisdom of seeking closure on traumatic events. It also refutes the notion of a single, overarching narrative to explain the attacks of September 11, as conspiracy theorists or political conservatives would like to have it. Instead, Marello suggests the impossibility of a resolution, emotional or otherwise, at least for now. We are still too close to those events, and certainly a long way from coming to grips with them.

Troy Montes Michie’s Dishwater Holds No Images continues his use of textiles to tell stories of resistance, and expands his work in collage into a space-consuming format.