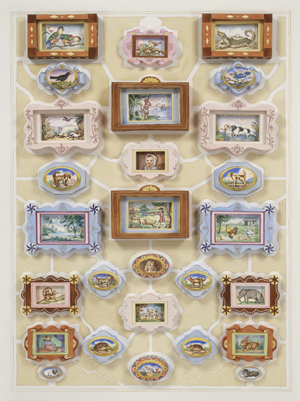 Maki Tamura’s preferred medium is paper. In the past, the Japanese-born Tamura created large-scale scrolls that, with a nod toward her Asian roots, unrolled down the wall and onto the floor. Her new body of work marks an intriguing departure. Simply entitled “Enlightenment,” this exhibition draws its context from the cultural and philosophical ferment of 18th-century France.

Aesthetically, the buoyancy of tonality and form in Tamura’s drawing recalls the Rococo movement, which briefly flowered between the dark drama of the Baroque and the severity of Neoclassicism. Rococo derives from “rocaille,” meaning “rock work” or “shell work”—natural forms that bear a relationship to Tamura’s paper structures. The individual watercolors comprising each work, however, allude directly to Enlightenment themes.

At first glance “Discovery” (2006) brings such visionary Rococo masters as Fragonard and Watteau to mind. Lush landscapes and a seductive pastel palette set the tone, while the era’s belief in reason as the supreme adjudicator of aesthetics, ethics and logic is illustrated by depictions of children at their studies, adults reading books and a scientist experimenting in a laboratory. Among the motifs, one small portrait stands out—a girl whose aristocratic pose, costume and hairstyle evoke a young Marie Antoinette, unaware of the combustible future awaiting her. Her execution in 1793 at the height of the French Revolution would come to signify the culmination of an era notorious for its decadence, frivolity, and excessive royal power.

To draw a parallel to today’s world of superficial media snippets, exhibitionism, quick and easy consumption, corruption and greed, as well as the monopolization of economic and political power, is not too farfetched. Although the thought that Tamura chose the struggles of late 18th-century France as analogues for contemporary problems is mere assumption, her works nevertheless give rise to questions like: How much has Western civilization improved in the past 350 years? Are we on the verge of progress or regression?

But whatever her message or motivation, all Tamura grants us are glimpses of thoughts, consummately crafted into elaborately beautiful surface structures. While they reward patience and close observation, these images resolutely remain verses of abstract poetry, resisting sheer literalism.