Although they run their programs throughout the summer, London galleries don’t really turn up the heat until around the third week of September, in anticipation of Frieze, the most “fashionable” art fair in the world (October 12–15: friezeartfair.com). White Cube’s new West End space opens with a show of Gabriel Orzoco (whitecube.com) and Hauser & Wirth inaugurated their new secondary market space with Picabia nudes (ghw.ch). At the other extreme, a David Hockney portrait retrospective has commenced at the National Portrait Gallery (npg.org.uk). Although London’s recent success has been tied to the YBA’s, Saatchi and Jay Jopling, it is a group of post-YBA, post-conceptualists that seem to be determining the month’s wit and theater.

Mark Wallinger offers another brand of humor that is less mischievous but just as critical as Ondak’s. One of his pieces, “A is fur Alles,” consists of a simple modernist divan emanating the hum of an orchestra tuning its instruments to A. Not by coincidence, the name of the orchestra creating the sound is “Divan,” which was founded by the late intellectual Edward Said and conductor Daniel Barenboim to bring Palestinian and Israeli musicians together. Perhaps the fact that we hear the orchestra tuning up, but not playing a piece of music, suggests that the moment of working together has yet to arrive. The other piece at Reynolds is a spare and simple 12-minute movie that parodies the end credits of a feature film. Over the tune of Strauss’ “Blue Danube Waltz,” these end credits begin with God and lists the “cast” of the Bible until the appearance of Jesus. It is aptly titled “The End.” In the past, Wallinger has touched on ideas that underpin our notions of culture and religion—specifically British ones. This show is no different, if slightly theatrical in its presentation. No doubt, there will be a sequel, but in what form? 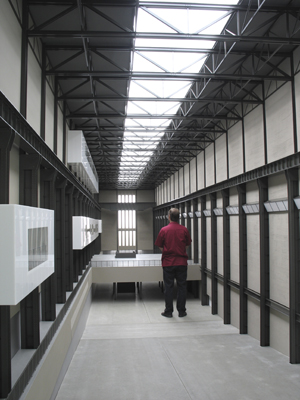 Tate Modern and Britain’s Art Now are currently providing rare opportunities to expose younger artists to more mainstream audiences. At Tate Modern, Slovakian artist Roman Ondák has created what can only be described as a scaled-down facsimile of its famous turbine hall, the cathedral-like space one encounters upon entering the museum, a former power station. The turbine hall has been the venue for a series of ambitious sculptural commissions, punctuated occasionally by groups of sculptures from their permanent collection. (The next commission will be from Carsten Holler.)

In Ondák’s “man-sized” version of the turbine hall, we move about—in an inversion of the original—as giants in the space. Along with the amusement of this novelty, there are also some serious meditations at hand. Having scaled the work to fit the room, and with the real hall mere minutes away, Ondák touches upon mimesis and representation as well as memory. This work questions our ideas of representational sculpture on the one hand while its toys with the notion of doubling on the other. There is an element of humor involved in Ondák’s work, like his project for the 2004 Frieze fair, in which a group of people formed and reformed into a queue, or another piece, retrospective, which was comprised of all the gallery labels from his previous shows. But there is also a serious attempt to draw attention to the institutional context of the work. With this piece, titled “It will turn out all right in the end,” Ondák seeks to alienate his viewers while reintroducing them to their surroundings, albeit with a smile. 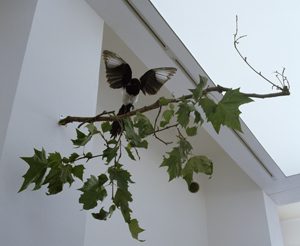 Cerith Wyn Evans, Installation shots from “take my eyes and through them see you…” ICA galleries (2006). Photo by Marcus Leith, (2006). Courtesy of ICA galleries.

Cerith Wyn Evans has created a rather special exhibition for the ICA, a venue he has cherished since his youth, when he was inspired towards his own creative endeavours by Marcel Broodthaers’ last show in 1975. A protégé of the English avant-garde filmmaker, Derek Jarman, Wyn Evans created experimental films and music videos before turning to the visual arts.

Broodthaers’ specter is channeled through Wyn Evans’ “Take my eyes and through them see you…” (also the show’s title) in which a film screen stands in the center of a room decorated with potted palm trees, a scenario also employed by the Belgian artist. A film plays a loop of white leader that runs for four minutes, then a loop of black; as time passes the film eventually registers the scratches and dirt from its passage through the projector’s gate. Here, as he has done in past work, he is invoking the question of what is exposed and what is veiled. Reminiscent of Jarman’s film, Blue, there is a sense in which this piece, and possibly this show, is an homage—like Thomas Hirschhorn’s sculptures of philosophy books—to Wyn Evans’ various creative and intellectual mentors.

However it is Wyn Evans’ first piece, in the main gallery, that is the most eye-catching. Titled “Decor,” after the Broodthaers show, it consists of one easy gesture: the artist has removed a false wall to reveal the dirty and undecorated windows and alcoves lurking behind, exposing their structure and the streets beyond—an empty hall á la Michael Asher, circa 1970s. But Wyn Evans claims that what’s poignant for him is the show’s very subtle reference to the cannons that Broodthaers’ aimed out onto the street, pointing at the Cabinet War Rooms, Downing Street and the Houses of Parliament. This fact is not altogether obvious, since nothing in the installation seems to allude to them; instead, the forlorn emptiness of the gallery speaks volumes.

McCorkle’s camera moves are minimal. She allows her images to linger on screen. Things feel informal and sincere, allowing the viewer to settle in and listen.