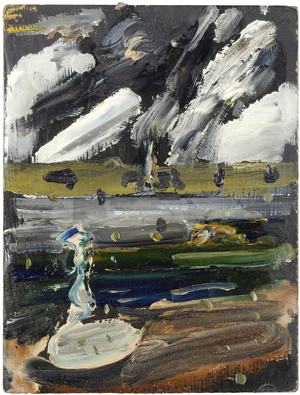 These small paintings come from a specific place—Seal Point—in John Walker’s adopted homeland, Maine. They are painted on old bingo cards that Walker undoubtedly encountered in his foraging sorties in the Maine countryside. Hints of numbers linger beneath the surface, and the faintest memory of the printed grids sometimes paradoxically suggest a kind of aleatory structure, very much of our time. But also, not very much of our time. This play with time and apparitional imagery has always been characteristic of Walker’s endeavors, and never more so than in his contemplations of landscape. It was there in the wild and colorful landscapes of Australia; there when he first began his retreats to Maine; and there even in the huge abstractions of earlier years in which forms heaved and thrusted and, in the end, made a place. A painting.

The art of the landscape painter has a noble tradition, especially in England where Walker spent his formative years, and where, undoubtedly, he first encountered his marvelous ancestor, John Constable. “It is the business of a painter,” Constable wrote in a letter of 1842, “not to contend with nature and put this scene on a canvas of a few inches, but to make something out of nothing, in attempting which he must almost of necessity become poetical.” Walker has always known the business of the painter. The evidence is in these splendid variations in which, like Constable, he takes note of the weather, the time of day, the shifting skies, and the topography of the land confronting the sea. And he does it, astonishingly, on surfaces of only a few inches.

There is another legacy as well. Walker, who knows the history of his art and has often alluded to his brothers in art history (for a long while, he directed us to Velasquez and Goya), has clearly cast an affectionate glance at Cezanne, whose stubborn and exacting study of a single motif in hundreds of drawings and paintings so much affected modern art history. In one of his last letters to his son, he wrote:

Here on the edge of the river, the motifs are very plentiful, the same subject seen from a different angle gives a subject for study of the highest interest and so varied that I think I could be occupied for months without changing my place, simply bending a little more to the right or left.

Walker has extended the great tradition with remarkable prowess—the kind of intimate knowledge of his means that offers him immense liberties. He loves paint. He has a thousand little tricks that call up the chromatic range of his palette; the gradations of transparencies; the retreating of certain colors; the expostulatory climaxes of saturated hues. These paintings on a few inches of cardboard display a range of techniques that only long years could develop. They are, to use an old word: masterful.

And they are, to use Constable’s word, poetical. In other words, allegorical. Like all good paintings, they can be read on more than one level, and tell us not only of the emotions that moved the painter to paint, but also of his ambition to remark what no one but he could remark. Yes, these are landscapes with a stunning range of emotional tone, but they are also abstractions, to the highest degree, of Walker’s experiences, not only before the motif, or as the French say, on the motif, but of his generously endowed imagination. Although there is frequently a horizon line to guide the viewer, Walker conflates the various aspects of his rugged place, and in exquisite harmonies, creates his own place that hovers somewhere between the painting and the eye that travels its surfaces. He is clearly a man for all weathers.

Early on Giorgio Morandi was a familiar, but marginal figure within Italian Futurism, who by the time of his death occupied only a modest place in modernist collecting culture. Thanks to important historical work by Janet Abramowicz in Giorgio Morandi: The Art of Silence (2005), we have a reliable account of Morandi’s life. To this growing corpus, we can now add the perspectives of other contemporary artists collected in Zwirner Books’s Giorgio Morandi: Late Paintings.