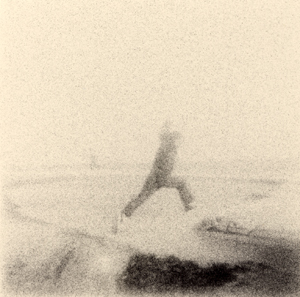 The subject of John Brill’s current exhibition—photographs he took as a child—might seem like an exercise in nostalgia. That it isn’t is as much a credit to his eight-year-old-self’s sense of composition as it is to Brill’s virtuoso printing technique.

Children often shoot photos in disarmingly direct ways, and Brill’s images are no exception. But the works in Bad Memory are not reprints from old negatives. Rather, they are complexly layered composites—photographs of photographs of photographs—that distance the images from their source, not unlike sound or video dubbed from copies of copies of tapes. Brill doesn’t leave these distortions to chance but adjusts contrast and elides detail, diminishing the picture’s specificity of reference. Through selective bleaching and burning, Brill often pushes his images to near-abstract fields of gray, lending his surfaces an austere, modernist elegance.

In several pieces, the photographic grain is the most prominent element of the picture. By emphasizing the grain, Brill would seem to be treating the materiality of pre-digital photography in a manner analogous to David Reed’s paintings of brushstrokes, as a representation of photographic crystals rather than the crystals themselves. By representing the material used in representation, Brill seems to be aligning himself with postmodernism, but, at the same time, his graininess, exaggerated contrast, and erasure of detail approach the look of early calotypes.

All of which is to say that the formal and aesthetic aspects of Brill’s work feed into his conceptual concern: the relationship between photography and memory. Brill’s representations manipulate snapshots of past events into material correlatives of memory itself. His images fade in detail but ripen in formal beauty with each succeeding exposure, just as memory is enriched and erased by layers of time.

Brill therefore reverses the common experience of viewing photographic images, which is often an indictment of memory’s inability to endure and remain fixed. He uses the darkroom projector and developing fluid, the tools for perfecting verisimilitude for most of photography’s 167-year evolution, to endow his own imperfect recollections and bad memories with painterly texture and flux. Brill’s fogged and slippery images—a boy in a coat, a bleak industrial landscape, a cloud-filled sky, waves along the shoreline—are retinal impressions performing an extended disappearing act, which is all that memory is.

MATTHEW L. MCALPIN is a literary critic and contributing writer for the Brooklyn Rail.

The group of paintings that comprise Helmut Federle’s fifth solo exhibition at Peter Blum Gallery originate in a work made in New York City in 1979 after moving from Basel, Switzerland. He would stay in New York City, with some interruptions for four years.

Mother and Child, curated by Micki Meng, gathers the works of 17 artists who square timeless iconography of motherhood with the immediacy of touch.

Jennifer Bolande: The Composition of Decomposition

Now more than ever, we are faced with news that rapidly turns into history, having to instantly make sense of and adapt to the current state with which we are presented. Bolande’s decades-long practice probes this process as we experience the proliferation of online news outlets.