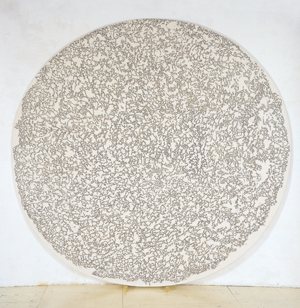 A true announcement of the law of creation, if a man were found worthy to declare it, would carry art up into the kingdom of nature and destroy its separate and contrasted existence. —Ralph Waldo Emerson

Jim Long, fellow contributor to the Brooklyn Rail, is exhibiting four monumental tondi, entitled For Jaganatha 1 through 4 in a show organized by Rackstraw Downes at CUE Art Foundation. These paintings, the culmination of over two decades’ labor, have much in common with the work Long exhibited at Sarah Bowen this summer, but at 126 inches in diameter, they take on a new grandeur. Their scale, though, tellingly enough, not their format, is similar to the work of New York School greats like Pollock and Newman who monumentalized their own existential states of being. Ultimately, the scale of their personal statements became a problem for a succeeding generation who retained the monumentality, but sought a more objective language in minimalism and color field painting. Jim Long explores these issues with a rigor equal to his groundbreaking predecessors without unreservedly accepting their conclusions. In doing so, he opens up a certain current of painting that some might have regarded as settled—the relationship between objectivity and subjectivity.

To develop the imagery for the Jaganatha series, Long floated oil paint on a bed of water and captured its fragmented forms on a circular sheet of Mylar. He manually enlarged these images to scale for the 126 inch tondi and painted them in thin strokes of deep sepia. The images generated by the oil in water are striated like fissures in the earth seen from the sky or the surface of cheese in the latter stages of decomposition or something you might see in a Petri dish. In other words, they have an archetypal look of the patterns generated by natural processes on the micro and macro biotic scales. The Petri dish analogy is perhaps most visually apt. The circular canvas acts as a container for the circular pattern of the fibrous imagery, which increases in complexity from the tondo’s center outward, growing into an almost absurdly intricate pattern of interlacing lines before exhausting itself inches away from the canvas edge.

The fact that Long chose to render these skeins of paint by hand implies an obsessive preoccupation with their form and the larger meaning it suggests. It appears that Long has caught hold of a paradox: Throughout the 20th century, concepts of space and time were hypothesized that involved spans far beyond the boundaries of human experience. It’s easy to imagine 100 years, the length of a lifetime in the best of circumstances. Perhaps one can imagine 1000 years—the life span of 100 people lived end to end. But what face does one give to 10,000 years? Let alone the infinities of space that quantum physics asks us to contemplate. How does one create an image of that which one cannot visualize?

This is perhaps why Long resorted to trading in opposites. To create an image of that which is unthinkable, one is forced to bypass reason and rely on intuition. Long opposes oil and water to generate imagery evoking the literal condition of the physical world. By allowing a technique to determine his imagery, Long is absenting, as much as possible, human agency in pursuit of the real (Which could be seen as diametric opposite of the New York School). The real was also the goal of post painterly abstraction and minimalism which focused on the materials of production to the exclusion of all external considerations. Long, on the other hand, makes external considerations central to his project, attempting to move beyond the technical and philosophical constrictions of his medium.

According to Emerson, there is a noble quality to such an endeavor because it calls attention to the natural world and to our own natures as the elemental source of aesthetic work. As if in affirmation of this ethical perspective on his artistic process, Long comments in his artist statement that the Sanskrit root of Jaganatha is “Protector of all that moves.” If such a thing as ethics in art can be said to exist in our postmodern, relativist stew, then, without making a religion of either science or art, we might use art to attain an intelligible picture of the natural world, and by doing so, begin to understand how best to act in it.

Women have shared their wisdom with one another for millennia, in oral histories that teach and inform subsequent generations of women about family, home, sex, power, politics, and survival. But patriarchal histories didn’t include these contributions. Huh!

Show Me Your Original Face: On Tsai Ming-liang’s Your Face

Framed in phone booths, freeways and supermarkets, a Tsai Ming-liang film gazes with moist, unblinking eyes at everyday life—the slightest glint directing us towards the curiosities that line it.