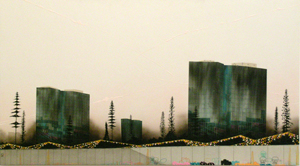 Employing sharp-edged realism and a novel technique of collage-as-painting, these intensely crafted, low-relief images have affinities with Kara Walker’s cutout silhouettes as well as anime. Benson painstakingly cuts a wide range of shapes, down to the smallest details, from prepared dried skeins of acrylic paint. He then attaches the decal-like pieces in layers to the surface of the canvas. In “Anniversary,” brightly colored forms, applied in crisp modular units, represent an apartment complex under construction at the edge of a city. Benson achieves a remarkable verisimilitude when he chooses colors that directly relate to their real-life equivalents, such as construction pink and earth brown. But he occasionally departs into more expressive usage, as when he suggests equivalence between the building of the painting and the construction of a city by leaving the earth the same color as the canvas.

Benson’s restrained palette reflects the cool, dispassionate atmosphere of the generic modernist glass box. He reminds us that modernist architecture began as a revolutionary movement with the intention of transforming society and reshaping the world, and that we now know this did not happen, especially for the buildings in these paintings, which tend to dominate their surroundings despite their isolation and apparent neglect.

In “Liars (Talking Skulls),” the once shiny symbols of modern, streamlined efficiency are now relics tinged with grime. A banal, graffiti-covered cement wall separates them from the foreground, which may or may not be a superhighway. Low-lying, soot-colored clouds suggest that the buildings are sitting in their own pile of pollution—apt symbols of the rifts between urban and landscape planning, architecture and the humans it was meant to serve.