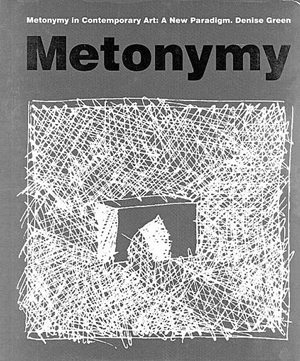 I first noticed the work of Denise Green, an Australian residing in New York since 1969, at the New Image Painting exhibition held by the Whitney Museum of American Art in 1978. Her paintings, along with those of Susan Rothenberg and Robert Moskowitz, marked a revival of the image or sign within the gestural field—a painterly concept generated by Jasper Johns more than two decades earlier. The year 1978 was also when the term “pluralism” became widely used, but only a handful of critics seem to use it correctly. Few understood that “pluralism” was an inevitable response to the breakdown of the Greenbergian hierarchy of aesthetic judgment.

In her book, Metonymy in Contemporary Art: A New Paradigm (University of Minnesota Press, 2005), Green outlines her understanding of Greenberg’s formalist position and her complaints against it, which are complex, far-reaching and personal. From her perspective as an Australian, Greenberg’s reluctance to accept narrative structures in painting precluded his ability to embrace multicultural art. She goes on to show that Aboriginal art in Australia has no meaning in formalist terms because its meaning rests on telling a story related to the community, and the manner in which that story in embedded within the artist’s imagery. Were it not for the evocation of narrative, these paintings would be inaccessible to the majority of Western viewers.

Metonymy—a term coined by the ethnologist Claude Levi-Strauss (as cited by Dr. Roland Moenig in his superb catalog essay for Green’s retrospective, reviewed below)— assigns no specific meaning to signs, as opposed to symbolism, which sets up a direct one-to-one correspondence between a sign and its referent, as in medieval iconography. Rather, it allows meaning to spread “in all directions, absorbing and conjoining ever new aspects of reality (near and far, conscious and unconscious, present and past …)” For Green, Aboriginal sand paintings—and, by association, her paintings—are less about form than about meaning; they are not about duality, but fusion and wholeness—an argument that emanates from traditional Eastern aesthetics. If Greenberg’s formalism held that all signs point inward, namely, to the medium itself (i.e., that painting is essentially about painting and sculpture is about sculpture), Green affirms abstract painting’s capacity to evoke personal feelings from the unconscious.

Denise Green is a painter and a critic. While she unequivocally puts painting at the forefront of her activity, she has written extensively on issues in contemporary art, often raising difficult issues that others refuse to confront. For example, in Chapter Two of Metonymy, she argues that the German critic Walter Benjamin understood the mechanical arts (photography and film) much better than he understood painting and sculpture or other arts created by hand. Given his limitations in understanding non-mechanical aesthetics, he saw politics as the logical direction of art’s purpose and often ignored the religious and ritualistic aspects of art.

From Green’s perspective, this distanced Benjamin from understanding “the Eastern notion of time” that is less linear than cyclical. His socio-political agenda is strictly western and therefore dualistic in its analytic precept. The sign and referent are too rigid, and therefore function in opposition to much Eastern philosophy, which tends to play with the openness of meaning in given structures, such as the mandala in painting, or even in certain ideograms and cursive forms of calligraphy. Green cites the “concentric nests” posited by the Indian poet and linguist, A. K. Ramanujan, in which narratives read as “encompassments” of the soul. Thus, Green’s Metonymy is about returning art to a kind of primal thinking and feeling where sensations move in and through the mind/body rather than functioning outside the terms of internal experience.

Green’s retrospective exhibition ran throughout the summer months of 2006 at the Museum Kurhaus in the Rhineland town of Kleve—the hometown of Joseph Beuys, whose early studio was, at one time, in a downstairs room in an unrenovated section of the museum (formerly an old bath house redesigned in the early nineties by Walter Nikkels). Beuys’ work has been an inspiration for Green since the seventies, especially his interest in shamanism and myth. The retrospective, curated by Roland Moenig, is a superbly outlined exhibition of paintings and drawings, beginning from 1972 to the present, that reveals the consistency of her visual themes—such as Etruscan vases, windows, architecture, ladders, oriental fans, flowers, vertical stripes, and occasional figures—and the artist’s commitment to her ideas. There is a unforced quality throughout this accounting of her work, which begins with a watercolor of the “World Trade Center Plaza” (1975) and ends with two large triptychs entitled “A Rose is a Rose is a Rose” (2005), one predominantly in red, the other in yellow, dedicated to A.K. Ramanujan and inspired by the memory of the Mother.

Also included are an extensive series of ink drawings from 1976 in which Green represents singular objects in a square space, including sections of architecture, both ancient and contemporary, as well as a figure, a sledge, a leaf, even a hybrid animal. In 1977 she proceeded to paint these objects on large square canvases. Two of the most striking paintings from this series are of the sledge, entitled “To Beuys #2”, and another from the following year, “To a Bearded Lady” (1978) in which a flat black “ghost vase” (as they are sometimes called) is asymmetrically positioned on a dense violet square with a series of thin vertical white lines beside it. Over the years, Green’s paintings have remained mostly within the square format with occasional forays into rectilinear space, as in two exemplary mural-size paintings done at the time of the attack on the World Trade Center. One, entitled “Surveillance #2” (2001), is painted in two panels. The objects represented on each panel include vases, fans, and generic, medieval-looking towers, painted with red and violet glazing. The other, entitled “Re-Witnessing” (2001), reiterates the theme of the vertical bands from the 1972 watercolor, “World Trade Center Plaza” but this time using ghost vases, amphorae, and two overlapping fans. The effect is quite moving given that “Re-Witnessing” was painted nearly thirty years after the watercolor. The two works might serve as historical bookends related to the artist’s experience of having lived with these iconic towers since they were built, always within close visual proximity to her studio.

Finally, there is a site-specific installation designed by Green based on a series of small 35.5 cm square panels (approximately 13 inches)—painted largely in earth tones with red, green, and yellow glazes—focusing on a single object, an L-shaped block of carved stone. The stone is a fragment from the Frauenkirche, the famous Baroque cathedral in Dresden, which was destroyed by the Allies in the Second World War.

The fragment was given to the artist by one of the workmen rebuilding the cathedral, and it became the leitmotif for Green’s painting/installation, entitled (as a group), the “Square Column Series” (2006). Each painted panel, which depicts the fragment in isometric perspective, is placed in a straight vertical configuration of four to five panels. Six vertical groupings have been beautifully installed in the rear of the museum’s lower level.

The “Square Column Series” is the culmination of many of Denise Green’s motifs over more than three decades—not only from a formal point of view (as much as she eschews formalism) but from narrative and semiotic themes as well. Green’s metonymic link with the destroyed Frauenkirche is not unrelated to that of the World Trade Center nearly a half-century later. Not that one wartime catastrophe symbolizes another or is any greater than another; rather, both are interconnected as monuments within history that have disappeared in a fervor of violence.

From a more intimate point of view, Green has often reflected on the death of her father and mother by means of imagery taken from another place and time; this is a more personal interpretation of the metonymic paradigm, in which the unconscious revelation of grief comes to the surface. Without forcing the issue, Green is trying to restore to painting a sense of reality that is beyond repression and anxiety, and thus, to explain how painting can still perform in a way that commercial media and advertising cannot. Her paintings are not about reflecting the times. She is not painting mirrors. Instead, they are about being in the center of time, within time, and open to the possibility of significance.