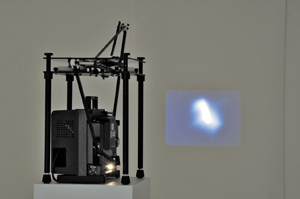 View of Installation at HOLIDAY. Courtesy of artist and gallery.

September in the art world has looked so far like what it is every year: an exercise in Dionysian excess. But thankfully, miles away from the clamor in Chelsea, HOLIDAY, has gone ahead with its modest business-as-usual from a converted garage on the outskirts of Williamsburg.

HOLIDAY’s unassuming one-room gallery opens directly from the sidewalk of the tree-lined street. It has no smug gatekeepers sitting behind desks and no teams of preparators; just some supporting literature on a ledge, four sturdy walls, and, currently, the assorted elements of a multi-media exhibition by Bill Albertini that fits the space so perfectly, you’d think it was installed there permanently.

In the center of the gallery, a 16mm film projector clatters as it casts an ambiguous, milky-blue ball of light onto the back wall. Over the duration of “Liminal Space,” a three-minute loop, the ghostly image gradually resolves into a churning, three-dimensional form enclosed within a transparent cube. The shape initially suggests something magnificent and cosmic, but soon feels more like a writhing, plasmatic microorganism desperately trying to free itself from the cube. It does this with a captivating rhythm, and, in concert with the droning hum of the projector, the experience is altogether hypnotic. All you need is some trance music and a body-length sofa.

Albertini’s artistic intentions, however, are esthetic, not anesthetic, as ascertained by how the trippy animation relates to the other pieces in the show. On the wall flanking the projector are three 20×16 inch archival inkjet and watercolor prints. Each piece in “Frame Series # 1” depicts the wire-frame exoskeleton of the now familiar organism. The three depicted images represent frames 600, 700 and 800 of the film. The creature now seems unequivocally organic, but perhaps with silicone DNA.

An eight-foot-high silverpoint wall drawing on the opposite wall represents an enlarged, handmade version of the computer prints. As an independent wall drawing, the silverpoint registers as a delicate architectural rendering, but in relation to the film it gains biological associations and the somewhat imposing presence of a fossilized mastodon (without the following sentence I think ‘mastodon’ should be generalized to something like ‘dinosaur’ for fear of sounding too cute.) The same drawing, when paired with the inkjet prints, also reads as a 3-D blueprint for a character in a Pixar film.

Three types of mark-making—drawing, photography, and the computer-generated image —are represented in this exhibition, but the lack of an obvious sequence of production among the three frustrates our assessment of the original and its derivatives. The metaphysical and psychological nature of the form is thus thrown into a perpetual state of flux; its enigmatic soul forced into a looping, cubic purgatory.

Albertini’s artistic touch is spare, focused, and a little cagey. He holds his cards close to his chest, requiring a space without clutter or distractions to let his ideas unfold. As I left the gallery I couldn’t help but contemplate, as the mesmerizing film captivated the gaze of a lone spectator, the maelstrom of socio-artistic activity surging at that moment in Chelsea. The churning life form careening ceaselessly inside its permanent enclosure was a reminder, by contrast, of how liberating it feels to see the right art inside the right space.

It’s the summer of 2016. A gallery on West 20th Street offers its space for a month to a political action committee started by two artists. The show features art works that will be diffused as billboards and advertisements to engage voters in the November election.