To Bring Into the Worlds
Marian Goodman Gallery September 7–October 14, 2006 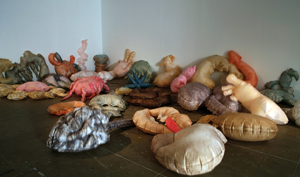 Friend or foe? Freud maintained that the uncanny is a mere change of light: that minimal, immaterial difference detectable in your girlfriend after she’s been replicated by invading body snatchers. The Dark Side is but alien malevolence hidden behind what’s most familiar.

Cabala holds that beyond the earth there lies a Shadow Realm for forms that failed, half-baked attempts gone too far wrong to merit an existence.

Languishing like throw pillows or hassocks in a harem, Annette Messager’s “Inflating/deflating” (2005-2006)—more than 30 outsized body parts made of painted parachute cloth, breathing feebly as if on life support, by computerized motors—constitutes a type of “torture morte,” turning Marian Goodman’s North Gallery into an eerie inner world fleshed out with our fondest fears.

Hands, feet, one pink pig-pile of almost pulmonary skulls, a human mouth or else (in view of a few sadly flaccid phalloi) could it be instead the dread Vagina Dentata? Guts. A crab. The life aquatic is necrotic.

Choosing a muted pastel palette drawn from haut couture cosmetics such as sand, pistachio, “plage” and blush, this elegant ensemble settles to the bottom of the sea, staining us with muck. Jaws—meet Charley the Tuna. Ambivalent bivalves. Enemy anemones. Alluring—then alarming— Messager’s environmental installation is an octopus’ garden cloaking the Black Lagoon.

Last gasp of the Neomorphs, these creatures may well constitute ontologically new life forms. Why do people pay for scary movies?

This atmospheric exhibit then winds through the hall to a kids’ w(rec)k-room, bedecked with drawn, propped, stuffed, and hung pieces. Spiders ‘n spikes. Here a teddy bear strung upside down resembles the Tarot’s Le Pendu. “Secret” (2005) is that one word spelled out in wingspread-wide suspended netting, an apotropaic apparatus designed to ward off evil. Yet, isn’t Atropos the Greek Fury who cuts life’s very thread?

In a humorous aside, Messager confides that it also makes wordplay of her first name: “A net.”

The artist says that if you ask children to draw their homes, they all draw the same stick-figure box with chimney and peaked roof, even if they live in an apartment. The soul may not exist, but we still feel it anyway.

During the Vietnam War—which the Vietnamese correctly called the American War—a popular protest poster read, “War is Not Healthy for Children and Other Living Things”.

Planet Earth’s now under fire from Africa to Asia. So, only deceptively naïf, Messager effectively portrays our human plight in a stubby wooden toy Army tank wagging a pencil from its turret, perched on top of a ping-pong-ball-sized painted globe.

Annette Messager was born in 1943. She attended the Ecole des Arts Decoratifs in Paris, which she was asked to leave due to absenteeism, playing hooky at the movies and museums. This, her first solo presentation at Marion Goodman’s New York space also marks the publication of Annette Messager: Word for Word: Texts, Writings and Interviews (DAP: edited by Marie-Laure Bernadac, due out in October)—a mesmerizing volume containing 300 illustrations of her hand-lettered works.

Often thought of as a fabulist, in a quote from Word for Word, Messager imparts only an artist’s consummate conscious conviction. “I don’t especially care about witchcraft and alchemy, even though I make full use of their forms.”

Clearly she knows where to draw the line.