Caridad Svich stands on a confluence of brutality and poetry with her play Iphigenia Crash Land Falls On The Neon Shell That Was Once Her Heart(a rave fable). A montage of sensory experience takes place on the play’s set (an aircraft hangar, battered and serrated); it begins with a projected image of Iphigenia on fire, her pink Chanel outfit melting, her skin aflame, while a techno version of Gluck’s opera Iphigenia in Aulis plays in the background. From the beginning, Iphigenia’s fate is clear—she will end up dead, as all of the Iphigenias before her have. Svich’s version, however, is a complex examination of this tragic figure who had little to say in the original play by Euripides, and introduces the outrage of tormented, sharp-tongued spirits to the world of the living. Taken together, Iphigenia’s wandering in the land of neon lights, kidnapping, torture, half-cooked chicken parts carried by a wraithlike woman, thumping music, paparazzi photographs, mad dancing, and the drug Ecstasy constitute Iphigenia’s search for life. Instead, however, she attracts the messengers of her certain death—the Fresa Girls, the ghosts of the Women of Juarez. “Everything in the play is in-between, in flux, with possibility before it,” Svich comments. Indeed, as soon as the audience grasps the course of Iphigenia’s fate, the history has already been altered. The routes to death are numerous.

The Iphigenia of Svich’s play is the privileged daughter of a corrupt general, who is adored by her father a little too sexually and abhorred by her mother. Caught between her love for her father and his clandestine murderous intent, she tragically denies her destiny. Her struggle to survive outside that destiny is colored by her entitlement, making her even more vulnerable. When Violeta Imperial, a grotesque, prematurely aged woman (and a victim of torture) prophesies her death, Iphigenia does not gain insight, but instead throws money at her.

Her fame as the General’s daughter further confuses her ideas about love; Achilles is both a solace and a thrill to her. Her relationship to this failed hero-cum-transgendered-glam-rock-star is contradictory and unpredictable. He is her savior at times, at other times her betrayer. Their affair is an emotional combat between two abandoned animals; they ravage each other, yet, end up licking each other’s wounds.

Achilles: You kiss without shame.
Iphigenia: Will you betray me?

Achilles: Will you forgive me?

Iphigenia: â¦Give me your hands.

Iphigenia: You have bewitched me.

Svich’s text is both ephemeral and deeply memorable. It is a unique language spoken by the beings that inhabit the intermediate world that she creates. It vacillates between poetry and realism, composing a unique theatrical, intercultural dialogue that fuses aspects of modern Latin American slang with U.S. media lingo and rock lyrics.

The inspiration for her play has its roots in the 1999 murders of the women of Juarez, and the subsequent rage and sorrow that Svich has carried since. “I was wrestling with my feelings of outrage over the hundreds of murders, the ghosts of all these dead girls along the borders, and I was also confronted with the lack of voice these women had in death. Had these women been Anglo, would there be more political outrage and action to truly finding their killers?” Svich asks. 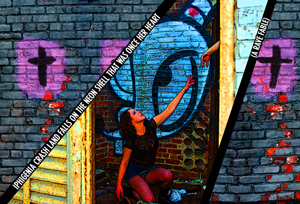 Courtesy of One Year Lease

Combining her desire to give voice to the voiceless (a running theme in her body of work as a playwright) and her interest in redefining Iphigenia’s final motive, Svich gives her heroine strength in her surrender to death. Through the landscape of elegance and cruelty, Iphigenia is no longer Euripides’ voiceless victim, who gave up her life for the love of the monstrous father, for the glory of his victory over Troy. In the end, the sacrifice of Svich’s Iphigenia is not political by design, but is meant to embrace the dead Fresa Girls who, as Svich put it in a 2004 TheatreForum article, were “killed by the hundreds in border towns along the Americasâ¦They are the dead whose deaths are not claimed: violated bodies left on roads, outside dance clubs, killed for sport, because they belong to an economic class which has no power.”

Iphigenia: I stand on the metal ledge.
Black liquid sand slipping off my skin.

The story has been told again.
A wreath has been placed upon Iphigenia’s head.

Every part of my body is breaking.

But I’m all right.

Give me your hands.

Give me your hands.

Iphigenia Crash Land Falls On The Neon Shell That Was Once Her Heart (a rave fable) will be produced by ONE YEAR LEASE at WalkerSpace from September 7-16, directed by Ianthe Demos and Danny Bernardy, original music by Brian Simerson. It is published in Divine Fire: Eight Contemporary Plays Inspired by the Greeks (Back Stage Books).

Chiori Miyagawa is a resident playwright at New Dramatists and serves on the board of A.R.T./NY.

Director Chen Shi-Zheng's Dragon Spring Phoenix Rise, a premiere for The Shed's inaugural season of programming, is billed as a “kung-fu musical,” meant to be innovative in its combination of cultural forms and sensibilities. Instead, it's a confusing mishmash.

Venceremos: Resisting the Rise of the Far-right in Brazil

In October 2018 fifty-five percent of Brazil’s voters chose to elect a far-right president. It is unsurprising that a country shaped by colonial thinking, marked by a horrific history of slavery, and mostly controlled by white oligarchies would adhere once again to such forces.

Internet Bulldozing: Gentrification and The Rise of Cyberharassment, BRUJAS Calls for Coalition, Again!

by Arianna Gil, approved by BRUJAS

As the state continues to selectively nurture and kill, BRUJAS asserts from the border to our local skatepark the need for young people to work together across difference, against oppression.

There is a prison in Syria, known as Saydnaya, where the prisoners can attest to that fact. In this prison, which is closed to international observers, the detainees are locked in near-total darkness, and blindfolded or made to cover their eyes, and it is estimated that, since 2011, some 13,000 of them have been executed. Their experience of this place, with its atmosphere of death impending through the walls, is known only and entirely through its sounds.