In William Shakespeare’s Twelfth Night, Viola, disguised as a male page, pleads with her mistress Lady Olivia, who has fallen in love with her: “I swear that I am not that I play.” In the mythical kingdom of Illyria, nothing is what it seems, and its people are not who they appear to be.

As in Shakespeare’s Illyria, the heaven of Young Jean Lee’s Songs of the Dragons Flying to Heaven (a “confused, disturbing and frequently offensive take on her cultural background in all of its romanticized, half-informed, and brutal honesty”), is a perplexing place where nothing is what it seems, and its people are not who they appear to be. 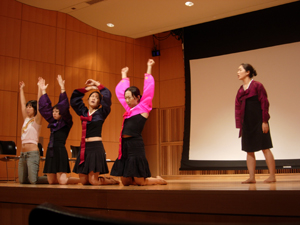 Just as in Illyria, in Lee’s pseudo-Korean world identities blend and contort while love reaches a quandary of atmospheric proportions. These themes run throughout the play and are repeatedly uttered by its nameless characters: White Person 2 claims that “The world and its people are not what they areâ¦ they are something completely other than what they are.”

The usual espousal of thought and outward appearance is thoroughly and completely divorced. For instance, rather than playing a juvenile game such as hop-scotch or double dutch, three seemingly innocent Korean girls prefer to play random sadistic sexual and self-loathing games like “hookers and johns” and “suicide.” In an attempt to express the futility of their young lives, through an extended series of pantomimes, the girls pretend to be crabs scuttling on the ocean floor and commit acts of hari kari, plucking out their eyes and setting themselves on fire.

The tragic irony is that they are incapable of making the distinction between the brutal games and the savagery that exists in their real lives. They equate prostitution with game playing, sexual slavery with dancing, and capital punishment with braiding each other’s hair. And while the girls have “fun” playing games, Korean 1 also attests, “Prostitution is fun.”

In a scene with Korean-American and Korean 2 (role-playing as a grandmother), Korean 2 expresses concern for her granddaughter’s brooding nature. Korean-American responds, “That’s just my act that I put on so that people will think I’m interesting.” Again, people are not who they seem to be. The Korean Girls masquerade for those around them. Whether the role is that of the subservient Korean girl or the Christian fanatic, neither offers the girls any comfort or reward. As Korean-American points out, “All is vanity because everything we try has already been done ages ago and was worthless to begin with.” After giving their audience what they desire, they undermine the little integrity they possess.

The Korean-American character appears to be Lee’s mouthpiece, though even this is elusive. In remaining true to the play’s theme of nothing that is so is so, the author even obscures her own identity: “People think of me as this empowered Asian female, but really I’m just a fucking white guy.”

Whereas the Korean characters struggle with their culture and tradition, self-esteem, sexual politics and racism, the rootless White Couple battles the demons of a more narcissistic culture: addiction, self-image and self-fulfillment within a relationship. However, like the Korean characters, both White Person 1 and White Person 2 are searching for an identity. White Person 2 says to White Person 1, “I want to be you. I will never be happy until I literally become you, until I am negated, blanked out, because everything that was once my individuality has become subsumed under yours, happily, forever,” (add end quotes) and White Person 1 reminds him that “there is nothing there.”

In a vain attempt to try to find themselves and create meaning in their mundane lives, White Person 1 repeatedly states, “I want to go to Africa and climb up into the banana tree and eat bananas with those monkeys and be happy.” These monkeys—presented earlier as Asian parents who misguide their children as they teach conformity and praise the importance of status, leaving the child “to learn how to be human from school and television”—offer solace to the beleaguered White Person 1.

Young Jean Lee takes a courageous position among her characters and refuses to place herself on a didactic pedestal. Resembling both the Korean girls and the White couple, she too is a mudfish “burrowing inside pieces of tofu to escape the heat.” She avoids proselytizing by holding herself accountable for the play’s incendiary racial overtones. In one of the Korean-American’s monologues, she says, “All I know is that I write this horrible, racist shit and then try to imply that I’m somehow fighting racism by being racist, and that being racist is a more effective way of fighting racism than actually fighting it.”

Songs of the Dragons Flying to Heaven, written and directed by Young Jean Lee, will be at HERE Arts Center from September 21-October 14. For more information, visit here.org.

Richard Fulco is a Brooklyn playwright and curator of the Night and Day Playwrights’ Series in Park Slope.

Yaa Gyasi’s second novel, Transcendent Kingdom, blends science and religion, the past and present, in a story about a small Ghanaian family that immigrates to Alabama.