On a recent Friday night at Webster Hall, Os Mutantes made their first-ever appearance on a U.S. stage. Thirty years after the Brazilian band’s original lineup split, they were back in remarkable form with a ten-piece band that literally entranced the crowd, while showing the Beck fans in the audience who it was that paved the way to his postmodern sound. Their performance was an audiovisual extravaganza that felt more organically mischievous and anti-establishment than any Flaming Lips show could aspire to be.

In the late sixties, while Syd Barrett was dipping the Beatles’ pop-rock blueprint in acid in London, Arthur Lee’s Love and the Doors were leading the freak-out on the Sunset Strip, the Velvet Underground were making dark noise in New York, and the flowers were blooming in San Francisco, something strange was happening way down south in SÃ£o Paolo. In a country that was chiefly identified with the soccer mastery of PelÃ© and the decadent Carnival festival, Os Mutantes were making their own idiosyncratic mark on the Age of Aquarius. In the shadows of a dictatorship where deportation and torture were the routine consequences of flouting government censors, Tropicalia was born. 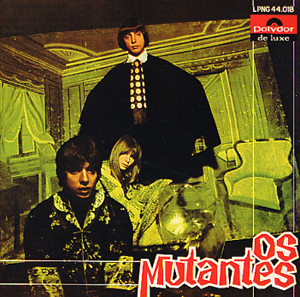 A whimsical concoction of Strawberry Alarm Clock/Zombies–type psychedelia and more traditional Brazilian samba and bossa nova, with anarchic pop at its core, Os Mutantes’ sound was like nothing that had been heard before. The female vocals of Rita Lee (who eventually left the band to pursue a highly successful solo career, and who gave her blessing to replacement ZÃ©lia Dunkan on the current tour), and the male vocals of brothers SÃ©rgio and Arnaldo Dias Baptista, gave the group immeasurable harmonic levels to play with. SÃ©rgio brandished a deft guitar with influences that included the Yardbirds, George Harrison, and Nokie Edwards of the Ventures. There were Arnaldo’s funky bass lines and kaleidoscopic keyboards. There were tablas and tambourines and the occasional Highway 61–esque novelty whistle. They wrote songs that were utterly buoyant and unpredictable, with odd sounds leaping in and out of the soundscape like characters in a theatrical farce. They were constantly experimenting with time-changes and arrangements that made their songs feel spontaneous and chaotic yet controlled, like navigating the hairpin turns of a mountain road only to safely land in wide-open space. This is best exemplified in “Bat Macumba,” which sounds a lot like Beck’s “New Pollution,” but without the benefit of samplers. Of course, it also contains a hint of “Taxman” in it that belies their key rock influence, the Beatles.

Os Mutantes were raised as society kids by artistically inclined parents. The Baptistas’ mother was the first woman in the world to write a concerto for piano and orchestra. Their grandfather played the viola. They all grew up listening to classical and Western popular music (they could tune into BBC broadcasts on short-wave radio), as well as traditional South American sounds. Before they had even recorded their first album they had honed their chops as the band on their godfather’s television show, The Small World of Ronnie Von. They wore gaudy costumes and pushed the permissible limits of the times with their antics, while somehow avoiding serious trouble. In the sixties, the Brazilian government was fond of inserting CENSORED cards in a program if they felt the message to be subversive. They had their suspicions about Os Mutantes, but the band was too elusive to pin down. Their lyrics were more about love and imagination than tyranny; instead of making blatant political statements they were disruptive in their execution of absurdity. They rebelled against the government censors by manufacturing more fun then any South American dictatorship would be comfortable with. Their contemporaries in Tropicalia, Gilberto Gil and Caetano Veloso, were not as fortunate and were deported to England. Other artists were known to endure torture or simply disappear. Os Mutantes were merely pelted with eggs and fruit by dismayed audience members who were offended by the perversion of revered Brazilian tunes (there were actual rallies against the electric guitar in Brazil at the time), prompting them on occasion to play with their backs to the crowd. In a recent interview with the Houston Chronicle, SÃ©rgio admitted, “There was a lot of competition within the audience to see who could boo us the loudest.”

Os Mutantes were among the original kitchen-sink sound-makers, and they did it mostly out of necessity. They were hearing Western sounds on records but were uncertain how they were created. They were well schooled in the basics of bass-drums-guitars-vocals, but they noticed the Beatles doing much stranger things in the studio and liked the sound of them. They heard tapes being played backwards and, oblivious to the technique involved, tried to approximate the sound in makeshift ways. They recorded the noise of bug repellant being sprayed near a microphone. They placed a tiny microphone into a coffee can, connected a plastic tube to it, and sang through it. SÃ©rgio and Arnaldo’s older brother built special equipment for them (which they used at Webster Hall). With their inventive recording methods and intuitive sense of rhythm and melody they became the engine of a unique movement that was largely missed by North American and Western European audiences. Aside from a handful of shows in Britain, they didn’t reach beyond the South American borders until after their demise.

Of course, Os Mutantes have gone on to influence a multitude of modern artists—notably Beck, whose 1998 album Mutations (which included the single “Tropicalia”) was named in honor of the band. Kurt Cobain attempted to reunite them in the early nineties, but they passed. Belle and Sebastian sampled one of SÃ©rgio’s guitar lines. In 1999, David Byrne released Everything Is Possible: The Best of Os Mutantes on his own label. Arto Lindsay, Tortoise, and Stereolab have also acknowledged the band’s importance.

New York City was the first stop on their micro-tour of the States (including an opening slot with the Flaming Lips at the Hollywood Bowl), and with pulsing lights, smoke machines, three drummers, eight vocalists, various multi-instrumentalists, and the kind of state-of-the-art sound system that wasn’t previously available to them, they filled Webster Hall with fevered elation. With a humble appreciation of the opportunity to reignite the energetic Tropicalia sound for a new generation of listeners, they put on a magnificent show that left nothing on the field.