Stars Like Fleas is a band that has grown from this kind of experimentation. Their last record (sun lights down on the fence) was reduced to seventy minutes from ten records’ worth of music, recorded from improvisations with guest players who were encouraged to take any direction they felt moved towards. What they are doing now is entirely different. No longer solely a studio project, they have grown as a live band.

“We’re creating different sets and different music for almost every space that we’re playing—though it doesn’t feel like an academic project,” says Fields. “There’s an emotional element, and people always get really excited about it.” Their forthcoming record, tentatively titled The Ken Burns Effect, is a collection of songs composed by all key members of the group, worked through in live sets, and in most cases recorded live in the studio.

We were invited to Fields’s basement studio in south Park Slope to hear some songs from the new record, to be released later this year after being mastered by Ben Frost in Iceland. The place is a maze cached with instruments and makeshift or appropriated noisemakers, perfectly illustrating the varied backgrounds of the players in Stars Like Fleas, and the constructive tension in the band between formal acoustics and electronic noise. After weaving through microphones and stepping around guitars and glockenspiels, we sat with Shannon in front of his computer, where he played us some rough cuts from the new record. 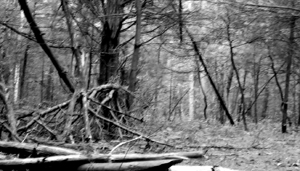 One of the first songs took us through several minutes of rich, dramatic strings—cello, violin, harp—but the longer the track played the more one noticed other sounds under the surface, and though less recognizable (or unrecognizable), they began to make their presence felt. What sounded like electric-guitar effects turned out to be processed voice, and sustained the tension between sound and noise.

A track he had shared with us earlier, tentatively titled “Mackie Melville,” contains a noisy, voice-heavy horn instrument. We debated before the visit as to whether it was some exotic or crude noisemaker. Upon inquiry it turned out to be a bass clarinet, an infrequently heard instrument that Stars Like Fleas embraces. “Matt Lavelle plays bass clarinet like no one I’ve ever heard,” says Fields. “Some people don’t want him to play it; they think he’s not good with it, or that it sounds awkward. But no one else puts so much voice into it.”

We first came across Stars Like Fleas at a Todd P barbecue in early June, where they played a seemingly impromptu acoustic set under heavy, taunting clouds. Shelley Burgon plucked the harp with a smile, holding off the rain. Vocalist Montgomery Knott hummed words through a yellow cone. And then the players put down their instruments and opened up in voice, singing as though in church. 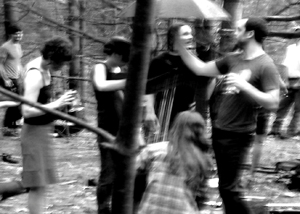 The possibilities suggested in their short acoustic set were enough to convince us to plan a trip to the Catskills. The band was participating in Brooklyn-based project space free103point9’s annual avant-folk weekend at Wave Farm, the thirty-acre upstate property that serves as a summer performance space and artist colony. We walked along the path, finding portable radios placed behind trees, playing eighties rock and Tom Petty, and heard someone splash into an unseen body of water; later, on seeing him emerge, we recognized the swimmer as Gerald Menke, pedal-steel and acoustic guitar player for Stars Like Fleas. As we walked up the same path later, the radios were picking up a live transmission of the band. The sounds from different boom-boxes pulled us in conflicting directions: The music is happening here—no, here. From between two radios, we could only hear the forest.

At the top of the hill, the group’s instruments were set amidst sporadic rain. Ryan Smith, who plays piano, synthesizer, keyboard, glockenspiel, melodica, toys, laptop, and other electronic ephemera, attached an umbrella to Shelley Burgon’s harp, creating the appearance of a Victorian landscape. A few minutes after the performance began, Knott arrived from the trail, cloaked in a mosquito net hat and carrying a nineteenth-century Persian bell, and paced among the group as he began to sound words. The twigs snapped beneath his feet. The sound was the woods, and Stars Like Fleas was what they contributed to it, with bows gliding over guitars, and wind chimes dangling from a cello, until they suddenly stopped to let the branches under each person crack and the crows, circling above, make their sound. This moment of silence ended when Knott started singing again, when he felt they had listened long enough and he started to respond. Later, percussionist Ryan Sawyer waved his arms in the air as a conductor would do, and all the group began to sing. 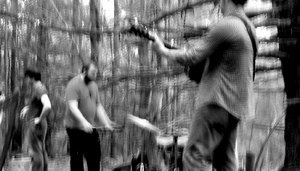 The way Stars Like Fleas experiment with traditions (and the way they play acoustically under large trees in the woods) leads some to call them avant-folk. Perhaps folk can be defined as music that comes from the present; now the banjos, fiddles, and guitars mingle with samples and manipulated soundscapes. As with bands like the Books, or Arab Strap, Stars Like Fleas work with what they know, to make songs that sound like us, in this decade.

On a recent evening, we met with Knott, Smith, Fields, and cellist Tianna Kennedy at Monkey Town, Knott’s restaurant and video performance space on North 3rd Street. Knott, also a video artist, opened a discussion about the title The Ken Burns Effect, by pointing out that one can purchase a plug-in for the editing program Final Cut Pro that applies the Ken Burns effect (an effect in documentaries where the camera zooms in or out on a photo to add drama). We joke about the band using different forms of music in the same way.

“That’s essentially what our album is about,” laughs Montgomery. “It’s like, how do you work with all those genres that have existed for so many years, and have their own baggages—they’re extinct. There’s no such thing as the blues anymore.”

Montgomery agrees: “You’re just taking all those grammars and applying them in your own way.”

During sets, which typically run under forty minutes, the band is constantly playing; there are no moments to clap, and transitions to songs are filled with sound, which allows the audience to suspend a desire to pinpoint the band—or even a particular song—to one genre or another.

Knott’s lyric process has evolved since the last album, perhaps because of increased dialogue with the music. Previous lyrics came from a more isolated place, in that he worked within his own space, responding and improvising along with his own words in overdubs, as he listened to sessions. Now, since the songs are recorded live, he interacts more directly. Knott explained: “It’s funny; I used to think that I was deficient in lyric writing, but I’ve become more used to my own method. I’ve heard David Byrne wrote his lyrics like this, or Frank Black—they wrote their own lyrics by mumbling melodies over whatever the jam is, that the band is coming up with, which is essentially my method.” 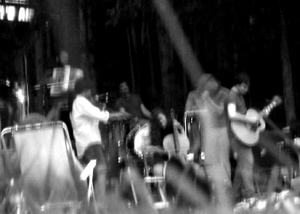 This new level of dialogue also coincides with his more accessible language and form. While still working with universal themes, like girlfriends and relationships, he now draws his internal abstractions with more specific concepts: “In the past I was concerned, and this is a mistake, with big words and important words. Now I want as simple words as possible, to convey an almost generic meaning that can be applied to as many people and experiences as possible. And then to have those three or four juicy lines in a song that convey the meaning of the song or offer clues—in the case of Ken Burns, it’s a fantasy about Andrea Zittel.”

He went on to relate his own ideas about constructed environments, in terms of his design of Monkey Town, to the concepts of Zittel’s art, in terms of the way the restaurant design scrambles visitors’ standard preconceptions. “Artists should have a chance to fail, and some of her stuff I don’t think really works, but I like that she’s building environments.” Ryan Sawyer’s studio, behind a gallery space on North 8th, is lined with records, books, and framed artwork. As he packed up drums for a later gig, he suggested a greater impression of the group’s objective: “We’re looking to create a template for social constructivism.”

We were talking about the Clash, who drove at a social construct through politics. If the Clash were about creating a social construct in the field of political activism, Stars like Fleas are about presenting new possibilities in traditions of music.

“It seems impossible,” says Sawyer. “It’s a paradox, to create a social construct or collective with nine-plus musicians who are all so brilliant and accomplished in their own regard, and who come from so many different directions.”

Sam Amidon’s contribution was the shape note singing. The group cites Alan Lomax’s Sacred Harp recordings as an early influence, but it was Amidon, who joined the group last year with the fiddle and banjo, who suggested the band sing them. The use of shape notes reflect the band’s willingness to test limitations. “I thought they would fit perfectly with the band,” says Amidon. “These songs are sort of like covers, even though the words are changed or left out; but we’re doing something unique here.”

As Ryan has it, the only way to construct is to tease with the moment of collapse, to test the limits and play up to the moment where everything might truly fall apart. It’s like looking up at a sky ever-heavy with rain, about to crush a ground layered with instruments, holding out for those last moments before a storm.

Before we left, Ryan opened a book for us, about Charles Gayle to a quote from Irving Stone: “This is as far as music can go to be beautiful.”

Stars Like Fleas’ first record, took the ass for a drive, which was never officially released, will be released digitally on September 12th by Touch and Go/File 13. Stars Like Fleas play with Dirty Projectors and Grizzly Bear at the Bowery Ballroom on September 26.

Emerging in 2002 with Elaborations of Carbon, YOB mined the sub-genre of doom metal, with Mike Scheidt’s lyrics frequently indecipherable, his voice ranging from a whispery snarl to a trebly howl to a demonic roar.

DAVID AUSTEN:
the stars above the ocean the ocean beneath the stars

For his first solo exhibition in the United States, London-based artist David Austen presents film, painting, watercolor, and collage made over the period of a decade.

There is a common trope in Broadway musicals where characters who are separated by space and time, or who had been up to this moment, converge upon a common point for the onset of a certain happening. This happening is usually the main event around which the musical’s plot is centered (think “Tonight” in West Side Story, or “One Day More” in Les Miserables). It is worth noting that the unfolding of the plot after this point in the musical is usually underwhelming and feels excessively long to the audience.

Silence As Instrument Too

Sarah Passino's most recent work has appeared in DIAGRAM, Poetry Daily, and Boston Review's collection What Nature. She has poems forthcoming in Berkeley Poetry Review and in Capital and Ritual, a collaborative anthology by Wendy's Subway and the Bard Graduate Center. She received the Rachel Wetzsteon Poetry Prize from the 92nd Street Y and was a 2018 Poets House Fellow.