1974 was the year Bowie got into Burroughs, dyed his hair red, and recorded Diamond Dogs. He’d initially wanted to turn George Orwell’s dystopic novel 1984 into a musical, but when Orwell’s widow refused him the rights Bowie decided to scrap the idea (thank god). Still, the theme of coercive televisual propaganda fits nicely enough into our current political climate to make this reissue’s link with Orwell queasily appropriate. 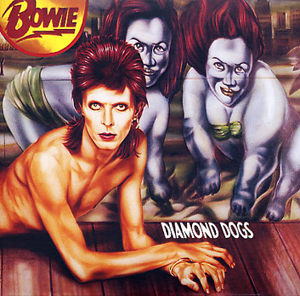 The fat booklet included with the two-CD set (a second disc for the routine excavation of outtakes, alternate versions, rarities, etc.) features Bowie’s own amazing description of the concept behind the record:

I had in my mind this kind of half Wild Boys, half 1984 world, and there were these ragamuffins, but they were a bit more violent than ragamuffins…They’d taken over this barren city, this city that had fallen apart. They’d been able to break into windows of jewelers and things, so they’d dressed themselves up in fur and diamonds. But they had snaggle-teeth, really filthy, kind of like violent Oliver Twists…They were living on the tops of buildings…They were little Johnny Rottens and Sid Viciouses, really. And in my mind there were no means of transport, so they were all rolling around on roller skates, with huge wheels on them, which squeaked because they hadn’t been oiled properly. So there were these gangs of squeaking, roller-skating, vicious hoods, with bowie knives and furs on, and they were all skinny because they hadn’t eaten enough, and they all had funny-colored hair.

Feral glitz, futuristic urchins, proto-punk Dickensian squalor, and post-apocalyptic nomadism: all part of the ongoing self-fashioning of the world’s cleverest pop star. To get a sense of Bowie’s superhuman imaginativeness around this period—fresh after morphing through the cosmic insectism of Ziggy Stardust, the angular glitter rock of Aladdin Sane, and the impeccably curated cover-versions of Pin Ups—compare Dogs to Marc Bolan’s attempt, also in 1974, to graduate from teen dream to heavy conceptualist. He cut the extravagant dud Zink Alloy and the Riders of Tomorrow, a record that sounds like The Slider’s timeless boogie shoe-horned into a space suit.

The first thing you hear when you cue up Diamond Dogs is a sound like an air-raid siren crossed with a werewolf, followed by the (slightly hokey) spoken-word bit that puts the post-apocalyptic mise en scÃ¨ne in place. Bowie then launches into the title track with the disturbing provocation, “This ain’t rock and roll, it’s genocide”—a good example of his gift for attention-getting. (Like Burroughs, Bowie is able to be both dark and delirious: “As they pulled you out of the oxygen tent/You asked for the latest party/With your silicone hump and your ten-inch stump/Dressed like a priest you was/Tod Browning’s freak you was.”) After the luxuriant and stagy “Sweet Thing,” the Shaft-like “1984” seems to anticipate the coked-up soul just around the corner on Young Americans. And the big single “Rebel, Rebel,” which vies with “Day Tripper,” “You Really Got Me,” “Satisfaction,” and “Superstition” for Greatest Riff of All Time, could be Bowie’s coolest song (one would also have to consider “Queen Bitch,” “Drive-In Saturday,” “TVC15,” “Joe the Lion,” and “Ashes to Ashes”). Rather than half-heard in an East Village tavern between “You Can’t Always Get What You Want” and “Sunday Girl,” it’s refreshing to hear “Rebel, Rebel” nestled between the reprise of “Sweet Thing” and the gaudy “Rock and Roll with Me,” making it sound like the sexy gem at the center of a spastic collage.

The record comes to a close with the exciting and odd “Chant of the Ever Circling Skeletal Family,” which, with its lopsided time-scheme and bare-bones arrangement, sounds almost proto–Pink Flag (I once saw Bowie in eager attendance at a Wire gig in NYC).

Diamond Dogs is a transitional record. Where Ziggy sounds strident, DD sounds patchworked. Or, to reverse the chronology, if Let’s Dance, with its Reagan-era gated snare drum (grace Ã  la chic desk-wiz Nile Rogers, who was also busy airbrushing Like a Virgin at the time) sounds cut from solid blocks, Dogs is as fractured-sounding as the junk-strewn urban war zone it takes as its backdrop. This isn’t a bad thing—it’s part of what’s really fun about the record—but it shows Bowie between moves, rather than delivering a finished piece. And while we’re at it, let’s divide up the recorded output from 1973–1983 into the definitive statements: Hunky Dory, Ziggy Stardust, Young Americans, Station to Station, Let’s Dance; and the intermediate transitions: Aladdin Sane, Diamond Dogs, Scary Monsters; with a third division set aside for the two years of unbroken experimentation with Eno: Low, Heroes, and Lodger (saying these three records deserve their own category just isn’t saying enough). The most dramatic leap would then be from ’73 to ’75, as if the Ziggy persona were so absorbing it took the partial alien Aladdin and the darker sci-fi of DD to jumpstart the bionic soul brother of Young Americans.

Among the many curiosities on disc two of the reissue are the K-Tel version of “Diamond Dogs” and something forbiddingly titled “Rebel, Rebel (2003)” (which we’ll not discuss). There is also Bowie’s cover of Bruce Springsteen’s early effort at Dylanish picaresque, “Growin’ Up.” In Bowie’s hands, the Boss’s scrappy underdog allegory becomes something much more campy, but also shows the continuity between songwriters as diverse as Dylan, Bowie, and Springsteen, who (along with Village Green–era Ray Davies and Bryan Ferry’s tales of dissolute global flÃ¢neurie), account for the best rock verse there is.

After Tommy, Jesus Christ Superstar, Godspell, and Hair, it made sense, in 1974, to want to use rock to amplify up all sorts of already inflated concepts. That Bowie was channeling The Wild Boys and 1984, rather than the Gospels or hippie mythology, means that he was both edgier and weirder, and that his futurism was more suited to the era of the music video that he continually anticipated, right up to the dawning of MTV in 1981 (at which point he triumphantly entered the medium as if he’d been there all along). And if the hegemony of the image as the preferred unit of global consumption has made Orwell’s tele-totalitarianism more than just scarily relevant political allegory, it also cuts across Bowie’s career at a telling diagonal, as if he were (again like Burroughs) more a prophetic antenna than a poised auteur. Alas, when Bowie sings, on a track left over from the abandoned musical,

—does he not seem simultaneously to be calling out to Ronald Reagan, Martha Quinn, Yoda, Bill O’Reilly, Oprah, Stephen Colbert and the whole image-fueled fear machine of our own current dystopia?

Paul Grimstad's songs and original scores are featured most recently in the films, Happy Christmas (2014), The Vanquishing of the Witch Baba Yaga (2014), and Stinking Heaven

Luigi Ghirri: The Idea of Building

The exhibition is curated by the artist Matt Connors, and comprises 29 vintage prints together with archival material, handmade exhibition invitations, books, commercial work, presented in vitrines. The title of the exhibition is taken from a text by Ghirri’s widow, Paola Ghirri, in which she describes his attitude to not only printing—each print is handmade and unique—but also to his construction of images and fascination with hand-built objects. The photographs, usually taken frontally, have often been taken for montages, when in fact the various parts of the composition existed in place out in the world already, and are simply framed by Ghirri using the photograph’s own rectangular limit.

Reflections on Climate as Keyword and Shape-Shifting Noun

What does “climate” mean? Professor Jim Fleming argues that it deserves to be a keyword in the vocabulary of culture and society.

The first hair I found was between the pages of a magazine ruelled between the mattress and the wall. It had to be hers; my own hair stops at the shoulders.

By Viviane A. Pistache

Dressed in a white coat, with blue eyes and authority the so-called Doctor certified: the woman had a Grandma the Portuguese would round up by lasso, the savage cabocla, a real bugre.