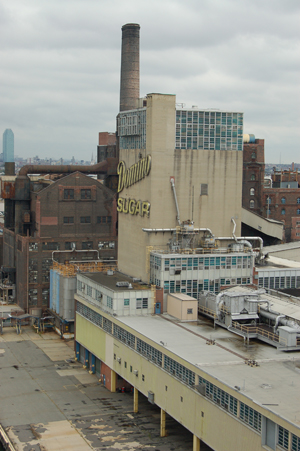 When it was purchased in 2004 for just $55,831,875, the sugar refinery was still in operation, and it remained so for about a year, leasing the space from its new owner. Today the developer, Community Preservation Corporation Resources, Inc. (CPCR), is seeking a zoning change for the unused space, similar to that which was approved farther north on the waterfront. The developer’s intent is to construct an enormous mixed-use complex and incorporate the least amount of historic preservation for which it can lobby successfully. This could allow as much as 1.8 million more square feet to be constructed in the low-rise, mixed-use residential neighborhood. However, informed community members may still be the key to making a difference in this instance, as they have in other places in the City.

The financing for the property is complicated. The first mortgage was made by the nonprofit Community Preservation Corporation, a consortium of banks with expertise in real estate development, to its for-profit subsidiary, CPCR. Isaac Katan—the Brooklyn mega-developer lately embroiled in controversy for bringing another many-storied building to Park Slope—backed the loan; he may have paid the bulk of the down payment as well. (Construction of his latest building on 15th Street in Park Slope has been successfully stopped by a neighborhood advocacy group).

On June 27, 2006, the Brooklyn Community Board 1 Zoning Committee asked Michael Lapin, president of CPCR, to present plans for the factory at its public meeting, which was attended by an overflowing crowd. Instead of honoring the request, Lapin said that there were no plans to present, and that the developer was waiting for the completion of historic preservation and structural studies from consultants, including Robert Silman Associates, before presenting CPCR’s approach.

Lloyd Kaplan, a public relations spokesman for CPCR, said in July that there were no plans. “It’s like shoveling fog,” he insisted. Upon being presented with information to the contrary—that, in fact, architectural plans do exist—Kaplan recapitulated and said of the architects, “From day one they’re sketching on napkins. They’ve gone through a lot of napkins.”

Elaborate working plans and models for a scheme for the Domino development have been in Rafael Viñoly Architects’ studio since September 2005, and by January 2006 the model looked as if it belonged in a museum: four gigantic proposed towers of approximately forty stories replace the Domino Sugar Factory buildings as we know them, with little if any preservation of the existing 19th century Victorian brick buildings, nor of the modernist “bin structure” with glass on top. The renderings and the model make the preferences of the developer clear: bulk, massing, and the formation of a high-rise sculptural “curtain” next to the low-rise residential buildings of existing property owners. Very little concern for historic preservation was indicated at the time. The model was already so seductive that it looked like a done deal.

So why would the developer not honor the Community Board’s request? Rudy Bryant, associate director of the Pratt Institute of Community Economic Development, said: “I can speculate that they’re trying to work some kind of deal behind the scenes, like a zoning bonus or a housing subsidy. If they’re trying to get a zoning change for the site their architect’s plans are dependant on the zoning until they’re clear what kind of zoning they have. They probably don’t have to put an image out there. They probably don’t want people to oppose the project.”

Howard Slotkin, a planner in the City Planning Commission, said that while there are no rules put forth to prevent developers from showing progress plans to the public, it is common among developers not to show such plans while they’re still being vetted with the Commissioners.

But the developers are surely not sitting around waiting for the bureaucracy to turn its wheels while they pay hundreds of thousands of dollars in carrying costs. They are cooking behind the scenes with the most professional chefs money can buy. They seek support from elected officials, commissioners in City Planning, and community stakeholders. When they finally reveal “the Plans” to those who weren’t involved behind the scenes, these appear to be a fait accompli.

As Stephanie Eisenberg, developer of the Esquire Building one block from the Domino site, said, “The developer doesn’t want the community to comment. They aren’t paying interest on a $31,000,000 mortgage without moving the project along. They’re not going to sit and wait for three years for the community [to consider their plans and come to an agreement]. They say they are, to get the community off their backs. Once they get their zoning they don’t talk to the community.”

“Community Preservation Corporation doesn’t care about this community,” said Eisenberg. “I believe they are using their non-profit status to further their for-profit venture.” 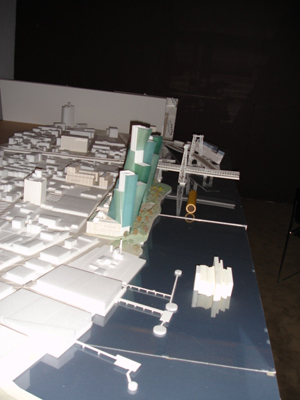 CPCR has met with several community groups including Churches United, United Jewish Organizations, Neighbors Against Garbage, People’s Firehouse, Los Sures and St. Nicholas, but the developer has not presented the plans for the site to any of those groups. One community activist called CPCR a “good listener” but said the developer is not giving the community specifics; there have been no concrete responses as to the scope of work.

So how can the community participate in the planning process in a meaningful way? When a developer makes a zoning proposal to change the city zoning map, it must go through the Uniform Land Review Procedure, aka the ULURP process, which was created by city charter in 1975. Part of the process is a public scoping meeting.

Heather Roslund, one of the architects who created studies of a “lesser-build” alternative plan to the city’s zoning proposal for Greenpoint and Williamsburg, said that given the current process, what people can do is to respond to the developer’s Scope of Work as outlined in the Environmental Impact Statement, either publicly during the scoping hearing or by mail. Topics upon which people can comment include: socioeconomic conditions, shadows, historic resources, neighborhood character, natural resources, hazardous materials, infrastructure, sanitation, energy, traffic, parking, transit, pedestrians, air quality, noise, construction impact and public health.

Roslund says that developers appear to play by the rules, but they have meeting upon meeting with community groups that seem to be reduced to mere formalities. Developers have learned how to manipulate the rules of the city charter to their advantage. A David and Goliath situation takes place, she says, in which the resources of the developer include “at least 50 people working on the proposal and hundreds of thousands of dollars to invest,” while the community remains largely dependant on pro bono efforts. If the city were to fund the community planning process, as Roslund suggests, communities could respond to zoning proposals in a responsible timeframe.

Michael Kreigh, chair of the ULURP committee on CB1, suggested that developers seeking community support might—to demonstrate good will—offer their political connections or expertise with the zoning process to community groups starved for such resources. Perhaps a little transparency might lessen the outrage and hopelessness that leads to the protests and lawsuits which prevent developers from obtaining city approvals.

In Hells Kitchen recently, community advocacy groups were able to have input in how the Javits Center is being expanded. They also brought a flea market to the area and created parks and community gardens and plans for Pier 76. In 2003, the Throgs Neck Homeowners’ Association was successful in reducing the developable area that can contribute to density on the waterfront. South Park Slope Community Group accomplished a down-zoning of their neighborhood, partly in response to the proposed plans of Isaac Katan. In both Throgs Neck and Park Slope, the precedents successfully argued that the proposed new development “threatened the low-rise residential character of the neighborhood.”

In Williamsburg, landmark advocacy groups—the Waterfront Preservation Alliance, the Municipal Arts Society and the Landmarks Conservancy—are doggedly pursuing a landmarks designation for all or part of the twelve-odd buildings on the Domino site. The groups’ postcard and email campaign to Chairman Robert Tierney of the NYC Landmarks Commission has already garnered hundreds of responses from community members and seeks thousands more.

The CPCR said it is waiting for the results of the historical and structural studies prior to revealing the scope of work publicly. However, the results of the studies are not as important as the interpretation of the studies’ results. For instance, let’s imagine that highly regarded consultants state that the Domino buildings could be renovated into residential units without compromising historical significance or creating undue expense. Architects have already told the Municipal Arts Society as much.

Churches United, a group of Catholic churches, sent a letter to CB1 in July stating that the group doesn’t support incorporating a preservation component in the Domino development if it reduces the amount of affordable housing to be incorporated. Hence, one of the most sensitive issues of the neighborhood is becoming its Achilles heel, potentially threatening the character of the historic building and the character and identity of the neighborhood itself. The community’s concerns of providing and maintaining affordable housing, job preservation and waterfront revitalization are being treated like bargaining chips for trade-offs such as a higher density development.

Landmarking does not advocate for any particular use—one local organization has inquired about purchasing Domino to develop it for manufacturing. A Landmarks designation could allow for historic re-use akin to the renovation of the Bankside power plant into the Tate Modern on the south bank of the Thames in London—a project that strengthened and stabilized its immediate neighborhood with the creation of the most visited museum in the world. Such a use would be permissible in a light manufacturing zone in Brooklyn. However, the purchaser of Bankside was a cultural institution. In this case the private property of Domino is owned by a developer with experience in residential development.

It is a truism to state that most of the real estate development process in New York City goes on behind closed doors. Given the enormous difficulty of obtaining approvals for construction and zoning proposals, and the sense of aggressive entitlement which New Yorkers can have about anything that seems to be in the “public realm,” one can hardly fault developers for not offering any more information than they are legally required to do¬—even though the secrecy is at taxpayers’ expense. But might more transparency benefit the success of their projects as well as the neighborhood?

A group of civic leaders are petitioning for greater transparency in the New York City Parks Department. Might such an approach be appropriate for City Planning?

Leah Kreger is an architect and a writer who lives close to Domino.