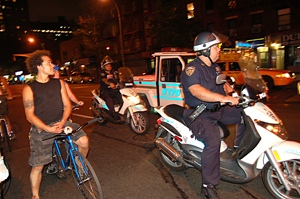 Critical Mass in Manhattan on August 25 kicked off much like similar rides in Paris, Japan, San Francisco or Brooklyn. About 150 cyclists gathered in Union Square to the sounds of marching band music, uniformed dancers and a speech marking the anniversary of Hurricane Katrina. About five minutes into the ride, it seemed to be more of a memorial to the First Amendment right to free assembly than a celebration. The ride was quickly halved in number as phalanxes of cops rode into the group on spanking new mini scooters, grabbed people from their bikes and…. gave them traffic tickets.

“We’ve been doing this ride for over a decade with little trouble from law enforcement, the way it still is in Brooklyn,” says Robert Plouma, a volunteer at the Times Up bicycle resource center. “Then, during the RNC, cops were looking to quell dissent, even though what we do, besides running red lights, isn’t illegal and it isn’t a protest. For a while, about a dozen or more people were arrested at every month’s ride, until a trial went down in February. A judge ruled that the ‘parade regulations’ [now used to classify the event as illegal] were too vague. Since then, they’ve only been ticketing. They grab people in groups, and then confer afterwards on what ticket to hand down, which is totally illegal. Cops are supposed to enforce the law, not take people down because some chief doesn’t personally approve of the event, and then decide what to charge them with.”

Curtis Andersen received just this kind of attention on Friday‘s ride. He rides with a bell, reflectors, and a helmet. “I was alone on the street and was stopped by fifteen cops, all looking for something to give me a ticket for. I have reflectors, front and back lights, but my back light was hooked to my pants [a common practice on mountain bikes, which lack mounts].” So Andersen was ticketed for riding without a rear light affixed to his bike.

But what does this all mean for people who don’t spend Friday nights tooling around on bicycles in search of danger and agro cops? Plenty, according to speakers present at a recent emergency meeting at St. Mark’s Church. Figures including city councilman Alan Jay Gerson and leading civil rights attorney Norman Siegel painted a gloomy picture for the future of civil liberties if a precedent is set that enables the police department, as opposed to legislators, to decide which public gatherings are to be allowed.

“The New York city police department plans to expand its control over protest activity by labeling many common street and sidewalk uses as a ‘parade,’” reads a flier produced for the meeting. “If put into effect, the NYPD’s new rules will greatly suppress the right to assembly and expose…people to arrest for things as simple as crossing the street against the light. The NYPD is re-writing these laws while the city council and many New Yorkers are on vacation.”

“This is a tough one, and we can’t capitulate when cops are using such obviously oppressive tactics,” says cyclist and legal observer Madeline Nelson. “A videographer was jut hit by a cab during the ride and the cops were down the road giving someone a ticket for not having a bike light. [NYPD Commissioner] Ray Kelly has been on a paranoid crackdown since 9/11. He bought this fleet of scooters with federal antiterrorism money, and they’re being deployed here, handing out tickets to cyclists, while the midtown tunnel, a real potential terrorist target, was attended by only a couple of cops.” Nelson has spent months fighting tickets for real and invented infractions that she has incurred while asserting her right to ride with Critical Mass over the last year.

Many riders were confused by the fact that the NYPD had announced a hearing to clarify its “parade regulations,” only to cancel it two days before the event. When approached, officers present told me that I would be arrested for having a press ID that they did not recognize. A later meeting with a Brooklyn police officer provided much more candid information.

“It would be great for people to come to us for permission to parade in the streets,” said the officer on condition of anonymity. “But [ultimately], it’s the desk cops that decide who gets ticketed. One day, they say ‘these [infractions] are being prioritized, you gotta get people for this today,’ even though another day, they’re no big deal. You don’t like it, you gotta keep your mouth shut, or it’s three months with no vacation time.”

So how does a beat cop feel about being in the middle of all this politicking? “You guys should register your event with the police,” says my confidant, who’s from Brooklyn. “But I don’t really care,” he explains. “I need the overtime salary. I got $19,000 a year in bills, and I’m not clearing $40,000 in pay. A demo to me just means more overtime.”

reZz is a freelance writer and photographer.