Edward Norton usually looks pissed off, or as if he regards everyone else as a fool. Where Meryl Streep has a gift for crying while appearing to be trying hard not to cry, Norton’s rare moments of affection are leavened by a touching wariness, a disbelief that someone has penetrated his armor of pessimism and contempt. When Norton isn’t playing a credible Uebermensch, his arrogance can be way off-putting. But when his brazen sense of superiority finds a parallel in a character’s worthiness, Norton’s irritating qualities somehow reverse and he generates a profound rooting interest. You’d like him to prevail; maybe for once quality might actually triumph.

Norton is definitely our hero in The Illusionist, but he is not presented as a one-eyed man in a kingdom of the blind. It’s a measure of the screenplay’s subtlety (and subtle melodrama requires a script full of nuances that aren’t too nuanced for us to miss) that Norton play an intelligent man in a society of other smart guys. Neither of the villains in the piece is a dumbass. Rufus Sewell plays a psychotic and Paul Giamatti a conflicted semi-admirer, but both have brains and are Norton’s equal when it comes to articulation. Indeed, they rely more on words, while Norton communicates by charismatically furrowing his brow.

As melodramas require, the heroine, Jessica Biel, appears as a font of soul and femininity; her brains are neither here nor there. Biel’s integrity (in another cinematic era it would be her virginity) bespeaks her worthiness, just as Norton’s bulletproof self-regard serves as proof of his incorruptibility. Their high moral tone makes them perfect for one another. Other suitors violate the natural order. Yet the trade pursued by Norton’s character, his identity, is messing with that natural order: fooling folks. As a magician he survives by convincing them—and us—that the apparently unreal has substance. 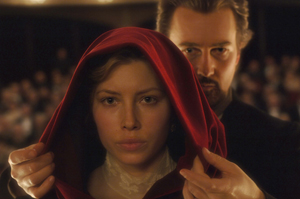 In The Illusionist, Edward Norton is our hero, Jessica Biel a post-verbal confection.

Director Neil Burger has a parallel task. He must suffuse this fairy tale with sufficient interior and exterior detail to be credible, even gripping. And that detail has to distract us—at least until we’re an hour out of the theatre—from the plot’s (minor) irreconcilabilities and cute tricks. That Burger succeeds, and does so with such sophisticated awareness of the nuances of movie-making, is an astonishing feat.

The Illusionist is absurdly enveloping and satisfying, rendered with beauty and originality, never dull, never full of shit, credible 90 percent of the time, in spite of its subject matter, and rigorous in maintaining a self-aware tone of high-minded craft. When Burger chooses to emphasize a detail of mise-en-scene, like his scene-opening tracking close-up of Norton’s bespoke shoes gliding across a gas-lit stage, that detail illuminates a dramatic whole present both on the screen and already formed in our heads. Burger sets the brain/style/visuals bar high from the jump, and his insistence on quality requires that we pay attention to, and learn from, the resonant details.

If you see a shitload of movies (because you’d rather do that than almost anything else), you probably haven’t lost your ability to suspend disbelief. In fact, you probably sit there when the lights go down fucking praying to have your disbelief suspended. Or more accurately: first you pray not to be insulted, and if that small wish is granted, then you up the ante. You yearn to be taken in, seduced, separated from your too-informed cineaste’s self-consciousness and to lose yourself in a story. But if you see a shitload of movies, the only stories that can take you in are those told with deliberate, highly evolved style. Style so interwoven with the story that you can’t tell warp from woof.

These days, that sort of style generally takes the form of overdeveloped self-consciousness (the Tarantino Syndrome) or arty narrative-fracturing (the Godard Effect). To find an original story well-told through a clear love of cinema itself, told by a director with the chops to demonstrate his savoring of the medium but not get in the way of the tale, is some satisfying shit indeed. The Illusionist satisfies on every level.

Like Norton’s character, the film refuses the seductions of mediocrity, insisting on elegant presentation and believing in an intelligent audience that wants to pay attention. There were clearly many opportunities in the writing and production to choose a less subtle, more accessible approach. Burger never does. The Illusionist, for that reason and others, is going to remain a film worth enjoying again and again.

Themes? With all those costumes, weird goings-on and moonlit shadows, there must be some heavy-duty metaphors ‘n’ stuff in here someplace, but I never found ’em. Burger utilizes archetypes—a Magician, an Evil Prince, a Fair Damsel, a Good Uncle—but they are narrative elements in a narrative-driven tale. This is a movie movie, a ripping yarn, a story told for its own sake, in a land real enough for us to be vested in its workings and foreign enough to remain mysterious and alluring.

The Illusionist is what the execrable, unwatchable M. Night Shyamalan would kill to accomplish. Imagine a Shyamalan film of wit and credible fantasy, grounded in art cinema instead of commercial hackdom, with genuine suspense, an O. Henry ending that pays off like O. Henry and… can’t do it, can you? Neither can I, so never mind. A more apt comparison might be to The Triplets of Belleville, a gentle masterpiece that created its own universe, recognizable but unreal, that followed its own laws and mores, which we savored learning. Like The Illusionist, Triplets’ foremost creation was the experience of absorption into its own singular identity.

The Illusionist’s production design showcases the care a medium-budget film can expend if it’s shot in Prague. Burger understands the iconic power of his locations (this is a literary film, a novelistic telling wherein the buildings function as characters, too): a splendid gas-lit opera house, a grubby gas-lit theater, a hallway lined with trophy antlers that remind all who walk beneath them how easily their own heads might hang on the wall, a homey layer cake of a house filled with well-worn tools, a magical forest, several clip-clopping horse-drawn carriages. The monochrome clothes, all long coats and hats carefully reflecting precise class position, evoke the past but also let the actors dominate their costumes. The completely modern Philip Glass score somehow suits the era, and furthers the darker undercurrents of the story. Every now and then Glass adds too much orchestral embellishment or swells upward in that Glassian trope; he understates and then reminds us he’s doing so.

Burger’s attention to nuance is revealed as much in the performances as in the mise-en-scene. Paul Giamatti retains his air of harried, distracted 21st-century urban neurosis; it plays shockingly well in late-19th-century Vienna. Ditto Norton’s usually streetwise snappishness. Their gestures, tone, and diction suit the world of Vienna before the deluge. Both illusionist and police inspector function with a circumspection required by the concentric rings of power surrounding them.

Norton’s occasional gestures of hubris comment upon this circumscribed world. Aware of his role in that society, he never pushes too far. Neither does Giamatti. Both remain aware of the stakes at play. Biel, who grew up on TV’s Seventh Heaven and pouted in her underwear so fetchingly (while sucking her thumb) in The Rules of Attraction, holds her own with Norton and Giamatti. They have words or furrowed foreheads; Biel is post-verbal, a confection. Though she might share the frame, Biel inhabits another universe—the timeless cinematic space of the ethereal semi-Hitchcock blonde. She wears her Victorian clothes with a suppressed sexuality that only underscores her unattainability. When she takes ’em off for a Don’t Look Now-evoking love scene, Biel (or her body double) retains her dignified ethereality. This was not exactly the case in Rules of Attraction.

Everybody kind of picks their own accent. Giamatti sounds more or less Viennese, Norton like an American actor going vaguely Euro, and Biel like Uma Thurman attempting Henry James, that is, like an American mimicking the high Shakespearean tones of the Royal Academy of Dramatic Arts. Rufus Sewell, playing a prince complete with Snively Whiplash mustache (which seems maladjusted in a scene or two), gets to talk like what he already is: a British guy at ease doing carefully nuanced Continental. Yet these slightly clashing accents are not all that off-putting. They form another detail, and suggest—intentionally or not—the class and background differences of the characters. Or maybe they do clash a bit, but the story’s so seductive it’s hard to care.

An hour out of the theater and you may be annoyed at a few moves, a few twists that could have easily been revealed but weren’t because, simply put, the story cheats. Since The Illusionist deals in illusion, Burger gets to pretend that inexplicable stage-craft has a greater inherent magic than movie special effects. That is one illusion that does not linger.

In Become Gift, Sky Become Shadow a surreal atmosphere of anticipation connects two works that examine cultural myth and personal trauma. Through a combination of theatricality and subtle detail, Bradford Kessler contrasts the generic and fictitious nature of popular history with the textures and temporalities of subjective memory.

An Ecstasy of Parting

“An Ecstasy of Parting,” by Meryl Branch-McTiernan draws its title from an Emily Dickinson poem, and like the poem tackles a dark subject at its heart. When we meet the main character, he’s waking up to the aftermath of an alcohol-fueled argument with his wife. We watch as he tries to redeem himself and regain control of the life he’s made for himself through a nostalgia-driven trip to the beach with his young daughter. Branch-McTiernan smoothly alternates the tone of the story between moments of existential dread, tenderness, and humor.

A dominant strategy for the three artists pits decorative symmetry against the dynamic patterns of living forms.

Yasi Alipour speaks with Allison Janae Hamilton about her performance work, her family legacies, and her affection for swamp country as the artist prepares for her debut solo exhibition at Marianne Boesky Gallery.