In The Descent, British director Neil Marshall (who also made the amazing Dog Soldiers) creates a seductive and terrifying universe of Jungian archetypes, traditional horror stereotypes, and bald, disarming, and haunting metaphoric struggles.

The cave in which the film’s action occurs is a coherent if unlikely place, populated entirely by hot and powerful women and slimy sub-humanoid cannibals. The outside world, it’s suggested, though less cannibal-friendly, is even more dangerous.

The film quickly announces that this is a universe where pain is paramount. It opens on a trio of women, Sarah, Juno, and Beth, whitewater rafting down a treacherous stretch of river in Scotland as a man and young girl look on. The three women’s arrogant stupidity is plain, but they don’t die in the Scottish river. On land, they greet the man and girl: Sarah’s husband, Paul, and their daughter. 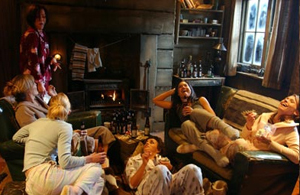 The Descent’s pajama party: These are the girls your mother warned you about. Â© Lions Gate Films

The triumph over the river is tainted by the way Paul’s attention focuses on Juno rather than Sarah. Rather than admit the obvious—that Paul and Juno are lovers—Sarah, seething and pouting, uses the will of her denial to summon a car accident (one of the best ever filmed) that kills her husband and daughter, destroying any evidence that their marriage is imperfect. The set-up is a strong indication of the film’s major theme: our tendency toward self-sabotage through willful blindness.

Sarah’s all-powerful blindness makes her incapable of recognizing Juno’s rage toward her. It also freezes her self-image in time, so she does not think that perhaps witnessing the perils of the everyday might make exploring dark, dangerous caves less thrilling. A year after the accident, Sarah, her best friend Beth, and a number of women who missed the last adventure take Juno up on her offer to vacation in the United States and go caving in North Carolina.

The women meet at a creepy cabin in the woods and the film meanders into a stilted sleepover scene. During the exposition (one of the women is training to be a doctor, two are sisters, and one is too green to be attempting anything as hazardous as this outing) it becomes really obvious that the film was written by a man. Here is a crew of extreme-sport-loving, high-achieving women, and when they get together they talk about babies and giggle: think The Big Chill or, even more closely, Now and Then starring Demi Moore and Rosie O’Donnell. The scene is terrible, treacly, and overly long. Nevertheless, it’s useful. Because even though Marshall has no idea how women actually interact, he does clearly signpost that these really are women, and not just female actors in leading-man roles. The latter is what horror and action films have been showing for decades. Linda Hamilton in Terminator II, Sigourney Weaver in the Alien films, even former model Milla Jovovich in Resident Evil were all playing drag.

By contrast, Marshall’s cast is a decided step away from that characterization. They have integrated the animus (the male self which Jung asserts lives within the female) and don’t need to either ape men or chase them. Now that they take their power for granted, as men generally do, they play out the stereotypical stupidities that men exhibit on screen time and again. Strong and capable, they lose the good sense to avoid creepy Appalachian back roads and the woods around them.

However, they’re not quite as stupid as most leading men in horror films. (Of course, neither were the men in Marshall’s Dog Soldiers—he doesn’t go for stupid.) They think they know what they are getting into; Juno, their American friend, has arranged and researched the adventure they have flown from Europe to North Carolina to experience. But Juno lies and, like her powerful, capricious, and cruel mythical counterpart, she toys with these women because she can. She tricks them into an uncharted cave system and never lets on until it is way too late. The ugly American, she personifies the U.S.’s current geopolitical maneuvers, at least as seen through the eyes of The Descent’s British director. She’s a selfish bully who tricks her European allies into a fight they can’t win, against a savage civilization that was happy to leave us alone until we started poking at it with sticks.

In the film, the savages are a break-off species of subsistence hunters, people who went underground and evolved so well that they never came up again. They pick off and eat any human or non-human animal foolish enough to enter the cave, but there’s no indication that they’re evil. They’re just hungry, hungry humanoids. They look like Gollum from Lord of the Rings, they look like Astro-Zombies wearing pancake makeup, they look like the army of undead that Buffy the Vampire Slayer had to fight in the series finale. They’re CGI-free, each played by an actor covered in a thin layer of slime, and each a close facsimile of the Platonic ideal of the movie monster. The crawlers look exactly like the monster one would hallucinate if trapped in an undiscovered cave system with little hope of survival. But like all our primal fears, they are quite real.

The crawlers thin the herd quickly, and for most of the film the fighting is a meditation on the relationship between Sarah and Juno. Loved by the same man, haunted by the same tragedy, Juno is Sarah’s shadow self. When Sarah confronts Juno about leading them astray into danger Juno pleads, “I thought we could name the caves after you,” to which Sarah flings back accusatorily, “Or after you?” The camera frames them both and waits a beat before the next scene, in effect asking: what’s the difference?

Not much. They are two halves of one whole, to be sure. When they are the last two standing, their only hope is to act as one. Throughout the film, they are seen acting in parallel, their primal movements and fighting styles almost identical. In one harrowing sequence, we even see Sarah gasping for air in a baptismal pool of entrails and blood, as Juno does the same in an underground river. The film isn’t shy about pointing out that these are two women with one character, which makes the central tension of the third act work. Is it better for Sarah to recognize herself in Juno, and recognize what Juno has done to her, or should she resign them both to dying in the darkness?

The ending of The Descent was changed slightly for its American release. I prefer the original (you can find it on YouTube). Both are bleak, but the original is far truer: Most people who embrace blindness choose to stay in the dark.

Sarahjane Blum is a frequent contributor to Brooklyn Rail and author of Marriage Is Back: The Real Woman’s Guide to Meeting and Marrying.

Ruth Asawa: Citizen of the Universe

In Citizen of the Universe, the artist’s first public solo exhibition in Europe, Modern Art Oxford (MAO) presents Asawa’s work, all of her work—art, family, and community—in tandem, akin to her lived life.