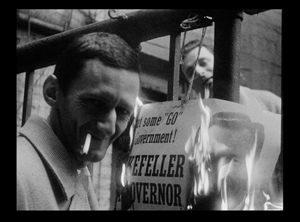 “Someone told me a while ago that I was a crank,” Ken Jacobs wrote. “It seemed a deft summation. I am disappointed, not with my personal situation —I’ve been very fortunate—but with the obscenity, that is the state of the world. Having never been in existence before, I imagined when younger humans were on the brink of correcting the errors of their ways. Wrong brink.”

Jacobs is a wiry 73, with tousled gray hair and features that betray a sharp intelligence. He and Flo, his wife and partner of 45 years, live in a 4th floor walkup in Lower Manhattan. It’s a comfortably cluttered maze, filled with computer equipment, books, records and films. A skylight shines down on a large wooden table, and a disorienting reversible mirror hangs upside-down on the wall. Somehow the mirror makes sense.

Jacobs is one of the most lauded experimental filmmakers America has ever produced, which is quite something for a blue-collar kid from Brooklyn. Over the past 50 years, he’s crafted a body of work that focuses less on storytelling than on the mechanics of film itself—“mining,” he says, the way images on the frames interact in the hopes of revealing a hidden truth. Hoping to alter, too, the way people look at the world. 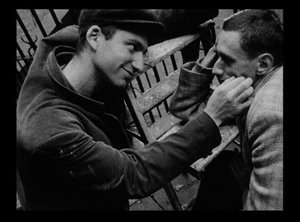 This past spring, he released Star Spangled to Death—the legendary 7-hour film he began in 1956, set aside, then picked up again a few years ago. It’s less abstract than some of his others, but he’s still trying to alter the viewer’s perceptions. As the title implies, the film is an indictment—albeit a compelling one—of what America has become over the past half century. It’s crafted from a mix of archival footage (forgotten Disney shorts, musical clips, political commercials), New York street theater, and intertitle commentary.

At heart, what Jacobs is doing is reinterpreting history, looking at American propaganda with a critical eye, and presenting it in such a way that each viewer will see something different. Think of it as indeterminate filmmaking—Jacobs doesn’t tell you what to think, just to think.

Born in Williamsburg in 1933, Jacobs was sent away at age seven to live with a man who may or may not have been his stepfather. He returned eight years later. Those missing years aside, his childhood was spent in the Brooklyn of streetwise dreams.

“It always seemed very Wizard of Oz-like to me,” he says. “There was this thing across the river. We were on Berry Street, so the river was right there and Manhattan was right there. But when you’re a kid, it’s this amazing, strange, ordinary thing.”

As a child of the ’30s, Jacobs lived a very free, yet very circumscribed existence. In his case, the world stretched across three blocks. He usually played on Division, until learning that the wilder kids were around the corner on South 10th. 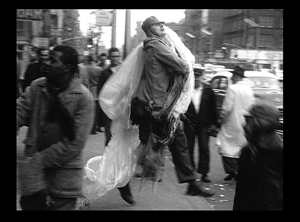 “My life was uncannily safe and calm and quiet. A lot of the people were first generation immigrants from Russia or Poland, speaking Yiddish, so it was a very bilingual neighborhood. As soon as you could walk, you went out and played by yourself…When we raised our kids here in Manhattan, it’s ‘Where are you now? You’re walking from here to there—’ None of that existed. People watched out for each other’s kids.”

Yet even in the midst of that innocence, he seems to have harbored an inherent distrust of state authority: “I saw my first cop when I was maybe 4 or 5 years old,” he says. “Big red-faced guy walking down Division. I saw this blue uniform—it was like something from Mars. I was scared witless and ran home.”

A political consciousness soon followed, and he blames part of it on the movies. One section of Star-Spangled to Death is entitled “Hollywood Reds Ruined My Life”:

They wrote anti-fascist, anti-greed movies and radio stories that pictured an America they only hoped for. A Lone Ranger nation, affirming justice for all, an America, let’s face it, that’s never been. They set me up for miserable disappointment with the hysterical reality. How better adjusted I’d be today, growing up with movies with names like, “Screw Thy Neighbor,” “Maximize Profits at All Costs,” “Let Them Eat Shit,” “Say Anything.” I could’ve been a regular Richard Nixon, gainfully employed in the service of the bottom line. I could’ve learned to turn on sincerity selling deeds to ranch-type homes with attached garages in all white neighborhoods in Heaven. I could be fomenting an attack on Canada right now, because it’s there. I could’ve been a somebody.

Perhaps not surprisingly, his development as an artist began around the same time. Dyslexia left reading difficult, but, as often happens, also led to a “three-dimensional sensitivity,” and an interest in visual art.

While an early interest in art and a distrust of authority might be enough to make any kid an outsider, returning to Brooklyn after those eight years with his “stepfather” left Jacobs feeling utterly dislocated. But he was lucky enough to receive encouragement from a high school art teacher, and transferred across the river to the High School of Industrial Arts (“It actually did have a painting and sculpture program”), though he admits he didn’t do so well at his other classes.

“I don’t have a formal education. I had a high school average of 57.”

“Oh, here I am exaggerating,” Ken said. “Yet here I am, a distinguished professor of cinema, with my high school average of 47. Let that be a lesson to all you dyslexics.”

When Jacobs was 17, the U.S. went to war with Korea. An attempt to claim conscientious objector status failed, so he spent two years in the Coast Guard Reserve. It both kept him away from his artwork and solidified his distrust of the State. He refers to his time in the military as a “sheer, stupid waste.” Shortly after his discharge, he began making films.

“The military is really a mystery,” he says. “People elect slavery. They’re indentured servants. They have to, in the worst way, do what the boss says. They wear uniforms. They agree to having their hair cut in a certain way. They salute. They stand at attention. It’s so ignoble. And of course to say so, for them to hear that, they would resent it. They would never lash out at the boss—they would lash out at someone who says such a thing. This is a terrible situation for a human being. Kill somebody? Be killed? They know they’re just suckers. They know they’re just being taken. What’s to respect?” 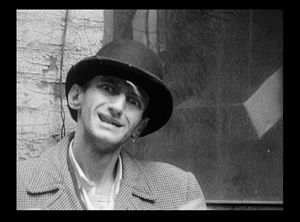 It’s just one more symptom of a disease he’s witnessed since the McCarthy Era. “I couldn’t imagine, now that I’m an old guy, what my generation would be leaving. Gee whiz. I think, for any number of generations before, I kidded myself in thinking ‘this is too obvious. This is madness.’ You just can’t have local craziness anymore. It’s now global.”

In Star-Spangled to Death, Jacobs recounts the story of an Enron executive who made a bad business move, then followed it with several intentionally worse moves. When his assistant questioned him, he replied: “You lose a hole in a bigger hole.”

It’s a way of thinking Jacobs sees at work not only in terms of corporate greed, but in politics and the war. It’s rampant, and part of the reason why, in recent days, he’s lost hope in the country, and in the power of art to change it.

“How can we do anything effective expecting the worst? And I do fear the worst—that what we are visiting on other countries will be visited upon us…I admire the people who are devoting their time to resistance right now. But I work at my abstractions. And even something like Star Spangled to Death, in terms of picking up a groundswell of interest, of it playing a part in a real mental revolution; it’s not doing that. It’s a curio.”

There are documentaries being made today that do have an effect, he admits, but those films—like An Inconvenient Truth and Fahrenheit 9/11—while effective, aren’t works of art.

“I come out of a time, a way of thinking, that imagines art as very important. Picasso’s Guernica counts for something. We see what’s left of [Erich von Stroheim’s] Greed and it’s such a monument to feeling and thinking. These things do save us as a human race.”

And perhaps that lingering belief is part of the reason why Jacobs continues making films.

“I get pleasure from what I’m doing,” he confesses. “I don’t think about these things when I’m working. It’s therapy. I’m able to block it all out …At this distance you don’t hear the kids screaming in the broken buildings in Lebanon and Haifa and Iraq and Amsterdam and Brooklyn and around the corner. Just don’t hear it. It’s nice here. Our little space, filled with books and records. Wow, civilization.”

On Thursday, Sept. 28, at 8 p.m. Jacobs will be premiering his new film, Two Wrenching Departures, at MoMA. The film is a 90 minute meditation on the deaths of his friends Jack Smith and Bob Fleischner, who died within four days of each other in 1989. Both men were featured in Star Spangled to Death.