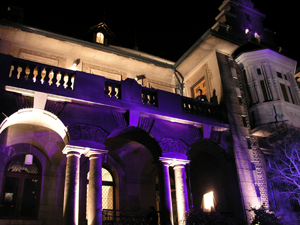 Artists from around the world donated hundreds of works of art in solidarity with the new socialist government of Chile of President Salvador Allende beginning in the early 1970s. The contributions continued after his death in the 1973 military coup through the 1980s. Now, after decades of storage in different places around the world and itinerant exhibitions within the country and in Europe, this collection has found a permanent space in an old mansion used at one point for the offices of the secret police for the former military dictator, Augusto Pinochet.

The Museum of Solidarity Salvador Allende (MSSA) was reinaugurated in July with pomp, circumstance and the presence of the recently elected socialist president Michelle Bachelet. Politicians and some cultural figures filed inside one after another, while outside a musical group played acoustic guitars to protest a new urban transit plan which prohibits street musicians from playing on the buses. “For years we have sung the songs of Víctor Jara but now with Transantiago our right to free expression is being cut off,” they claimed. Jara was the emblematic folk singer who had his fingers broken in torture in the notorious National Stadium, and was later assassinated. In front of the musicians, members of a local squat occupying a neighbouring abandoned mansion appeared with posters with even stronger messages: “It is here where the fascist government kills culture.” The cultural center established by the members of the house occupation is about to be evicted by local authorities.

Ironically, it is these groups who are demanding the fulfilment of Allende’s original promise upon starting the collection 34 years ago, the creation of a closer relationship between art and community.

The first painting to be donated in 1972 has no name. The Catalonian artist Joan Miró painted Untitled especially for the new collection. This contribution was a response to an “international campaign of defamation on behalf of powerful interests,” explains the 79-year-old director of the museum José Balmes. He is a painter from Catalonia, Spain whose relationship with the collection dates to the birth of the concept of this collection, Operation Truth.

At that time personalities from politics and cultures visited the country to immerse themselves in Chile to understand the revolutionary changes with Allende’s government. There were visitors from “The Italian painter Carlo Levi, the Greek composer Mikis Theodorakis, from Latin America Julio Cortázar and even an English Lord,” says Balmes. “Hundreds of figures came to see with their own eyes that there was no dictatorship in Chile, but instead a place with all the freedom in the world.” Amongst these visitors was the Spanish art critic José María Moreno Galván. It was he who proposed to take advantage of his close relationship with Spanish painters and European critics to collect works of art in support of Allende and his government. In a year and a half they were able to accumulate 500 works of art that were exhibited with great success in two openings inaugurated by the former president.

Even after the military coup in 1973, the works of art continued to arrive to the curators, now in political exile around Europe and the United States. Under the title of Museums of Resistance exhibitions of the donated artwork were held in cultural centers in Sweden, Spain and France, but eventually the works were all returned. At one point, four or five people were responsible for the care of 200 works, Balmes says as he points to the large piece by Italian artist Valerio Adami that he stored under plastic in his workshop in Paris for years.

This piece is part of the 10 percent of the 2,500 paintings, tapestries and sculptures being exhibited currently. The idea is for the pieces to be rotated through the museum, as well as to make the circuit in larger spaces. For example, in 2007 a large exhibition is being planned in the new cultural space practically underneath the presidential offices in the Palace La Moneda. It will take place one year before the 100th anniversary of Allende’s birthday in 2008. Balmes proudly comments that the Museums of Queen Sofia—and Joan Miró in Barcelona have expressed interest in showing parts of the collection.

Some of the themes of the artworks reflect artistic movements as diverse as Latin-American New Realism, optical and cinetic art, pop, abstract expressionism and surrealism. They range in date from the 1940s to the 1980s. Many of them express repression, torture and resistance. Others are homages to the former Chilean president or the figures in international politics. Some show book burnings and others are totally abstract.

The jewel of the museum is Isfahan III, an example of geometrical abstraction painted by the American Frank Stella in 1968. Valued at $10 million dollars it is the most valuable work in a collection which has yet to be appraised, and amazingly enough it had spent the last couple decades abandoned on the floor of a warehouse. “It was to cry to about,” recalls Balmes, who encountered it abandoned when he returned from exile. Only the frame had been taken. Not one piece of art was stolen during that entire period of inattention.

The collection ranges from the 36 engravings and three drawings by the Chilean surrealist Roberto Matta, pieces by the Latin american new realists Siquieros and Guayasamín to the large collection of 300 works by various Spanish artists like Oteiza, Equipo Crónica, Tàpies, Muntadas, among many others.

Many works present evidence of serious deterioration, like the Untitled by Miró. But the absence of restoration is intentional, partially in accord with curatorial trends and partially for a lack of resources. “We don’t want to pretend like nothing has happened here, we also want to show the truth,” explains Paula Maturana, a thirty-something curator of the MSSA. “This is a story which has not been told,” as she describes the rough and winding roads travelled by the works of art before having settled into their present, and permanent, home. 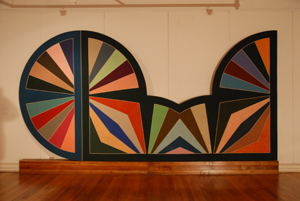 During the 1990s the collection had been held in a borrowed mansion in the possession of city authorities. The Salvador Allende Foundation did not have sufficient funds to restore the pieces of art, organize exhibitions nor remodel the house, which was steadily deteriorating. The only previous exhibition had taken place at the Museum of Fine Arts in Santiago in 1991, in celebration of the return to democracy. But years would pass and the works converted into a mythical collection that almost no one had ever seen.

But with the recent donation of these works of art to the Chilean state, the museum has begun a new stage. A public-private foundation took control of the collection and solicited international help in the purchase and restoration of an own old home, while Emanoel Araujo, the curator of the Afro-Brasilian Museum in Sao Paolo, Brazil participated in the design of the museum plan. He was the one who noted to the curators an ironic absence in the collection. “How could it be that there was nothing that had anything to do with Allende,” he told them.

Upon arrival at the new location at República 475 the team in charge of the museum was confronted with the painful memories within its walls. Constructed originally as the residence for the Spanish Embassy, it then was converted into a university building, only to end up as the last office of the now defunct National Center for Information (CNI). It was the primary institution for intelligence and control of dissident movements.

The first action of Miguel Lawner, the architect in charge of the remodelling, was the removal of the metal bars which blocked the entrance. Meanwhile, the famous muralist collective during the Allende years, the Ramona Parra Brigade, painted a permanent piece full of color.

“I’ve come to the conclusion that the only way to make places as dark as this healthy again is through culture and art,” says Patricia Espejo, the director of the Salvador Allende Foundation as well as the former president’s personal secretary to his final day, September 11, 1973. The only witness of his death that day was a typewriter mangled by the bombs that hit the palace. That and a maroon red tie found in his house now take residence in the new museum library.

Other objects of Allende’s that were rescued by anonymous people are now highlighted in a multimedia exposition in his honor. A blue laser crosses the room, drops of water fall and the figure of the fallen Chilean leader is projected on the wall. The sound of the water drops is mixed with that of another installation nearby. Tape recordings from 1968 to 1973 are being broadcast from The Wall of Voices. They were buried underground in an attempt to save them from destruction by the military government.

Farther along is a room with personal artifacts of the dead president. Behind a large window a simple display shows a wallet with two checks, chess pieces, an eyeglass case, a socialist party membership card and a black cape from Allende’s days as a doctor. “He liked to put it on and take a walk when he needed to solve a problem,” relates Nury Gaviola, a member of Artoficio, the art collective which conceived the installation. As Gaviola smokes a cigarette she observes that “there is so little that remains of his belongings, but his international stature is gigantic. It’s such a contradiction!”

The aging director of the museum descends slowly into the basement to show the remnants of the CNI activities in the old house. Hundreds of phone plugs and strings of telephone cables along the wall provided communication with hundreds of secret government agents in Chile and abroad. This was one of the main communication centers to coordinate intelligence and secret police within the country and amongst South American dictatorships. It was used to detain and eliminate citizens beyond their own borders.

It was an artistically avant-garde decision to leave that particular room as it was found. Soon there will be an exhibition of the documents that were discovered there, which could prove that CNI functioned under the orders of Pinochet, something that the Chilean justice system has yet to ascertain. Traces of this unpleasant past continue to appear.

In order to conclude this article, I can’t avoid citing the graffiti I saw in Puerto Montt, 632 miles south of Santiago: “Allende lives, the socialist party (P.S.) has died.”

Not even New York is safe from this truism. From September 14-30th, Allende Monologue: The Death of a President, written by the Argentinean playwright Rodolfo Queeblen, runs at the Theater for a New City.

Alina Reyes is a freelance writer born in Chile. For the past three years, she has divided her time between Santiago, Mexico City and New York City, and she is currently writing her first book, a travel journal about this experience. For more details on Boullosa’s work, go to: www.carmenboullosa.net