Emanuel Gat Dance, founded at the Suzanne Dellal Center in Tel-Aviv in January 2004, premiered Winter Voyage, a haunting duet performed by Israel-born Emanuel Gat and Roy Assaf, in conjunction with the two-year-old ensemble piece, The Rite of Spring at this summer’s Lincoln Center Festival. White lights gradually illuminated the stage of La Guardia Concert Hall, revealing Gat and Assaf, heads shaved, robed in slate tunics, standing on opposite corners of stage left. The stark silence was punctuated only by the rhythm of their exhalations and the sound of their feet hitting the marly as they ran across the massive stage. As selections from Schubert’s Wintereise played intermittently during the twenty-five minute piece, throughout which the men sporadically “reset” to their original positions, Gat and Assaf danced in unison with predominantly pedestrian movements—walking, running, gesticulating. They were both more and less than dancers; they were utterly human. 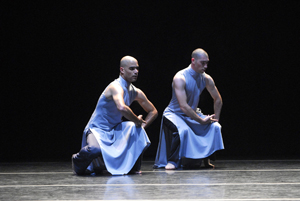 In Winter Voyage, Gat toyed with the body’s response to gravity, alternating between resistance and submission, through brute athleticism, acquiescent release, and the ride of effortless momentum. The contrast of movement with stillness, one of many dualities explored throughout the piece, was a common theme. This stillness, however, was not passive, but loaded, engendering some of Winter Voyage’s most intense moments. Their bodies were not at rest, but vibrated with a sense of expectancy, compounding the enigmatic, and therefore supremely compelling, nature of their relationship.

Initially, it seemed that Gat and Assaf, who often faced each other as they danced, were only aware of the other as if he were a mere reflection of the self. But eventually they made contact, again lapsing into stillness, their heads touching, breathing into the other’s neck, waiting for the other to react. The intimacy of such moments transcended typical notions of sexuality, for it was neither homoerotic, nor narcissistic. I don’t believe this effect was accidental—the shaved heads, the androgynous dress, movements that were simultaneously graceful and athletic, vulnerable and powerful, all pointed to an experience, for performer and audience member, that was universally human in a way that defied categorization. During such moments they seemed both comforted and filled with angst. The piece ended in stillness with Gat and Assaf standing side by side, facing the audience, as if noticing us for the first time. Winter Voyage is a brilliant example of how Gat’s late introduction to dance (he initially trained to be a composer) works in his favor, for his work is unapologetically human—it’s humble, yet powerful; inspired, but without pretense. 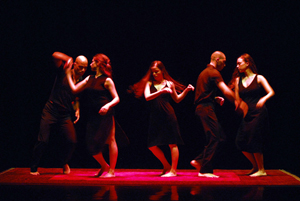 Winter Voyage was so mesmerizing I lost all sense of time. Even when their movements were subtle, or nonexistent, Gat and Assaf’s performance devoured the expansive stage and cold, impersonal concert hall. Conversely, the subsequent group piece, The Rite of Spring, choreographed to Stravinsky, did not have the same enthralling effect. About fifteen minutes through the thirty-minute piece my mind wandered.

Three female dancers (Avital Mano, Doron Raz, and Alexandra Shmurak) began center stage on a blood-red carpet illuminated by a rectangle of red light—a striking contrast to Winter Voyage’s bleak winter setting. Gat and Assaf join the women in a ritualistic and almost trance-like salsa, seamlessly transferring from one partner to the next, always leaving one woman to dance alone. The piece lacked the texture of the previous duet. While the choreography in Winter Voyage spanned from the linear to the sinuous and the cyclical to the staccato, The Rite of Spring was evenly paced and constantly, monotonously, fluid.

The dancers would temporarily break away from the monotony of the salsa and the restriction of the red carpet to perform their own individual movements. These solos were primarily executed simultaneously, each dancer reveling in his or her own particular style: some dancers were playful and quirky while others were somber or meditative. Eventually they would converge on the red carpet to commence their ritualistic partnering. The piece culminated with four of the dancers sinking into repose on the carpet while one woman put her hair up into a bun before joining them.

Juxtaposing Winter Voyage and The Rite of Spring enhanced the same duality that underscored the first piece, but I’m not sure it was for the right reason. While Winter’s atmosphere—achieved by Gat’s choice of lighting, costume, and sound engineering—provided a bleak backdrop for the rich and powerful movement, The Rite of Spring, with its intense, Inferno-like atmosphere, making me think of summer more than spring, resulted in soulless execution. I can’t help but think that Gat had intended for the latter piece to come off as somewhat mechanical and vacant due to the methodical nature of the partnering. Although the contrast of the carpet “break-away” did provide the piece with some needed texture in terms of structural and dynamic variation, I felt it was rather inadequate because I could neither perceive an intention behind this digression nor detect a lingering transformation in the dancers once they returned. I wonder how I would have felt if the order of the pieces were reversed. Perhaps the effect would have been the same, but I daresay I would have left the theater wanting more, instead of looking at my watch.

Summer Fun by Jeanne Thornton is an epistolary novel that is as much mystery as cultural analysis and rewards the reader by never giving us what we expect or what we think we want.