Every once in a while I have a crush on a dance. I play the scenes over and over in my mind. I download the music. I concoct fictional personas loosely based on the dancers’ bios. My most recent crush is on Telophaza, Ohad Naharin’s latest creation for Batsheva, Israel’s premiere dance company, which performed as part of this year’s Lincoln Center Festival. With its intoxicating series of scenes set to 14 distinct songs—from Greek folk music to soulful Bruce Springsteen—Telophaza left me totally and completely smitten.

Batsheva’s last U.S. engagement, Mamootot (2005), was marked by rare intimacy. In a small studio at the Mark Morris Dance Center in Brooklyn, dancers were surrounded by the audience in a striking up-close-and-personal performance. Telophaza proves that Naharin, who has been Batsheva’s artistic director since 1990, can translate closeness onto the largest of theaters. As the work opens, a face appears in a live-feed video close-up projected on one of four overhead screens. One by one, dancers emerge, show their faces on screen, and join the others in unison dancing that crouches and skims center stage. Soon, the cast of 38 washes across the larger-than-life New York State Theater, alluring in liquid-fire solos. Just as I am besieged by a magnitude of bodies dressed in neon spandex, a face or a pair of feet looms large above the stage and demands my attention. 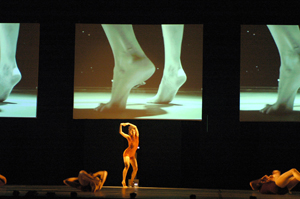 The dancers, who undergo numerous costume changes, form an assemblage of youthful bodies painted with stretchy fabric ranging from neutral shades to Pop-Art prints. Throughout Telophaza, dancers line up in rows and tap their feet or bounce in perfect unison. But they don’t stay put for long. Dance sequences, influenced by a grab-bag of techniques and seasoned with quirky gestures, break out before anything gets monotonous.

Scattered throughout are potent solos where dancers display whiplash speed and slinky assurance. In one scene, a statuesque woman waits as dancers set up cameras around her. Each camera connects to a screen overhead, giving the audience four viewing angles. She carves the space with catlike precision, making her solo worth the wait. Jeff Beck’s bluesy tune coaxes further solos, each of a similar flavor. 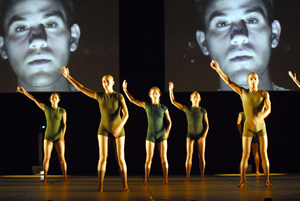 Intermittently, a woman named Rachel speaks to the audience, presumably from backstage. First, she asks us to turn off our cell phones. Later, she leads the audience through a sequence of hand movements. At the end of the piece, Rachel re-emerges and asks both audience and dancers to stand. We all follow suit—at least most of us. The dancers line up along the edge of the stage, facing the audience. “And now, DANCE!” Rachel commands. Pulsing club music blares out over the orchestra seats. The dancers erupt into raucous, wild movement. The audience cannot keep up with the dancers and, for the most part, we watch them. Soon, a mostly-naked couple slithers onto the screen above, groping and clinging to each other. This is the first time that Telophaza’s undeniable sexiness is indulged and it muddles the ending of this otherwise crush-inducing performance.

CATHERINE MASSEY writes about dance and lives in Manhattan. She is a graduate student at NYU.