Between the time I was assigned this book to review and the review actually was finished, Judith Moore, the author, died. My editor wrote and told me. It was so outrageous a concept that at first I thought it couldn’t possibly be true, because you see, since I had read the book and thought about it for so long, she belonged to me. It was like learning that my sister had died by reading it in the newspaper. So I went online to make sure. It was true. Stupidly, horribly true. 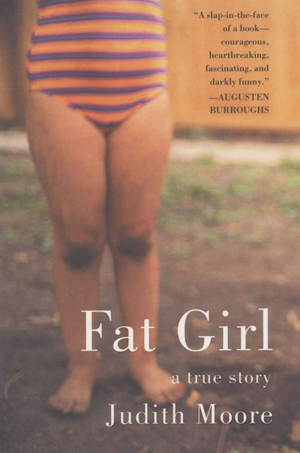 Worse, in my review I had said I found her to be a great writer, (which I don’t say often believe you me, I’m not a worshiper at the altar of modern cleverness) but I had urged her to work harder. And now, of course, she can’t. Stupid, stupid, stupid. That is what I think about the deaths I am against. The deaths I wish hadn’t happened. They’re stupid.

So, still disbelieving, I went online looking for news of her. While I was there, I ran into many other reviews of Fat Girl, universally laudatory. No-one had implored her to work harder, no-one else had reservations. Everyone else thought the book was perfect. Did I think that too now?

Let me quote from my review. Or no, forget that, you can just read it. The ending seems, now, unbelievably sad.

Right away you’re allowed to gawk at the car accident aspect of Fat Girl. If you’ve never been fat, you’ve wondered, haven’t you? What it would be like to feel those giant greasy thighs rubbing together as you struggle to move a mountain of flesh up the stairs while awkwardly carrying two bags of GROCERIES to your front door? You’ve wondered why food holds such allure, such sucking pulling force that the fat person can’t stay away. Food as heroin, that sweet release, the ring of a the slot machine, the lovely pull of the cancerous cigarette, the gold swelling hips of your 10,000th prostitute. (See how much I, a person without much addiction to those substances knows about the desperate desire? That’s because I’ve read a lot of addiction stories about the other things but this is the first one that gets to the meat of the story of food, food, food. Food piling on the yellow gushing jiggling disgusting sickening fat blob that is you. Food that smoothly glides down your throat even as your brain yells “no, no” and your hand, hypnotized moves another chip toward your mouth.)

Judith Moore tell us the whole story of being a fat girl. She can write well and she speaks the truth. She starts with some of her adult life. A guy mentions her size as a reason not to have sex with her in a rather shockingly blunt fashion. Then she tells about the childhoods of her parents and moves on to her own childhood. Her pretty, abandoning mother, her fat confused father, a bit of sexual abuse, an ugly uninviting gramma, the insults of the other children, the escape into reading.

I don’t know. The book is such an excellent start on delving into the subject matter, it seems impolite to demand more. And as I am doing so, I am well aware that perhaps the vast majority of readers would demand less. But more is what I want. I want the labored breathing as you get out of the bathtub. I personally would love to read a great writer (Judith—that would be you) describe masturbating while thinking about someone you’re pretty sure would be really grossed out to know that’s what you’re doing. I’d like to hear about food spilled on giant breasts when you‘re out with best friend‘s boyfriend‘s really cute best friend. I could take a lot of children’s mean remarks. All of them really. I want to live inside the experience. In fucking fact, that’s what I want from all my books. All the stuff, all the worst stuff, all the true stuff, all the shame of being human. Why the hell don’t I get that very often. Or even, truthfully, why don’t my own books do that?

Well, never mind. I digress even more than usual.

What I mean to be saying is this: tell us more Judith Moore. You can write, don’t hold back. Tell us more.