I can still see
The new weather

That flowed down from Canada

When the rain was over

I can still see
The main street two blocks long

The weedy edges of the wilderness

Around the sawmill town

And the towering shadows
Of a virgin forest

We walked around
In a small traveling carnival

I can still hear

And smell its dusty elephants

I can still feel your hand

When human, quarrelsome
But stronger

Than death or anger

Every single one of Anne Porter’s poems is as clear as this one, diamond-clear. Because of this Living Things is easier to buy and give to friends than to write about. Porter’s poems need no explanation, no accompanying prose. Their direct, level gaze sees through all that. The proper response to her work is to open her book, point to a poem and exclaim, “Here, read this!”

Living Things adds 39 poems to Porter’s 1994 book An Altogether Different Language. Since Porter is 95 years old we may think these are all the poems we will get from her, but she is a religious poet whose faith supplies subject matter and inspiration. This last decade has been her most prolific. It’s easy to imagine that she will write poems until in death she goes off to Purgatory as she hopes to. 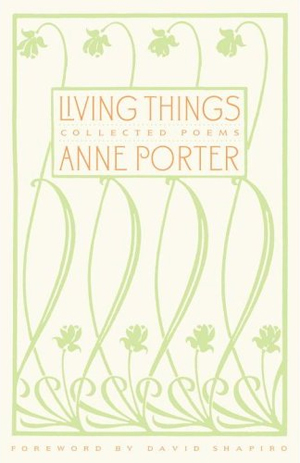 As the wife of the painter Fairfield Porter she knew well and played hostess to the first and second generation New York School Poets. For eleven years beginning in 1961 the poet James Schuyler was a member of her household in Long Island and on Great Spruce Head Island, Penobscot Bay in Maine. Her poetry resembles Schuyler’s closely enough so that the differences between the two stand out. Both Porter and Schuyler are poets of sharp, sustained attention. Schuyler’s powers were an extension of his nervous system. He was almost helpless before the inrushing sensations the world gave him. When he looked around a room or out a window he didn’t observe but participated in what he saw. The reader’s joy in Schuyler’s poems can come from the clean, refreshed eye, the polished lens of Schuyler’s own seeing. This invigorates his language, which in turn invigorates the seen and experienced world.

Porter’s attention is not so wide, not so atremble as it is deep. If Schuyler is tense, she is calm:

The Song of the Wren

It rambles on and on Jig for a tiny fiddle
Squeak in the rusty wheels
Of a rickety elfin cart
Wobbling toward the sun.

Schuyler loved to list as if all the things in the world are sacraments. Porter’s turn outward is toward prayer. In fusing inner belief with outward expression meant for God’s ear her poems are acts of faith. So too are Schuyler’s but until he entered the church late in his life his faith was the heightened awareness possible through his art.

And then he slowly peeled And ate an apple

And that was all.

That was all Kelly needed to do. Like William Carlos Williams’s poor old woman munching plums or the Negro woman he passed looking in her shoe for what had been hurting her, Kelly reminds us how we are most human when losing ourselves to instinct. Bertholt Brecht said, “Grub first: then ethics.” Grub first then everything else.

For poetry Porter may be suggesting that while the big subject can be showbiz with its desire to impress, our intense feelings are evident and memorable in what we do out of habit and need. If Williams heard his poems, as he said he did, from the mouths of Polish mothers, Porter sees hers in ninety-year old Stella Rapkowski’s daily devotions in which “Her every morning / Is a faithful copy / Of all her other mornings.” The humor in what Kelly did is that he is literally out to lunch; in his own world while all about him is the whirl paying customers are there to see. He knows what is most important but like Porter he is too modest to say so. Indeed, there is nothing to be said, the act of eating says it all. All poetry has an unsaid quality that we identify as what can be read between the lines. What is absent in Kelly, Rapkowski and Porter is strain; what is present is the peace and quiet, the order necessary, to most deeply experience the world. From my meager religious education I remember the phrase “the peace that passeth understanding.” I understand this state as one that is beyond mere understanding. Anne Porter’s poems induce this feeling.

A Selection of Drain Poems

Ken L. Walker has published two chapbooks—Antworten (translations of Georg Herwegh from Greying Ghost) and Twenty Glasses of Water from Diez. He has poems and translations in Boston Review, Tammy, Seattle Review, Atlas Review, and ANMLY. His prose and reviews can be found in The Poetry Project Newsletter, Hyperallergic, and Diagram. He holds an MFA from Brooklyn College, works in advertising, and spends the rest of his time documenting drains.

Since his 1955 debut at the Six Gallery reading where Allen Ginsberg first read "Howl," Michael McClure (1932-2020) has been one of the most significant and well-known poets in the U.S. Mule Kick Blues and Last Poems, the final book he completed in his lifetime, appears this month from City Lights Books.

Tuhin Das’s Exile Poems: In the Labyrinth of Homesickness

From an interview that follows Das’s new collection of poetry, Exile Poems: In the Labyrinth of Homesickness, the writer says, “I am a Bengali and Bangladeshi first. Some people want to define me by my religion, but I want to be known by my culture, which is Bengali.”