On September 4, 1882, down by the East River in lower Manhattan, Thomas Edison flipped the switch on a technological innovation that would permanently alter the cultural and environmental landscape of the U.S.: the coal-fired electric power plant. At the time, the plant, known as “dynamo,” or “Long-Legged Mary Ann,” for its sexy, leg-like smokestacks, was both a marvel—lighting up all of lower Manhattan, including the offices of the New York Times—and a nuisance—covering the city in a gritty layer of soot. More than a century later, we’re not only still living under the spell and curse of coal, we’re betting our future on the shiny, black, polluting rock. 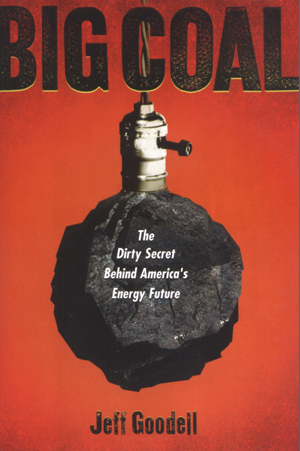 In Big Coal: The Dirty Secret Behind America’s Energy Future, Jeff Goodell takes the reader on a tour of what goes on behind the light switch. From the sixty-foot-wide coal seams of Wyoming’s mines to backrooms in Washington where cunning coal lobbyists persuade power-hungry politicians to cut coal some slack, Goodell expertly digs beneath the grimy underbelly of an industry that’s become the backbone of the American lifestyle. Predictably, what he unearths is a classic story of unchecked power (both literally and figuratively), environmental degradation, and an industry that refuses to clean up its act.

The U.S. is naturally blessed with an abundance of coal—more than 25 percent of the world’s recoverable reserves, in fact. By some estimates (those that don’t account for the challenges of extracting all this coal from underground), we have enough coal to fuel our energy needs for the next 250 years, and as a result we heedlessly consume it like we’ll never run out. Almost half our electricity comes from coal-fired power plants; the average American consumes twenty pounds of it every day. Thanks to George W.’s coal-friendly policies, 120 new plants were either planned or under construction in 2005. Recently, GE went so far as to launch an ad campaign that invoked the positive attributes of this “buried sunshine,” as the industry PR reps like to call it, by featuring scantily clad models deep in a mine. “Now, thanks to emissions-reducing technologies from GE, harnessing the power of coal is looking more beautiful every day,” the ad over-toned.

Despite what GE and the big coal companies might want us to believe, coal is as dirty and dangerous as ever, says Goodell. Coal-fired power plants spew out over 40 percent of the nation’s carbon dioxide, making coal a main contributor to global warming. Coal is also responsible for two-thirds of the nation’s sulfur dioxide emissions, and a third of all emissions of the neurotoxin mercury. Disturbingly, as Goodell reveals, we actually have the know-how to combat the worst of the emissions. A new technology called Integrated Gasification Combined Cycle (IGCC) has been proven to be 10 percent more efficient than conventional coal plants and allows for the possibility of capturing CO2 before it hits the air. We’re not without solutions, just without the political and social will to implement them.

Goodell is a strong writer with a shrewd eye for detail and irony, and what he presents in Big Coal is both an accessible account of the risks we’re taking by placing our energy bets on coal, and a strong narrative complete with inarguable statistics and memorable anecdotes. For instance, there is the politician who tells Goodell that flattening West Virginia through mountaintop-removal programs that cut away the earth to get at coal are a good thing because the state could use level ground for more golf courses. The book is spotted with these types of colorful asides, and although they occasionally seem gimmicky, they lend the book a welcome degree of readability.

“In the coming decades,” says Goodell, “the great danger is not that the world will burn more coal—that’s a given—but that we will burn it badly, cheaply, exploitatively.” So he argues, it’s imperative that we realize the importance of changing. Big Coal is the perfect book with which to develop the necessary, clear understanding of the environmental and social consequences that accompany a seemingly simple gesture like plugging an appliance into the wall.

When you google “land art” one of the top options features two photographic examples: Robert Smithson’s monumental Spiral Jetty (1970), perhaps the paradigm for the genre, and Alan Sonfist’s Time Landscape (1978). Smithson’s earthwork is a massive and muscular transformation of terrain set in the vast open area of Utah’s Great Salt Lake. Its image is quickly identifiable, iconic. Time Landscape is modest, non-iconic, and set in the heart of an urban metropolis.

Over three weekends in June, Movement Research collaborated with River to River to curate a series of processional performances in Battery Park City. I attended Okwui Okpokwasili and Emilý Æyer’s “Procession,” which proved to be both simple and challenging.