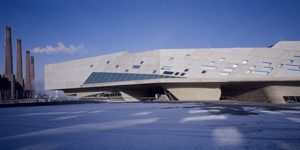 Anyone disheartened by current world events should make it a point to visit the Guggenheim Museum’s 30-year retrospective of Zaha Hadid, one of the most prolific and inventive architects practicing today and the only woman to win architecture’s prestigious Pritzker Prize

This comprehensive retrospective (her first major one in the United States) includes paintings, sketches, large photographs and scale models of realized and theoretical designs for buildings and public spaces. There are also chandeliers, furniture, a kitchen and utensils, a car (even a suggested intervention to enhance the fluidity of Wright’s design for the museum itself) note: this idea, which entailed the addition of undulating styrofoam forms to the circular geometry of the ramps and atrium—suggesting an elastic, pulsating structure—was not realized in the current exhibit. However, the viewer gets a sense of what might have been from digitalized images; as well as, from the ever-changing reflections of the rotunda in Hadid’s sterling silver kitchen utensils, on pedestals further down the ramp.

Born in Baghdad in 1950, Hadid now lives and works in London (she left Iraq with her family after the Iran-Iraq war). She attended the Architectural Association in the early 1970s and made the acquaintance of Rem Koolhaas, who was her professor, mentor, and later her colleague, along with Elia Zenghelis at the Office of Metropolitan Architecture. She opened her own practice in 1979.

Hadid’s early designs, inspired by the Constructivist and Suprematist movements in art—particularly, the paintings of Kazimir Malevich—remained largely theoretical for about 10 years. Her creative process involved working out her ideas through sketches and paintings, many of which are displayed in the current exhibit. Her undulating two-dimensional work presents her architectural designs from multiple viewpoints and time frames (like early Cubist paintings), giving the impression—and the feel—of rhythm and movement within the space, rather than a straightforward rendering of it. Although impressive as paintings, Hadid’s visionary images stirred doubts about their feasibility as actual constructions.

Le Corbusier described good architecture as a moving, living thing that reveals itself as we walk around and through it. Similarly, Frank Lloyd Wright defined organic architecture as the flow of space, inward and outward. From her earliest completed building, the Vitra Fire Station (Weil am Rhein, Germany, 1994)—a beautifully realized evolution of form cutting through space—to the LFOne project (Weil am Rhein, Germany, 1996-1999), where existing pathways flow into and become part of the structure, to her first building in the United States—the Lois and Richard Rosenthal Center for Contemporary Art (Cincinnati, 2003)—Hadid gives form to the theories of her predecessors.

In the Rosenthal Center—like the LFOne project, but in an urban context—the exterior space (in this case, the sidewalk) slides right up into the building while the glass-enclosed ground floor conveys the sense that the rest of the structure is gracefully lifted on its slender columns, reminiscent of Le Corbusier’s elegant use of weight, proportion, and light. The Rosenthal Center is the first major U.S. museum ever designed by a woman, and notably (or predictably) it is not in New York City.

The work of Hadid and her colleagues—including her partner, Patrik Schumacher—often calls to mind elements of nature, such as the rhythm and flow of marine life in the manta ray-like shape of Hadid’s London Olympic Aquatic Centre (ongoing). With this project, as in all of her current work, Hadid did away with pencils and paint, inventing her forms directly on the computer. To design the Phaeno Science Center (Wolfsburg, Germany,1999-2005), she purposefully distorted a computerized grid, pulling down cone-shaped “worm holes” to form individual supports that act as access points (stairways) into the building while lifting it off the ground to create open-air spaces for movement and interaction.

Hadid’s BMW Plant Central Building (Leipzig, Germany, 2001-2005) further illustrates her belief that architecture can positively influence human psychology and social behavior. As cars glide by on overhead ramps, to remind one and all of the function of the factory and foster pride in its product, the centrally located cafeteria purposefully encourages interaction between workers and administration.

People seem to enjoy, or love, the experience of moving through Hadid’s visionary structures despite the ongoing, ever-changing and rapid movement of their forms. Hadid may not be the architect of choice for those who believe that architecture must, above all else, convey a sense of stability; but, to a surprising degree, her buildings manage to provide a solid anchor to the ground plane while simultaneously conveying a furiously dynamic sense of movement. It’s a kind of magic.