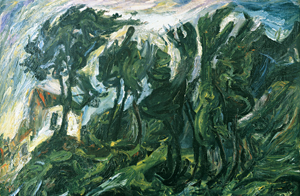 In terms of both Cubism and modern art, Chaim Soutine did everything wrong with a forcefulness and sense of purpose that rivals Picasso’s. His thickly packed, gelatinous paintings have no overall unity or structural design, and they concede nothing to the decorative. In contrast to most artists, whether post-Cubists or not, he didn’t systematize his gestures. For all their use of viscous paint, they are remarkably unembellished with signs of the painter’s touch. Everything is there out of necessity. And, instead of emphasizing the painting’s two-dimensional surface, Soutine twists and pressures space until everything threatens to break free. The clearest art historical precedent for this spatial manipulation is El Greco, whose work Soutine greatly admired. His landscapes of Ceret depict an uprooted, tornado-like world in which each brushstroke and element fights to holds its place, like commuters crowded together on a runaway subway. He seems to have believed that paint was capable of conveying both the materiality of the world and the dynamic forces governing reality. His quick brushstrokes and glutinous paint unify exuberance and terror, a deep anger and an equally deep sympathy. Like a child, he was fascinated by death. William Butler Yeats could have been describing Soutine’s paintings when he wrote, “A terrible beauty is born.”

In many of his still-lifes, the subject is a butchered animal. Both an exterior and an interior, its glistening red carcass is Soutine’s analog for the painting: purity cannot be achieved in either art or life. In Carcass of Beef (1925), the stretched, hanging, hollowed out body ruptures the painting’s surface. Neither benign nor malevolent, the faceless forces animating every inch of his paintings are integral to a vision of reality in which destruction and renewal are different sides of the same coin. We kill in order to live, and in this regard we share something with animals. However much we utilize our intellect, we are unable to completely overcome our instinctual side. While this understanding of reality isn’t exactly new, Soutine is one of the few modern artists to focus on it.

Is it any surprise then that Soutine’s paintings still haven’t been assimilated by mainstream American culture? In the catalogue accompanying this exhibition, the curators, Maurice Tuchman and Esti Dunov, point out “that not a single painting by Chaim Soutine hangs on the plentiful walls of the new MOMA,” and that the museum recently deaccessioned his Chartes Carthedral (1934). Clement Greenberg believed that Soutine’s indifference to Cubism doomed him to be a minor, inconsequential artist. By juxtaposing Soutine’s landscapes and still-lifes with the work of twenty-one modern and contemporary artists, Tuchman and Dunov challenge the received formalist view that a painting’s surface should be unified. And while not all the artists in the exhibition are up to the challenge, the premise is particularly important at this moment, because, at the very least, it exposes some of the assumptions governing much contemporary painting.

The exhibition offers a healthy counterpoint to those painters who tacitly uphold Greenberg’s belief that a successful painting not only emphasizes surface unity, but also denies psychological depths, refuses to acknowledge the unavoidable changes the body will endure, and ignores mortality. Artists who make such paintings, many of whom are celebrated, seem to be satisfied with carving out a stylistic niche within the cul de sac that formalist thinking defined for painting. Greenberg showed us what it takes to make a polite painting, while Soutine mounted an attack on politeness of every kind. He believed that reality was rude and offered no sanctuary, and that the body continually endures ignominy of one kind or another. If, as Willem de Kooning believed, paint was invented because of luminous flesh, Soutine seems to believe that it was invented because of glistening meat.

Soutine has had the most immediate influence on the postwar generation of English painters, many of whom are Jewish (Frank Auerbach, Lucian Freud, and Leon Kossoff). On a formal level, the reason for this is because neither Cubism nor abstraction ever became central in modern British art. On a personal level, Soutine’s Jewishness, as it was manifested in his paintings, must have spoken to Auerbach and his Jewish painter friends in a way that little else did. For one thing, it proved that they didn’t have to assimilate, that they could remain true to the local and particular circumstances with which they were most deeply familiar. Surface sophistication was a sign of being an insider and for them a betrayal of their permanent Outsider status. In America, Soutine had a profound influence on de Kooning and Pollock, both of whom were trying to work their way out of the repressive effects of Cubism.

In a telling interview with Geoffrey Dorfmann, which is excerpted in the exhibition catalogue, Milton Resnick said: “My trouble [with Soutine] was that I felt I shouldn’t be influenced because he’s not modern.” Resnick wasn’t alone in this feeling. After being briefly influenced by Soutine, many artists backed away from him. They wanted the security that cubism’s scaffolding or any other unifying principle had to offer. Soutine wasn’t a cubist, but, contrary to most art historical views of him, he was innovative in his hurricane structuring of space. Those who see him as a purely emotional painter don’t get it, and their use of thick paint ends up being a nostalgic gesture. The undeniable power of Soutine’s paintings is due in part to his understanding that any evidence of gravity is a sign of death amidst reality’s indifferent whirlwind. In Two Pheasants On A Table (1925), the table is floating off like an umbrella, while the two elongated birds have managed to imbed themselves in the cream-colored tablecloth.

Artists as different as Frank Auerbach, Willem de Kooning, Richard Diebenkorn, Jean Dubuffet, Louise Fishman, Bill Jensen, and Leon Kossoff learned from Soutine’s disruptive approach and uprooted space. He wasn’t afraid of destroying his work and he never lost sight of the fragility of existence. The one artist who clearly did not belong in the exhibition was Joel Shapiro whose hanging sculptures have nothing to do with Soutine, but a lot to do with cubism.