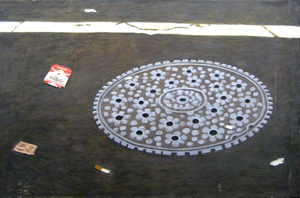 Rudy Burckhardt, best known for his photography, films and beguiling autobiography, Mobile Homes, also made extraordinary paintings of everyday life. In “29th Street Panorama” Burckhardt records every detail of the water towers, windows and brick buildings visible from the rooftop from which he worked. The work brims over with love for its subjects and the emphasis is egalitarian and exacting enough to recall the work of American primitives such as Salisbury Erastus Fields, whose Edenic, visionary landscapes are among the most beautiful creations of 19th century American art.

Burckhardt seems to love automobiles, manhole covers and chimneys beyond any consideration of downsides like traffic congestion, sewage, sewer pipes or pollution. Such indiscriminate love appears hedonistic, which it is. Couch it in any terms you wish—political, social or whatever—an artist seeks self-satisfaction and identifies with his or her creation primarily in terms of the pleasure it provides. This is unmistakably apparent in Burckhardt’s paintings. He clearly loves both his medium and his city. This, his painting suggests, is enough. Such passion is often entirely lacking in contemporary art.

It seems inappropriate to label an art world insider like Burckhardt as a primitive. He studied painting at the Academy of Naples on the GI Bill and was a friend to prominent painters such as Willem de Kooning, with whom he roamed New York City’s streets gathering inspiration from the grit, and his formal knowledge of art is clearly evident in his films and photographs. It seems more likely that, overrun as we are by the wolves in sheep’s clothing—artists whose work make a virtue of sardonic wit, couched in traditional style—it has become nearly impossible to recognize a real lamb when we see one. It wasn’t that Burckhardt was naïve; rather, the intensity of his enthusiasm was far more important than any virtuosity he might have sought to acquire.

In my favorite piece in the show, a lonely manhole cover occupies a foreground stretch of asphalt that recedes to meet the city in the distance. The longer you stare at the painting, the more this manhole cover seems to detach itself in space, first from the buildings, then from the ground itself until it hovers awkwardly like an Ed Wood flying saucer. It is painted with the same light caress, the same earth tone palette as everything else in the painting, yet its isolation lends it a life of its own.

You know a thing only by its context. Things make sense in terms of the other things around them. Alone, they become unreal, otherworldly. Burckhardt’s gift was to see things in this way—alone, as themselves—and love them for it.

Gina Beavers: The Life I Deserve

The lighting for Gina Beavers’s exhibit The Life I Deserve is Instagram perfect. That seems only fitting for paintings based on social media posts and aware that they will return there as #art #museum #artselfie or even, in a potential throwback to 2015, #museumselfie. The artist’s #Foodporn series from 2014 gets particular attention, though the newer series based on makeup tutorials had some snapping pics as well. All this begs the question, what are we looking at?