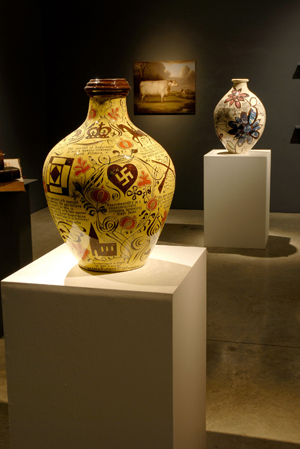 We’ve quickly reached the last days of summer, again. Unlike New York, where things gradually quiet down over the final weeks, some galleries over here seem to use the moment to put on more fanciful and creative endeavors, to give in to the pressure of letting their artists curate and to take a chance to display their own creative personalities.

Hence White Cube (www.whitecube.com) has put on Dark Matter, a show of black objects, which would have been sexy had not Maureen Paley (www.maureenpaley.com) done one the year before. Paley’s, The Black Album (including Banks Violette, Seb Pantane, Terence Koh), was far more “Rock and Roll” than White Cube’s current show, despite the presence of Ad Reinhart, Gonzalez-Torres and Damien Hirst, among others. (Not to forget Phong Bui’s, Paint It with Black, at Betty Cuningham in New York, also last year.)

Aside from the Francis Bacon triptychs at Gagosian, the most exceptional solo exhibition in London this summer is a strange little show by Clunie Reid at Keith Talent Gallery. The brashness of Reid’s oeuvre is well suited to the London art world, but that would be a disingenuous consideration of her work. Reid’s modus operandi seems to be that of perpetual re-invention. Speak to her, and she describes her approach somewhat as being “responsive” rather than “internalized”. At first glance, this first one-person show seems simply to be of large, cheap-looking black-and-white posters gaffer-taped to one wall of this long and narrow space. The posters are a melange of found photographic television and Internet images juxtaposed against those taken by the artist herself, all of which have been manipulated before being printed. Clint Eastwood with his eyes scratched out, semi-naked men frolicking humorously, the artist posing like James Bond in her studio with “walkies” scrawled over her face—not to mention installation views of other artists’ shows—all overlap each other.

What do they mean? Maybe only Reid can tell us. It is a melange of visual consumer culture smashed horizontally together, effectively competing for purpose. Her strength has always been to jar the tension between her drive towards subject matter—in this case an eroticized one—and natural formal intelligence. Hers is an instinct for collage and juxtaposition, often in the spirit of German artists like Kippenberger and Polke, replete with a hearty humor. Like Perry’s idea of Lincolnshire or the Hayward Gallery’s Surrealism show (reviewed here), it is a certain atmosphere or attitude that distinguishes it from the typical white cube gallery show.

The star of the summer, though, has to be Undercover Surrealism at the Hayward Gallery (here, note, that I have a fellowship at this gallery). In a sense Surrealism has been assimilated into everyday life, where we regularly catch “surreal” tropes on MTV, Hollywood and television without blinking an eye; yet, we have forgotten the intellectual underpinnings of the movement and its desire to shake us out of our daily grind. Thus the Hayward, along with Dawn Ades and Simon Baker, has put together a left-of-field show, one that’s daring in the sense that its point of departure is an academic journal: George Bataille’s Documents.

Perhaps known more for his quasi-pornographic novels and large influence on French post-structuralist thinking, Bataille in 1929 published a journal that brought ethnography, archaeology and popular culture closer to art for a mere 15-issue run. But this is really a show of atmospheres. Walk into the space and eerie flute music from a short clip of Charles F. Reiser’s, The Hollywood Revue of 1929, haunts the gallery. The show itself brings together objects, photos, films and artworks that were written about in Documents, thus providing the curators with an opportunity to situate turn-of-the-last-century kitsch with tribal objects and startlingly fresh Surrealist painting. Strange and playful Miros hang next to photographs from slaughterhouses, while Arp reliefs and Giacometti sculptures nudge against African Janus heads. After these sharp contrasts, the centerpiece turns out to be a spare and cosy space with a few Surrealist era Picassos. He was the sole artist to have an issue devoted to himself. On the wall is Roger Vitrac’s poem, “Humourage to Picasso”, and as one newspaper here states, the show is a “sly kick in the Picassos”!

This is one of the few exhibitions where the wall texts seem to genuinely enrich the show’s content and, thus, “educate” the visitor. In each gallery one of Bataille’s ideas is illuminated. In fact, the final space is a reading room, painted bright yellow with facsimiles of the journal in French and an English translation to its side. Instead of being just a study area, it becomes the final treasure to be discovered. Thus, the month’s final words go to Bataille: “… I defy any lover of painting to love a picture as much as a fetishist loves a shoe.”

Unlike other museum-quality shows that occur in commercial spaces, usually of a single famous artist like the Francis Bacon triptych show at Gagosian (www.gagosian.com), Victoria Miro has allowed Grayson Perry to organise a show of artifacts—not art works—from the Victorian period intermingled with his own ceramic sculptures. Described as a “narrative three-dimensional poem,” this eerie grouping was first exhibited at The Collection in Lincoln this February. (www.lincolnshire.gov.uk/ccm)

With the gallery walls painted a deep gray-blue, and the centerpiece of the show a horse-drawn hearse from the 1880s, Perry has recreated an atmosphere akin to that of a natural history museum. In the gallery’s project space, Perry has placed a selection of historic photographs from the period with some of his works on paper; while dotted all around the walls of the central space are artifacts drawn from Lincolnshire’s local historical museums. Dolls wearing Victorian smocks, muskets, brass knuckles, coffin plaques, eel stangs, even a lark lure, are among the more unusual things covering the gallery’s walls, while four of Perry’s trademark vases are interspersed around the floor. He has even created a child’s coffin inspired by the infant mortality of the era: “The Angel of the South”. Its title gives it away as a statement against Anthony Gormley’s “Angel of the North”, a popular public sculpture, but Perry’s terracotta-colored, infant-sized cast iron “coffin” also borrows imagery from medieval cathedrals and African bronzes. Against a grand public sculpture, Perry’s small statement about death seems all the more effective.

Like looking at old family photographs, there is a sense of melancholy about this exhibition, not to mention a Salem witch, sort of, haunting. What the sculptor has achieved though, has been to recast our understanding of his work, as well as to reinvigorate our sense of these old, functional things. The 2003 Turner Prize winner, one of London’s more renowned cross-dressers in his other guise of Clare, has been known for combining a traditional potter’s craft with “decoration” that speaks of social commentary. It is really Perry’s, or Clare’s, sense of wit that often carries off his engaging sculptures. This show, having inspired several new pieces, seems to point to some interesting new routes for the artist.