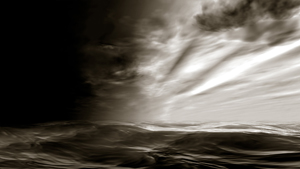 Julie Monaco’s dramatic landscapes, ranging from black-and-white to a deeply saturated blood-red monotone, are as theatrical as they are polished, Presented under Plexiglas, these slick compositions unfold with an impressive savoir-faire for cinematographic effects and chiaroscuro that direct our gaze from crisp light to darker shadows, all with a looseness reminiscent of spilled India ink. As our eyes travel the breadth of forms and nuances of color, the question arises: what exactly are we looking at? Are they aerial photographs of seascapes, mountain ridges, hurricanes? They are all larger than life, beyond the reach of human documentation, like snapshots from the center of a deluge. It comes almost as a relief to learn from the press release that these images are thoroughly artificial.

However photographic it seems at first glance, Monaco’s work does not represent nature but employs it as an abstracted source of inspiration. In this context, nature is a concept nourished by the artist’s experiences and emotions, an ideal of maximal expression. Monaco constructs each work from scratch with computer software. It is astonishing that something as fluid, organic and emotional as Monaco’s work is based on programming code, a fact that she doesn’t attempt to conceal. As Monaco’s titles, such as “cs_02/4” suggest, these are digital clones that, if successful, take on the guise of reality but shine a bit brighter, make more noise, and lead us into spheres that are otherwise inaccessible. These works are not altered reflections of life; they are science fiction.

The vivid skies, deep waters, and rough edges, all overlaid by a signature omnipresent haze, convey the impression that we are observing something equally familiar and mysterious, something that is alien in its perfection. It’s refreshing to see contemporary art that’s sprung off computer science and engineering skills but does not stray far from the aspirations of many of the old masters: the landscape as a vessel for spiritual beliefs and the embodiment of a private sanctuary, shelter, or retreat.

Monaco was born in Vienna, where she attended the Academy of Fine Arts in the 1990s before making her way to Los Angeles and focusing on computer animation. It is this balance between the nostalgic tastes of Vienna—home to creative melancholia and such eccentric minds as Schiele or Kokoschka—and Hollywood Surrealism that makes for such a potent art cocktail. For those wary of computer technology’s impact on art, Monaco’s work might prove an encouraging, if not eye-opening, experience.

Landscapes of the South

Landscapes of the South, a group exhibition on view at Mendes Wood DM, presents 27 compositions in which creators respond to natural settings. Diversity is found not only in artists’ origins, eras, and intents, but in their formal choices; the landscapes exhibited are nostalgic and deadpan, impasto and serenely smooth.

Pathetic refracts the story of the lovesick queen onto multiple characters ranging from adolescence to adulthood, each negotiating spiritual and bodily appetites as well as the social costs of growing older in a female body. The play explores “society’s sick need to experience female desire as embarrassment,” as Ásta Bennie Hostetter, production designer and founding company member, puts it.